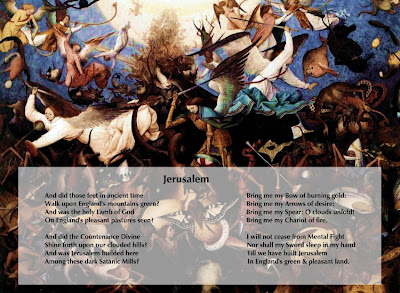 I quoted a couple of lines from "Jerusalem" in an earlier post but here's a fuller version, illustrated by Breughel. Today, it is sung as a hymn in British churches ( even at our wedding! ) but it was originally a bitter attack on repression and a plea for deliverance from outdated thinking.
For those who don't know of William Blake, he was a poet, painter, engraver, visionary ( literally - he saw angels at the bottom of his garden ), and religious iconoclast. And for an eighteenth-century Englishman his politics were amazingly progressive: he spoke out in favour of equality of the sexes, he opposed slavery and, although religious, he attacked organised religion ie the Church Of England. He also supported the French and American revolutions, a dangerous stance at the time.
I read Blake's Songs Of Innocence And Of Experience at A-Level, and his work made a lasting impression on me. His was a unique talent which, as usual, was barely appreciated in his own lifetime.
( This one's for Mickey Glitter. )
Posted by cerebus660 at 19:27

Oh, thank you! I am not familiar at all with Blake, except for Tyger, and often confuse him with wee Robbie Burns, though I'm not so sure why. Blake sounds like a pretty interesting fellow; I look forward to reading up on him.