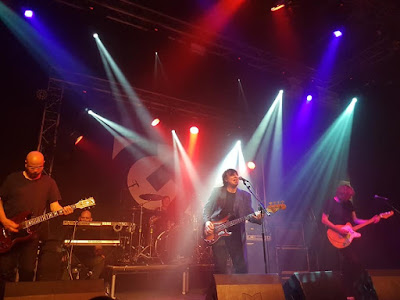 After the theatrical, stadium-rocking excesses of the Muse gig in part one of this epic series ( of two ) here's a very contrasting gig experience  -  Manchester's Chameleon Vox playing to an audience approximately 100 times smaller. Well, I say "after", but this gig was back in May... of course, this 'ere blog has never been known for a strict adherence to the laws of time.

The Chameleons were one of those early '80s post-Punk bands that I always saw mentioned in earnest, deadly-serious pieces in the music press, when rock journalists were desperately looking around for someone to replace Joy Division. And, like fellow potential pretenders to the Mancunian miserabilists' crown such as The Sound and The Comsat Angels, I didn't have the first clue what they sounded like. I suppose I may have heard The Chameleons on the John Peel show, sandwiched between Peruvian nose-flautists and angry Germans banging pieces of metal together and screaming, but they certainly didn't stay on my radar. My loss, really. So when The Chameleons ( or Chameleons Vox as this incarnation are actually called ) stopped off at me fave venue, the Gloucester Guildhall, I thought it worth the gamble to see what I'd missed all those years ago. 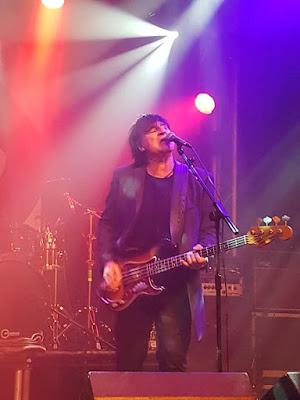 The other draw for me was the chance to catch up with fellow blogger David Rose, the mega-talented mastermind of David Rose's Gig Diaries. David is the veteran of over 1000 gigs ( puts my efforts to shame! ) and writes eloquently and passionately about music on a far more regular basis than I ever could. His blog has long been a favourite of mine and is a must-see for fans of music in general and live music in particular. David and I had briefly met earlier in the year at the triumphant Skids gig in the same venue, but this time we had more of a chance to hang out and have a proper chat. ( There was no support band that night so we stayed in the bar until Chameleons time. ) We had a fine time, yakking about our shared passions for music and comics, and discovering that on many occasions we'd both been to the same gigs, long before we'd met. One of the joys of blogging is hooking up with some lovely people, either virtually or in the "real" world, and it was a real pleasure to properly make David's acquaintance after following his blog for so long.

We moved into the sadly only two-thirds full main hall to watch The Chameleons shuffle onto the stage with very little fanfare. 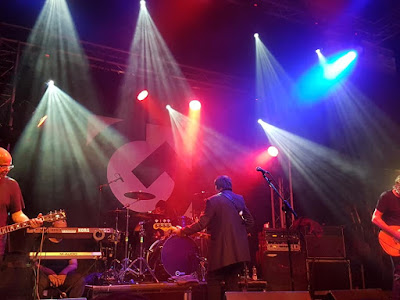 They were playing their third album, Strange Times, in full plus some other "hits". All this was new to me even though I'd given them a quick listen on YouTube prior to the night. Instantly we were transported back to the post-Punk days as the band conjured up an intense, dense sound  -  the pounding, tribal drums, melodic bass-lines and chiming guitars familiar to fans of the likes of Killing Joke or Theatre Of Hate. Mixed in with this familiar sound I could also hear hints of Folk and even Prog, adding unexpected colours to a music which could so easily be monochrome.
The typically reserved Gloucester audience ( well, typical for a certain age group ) took a while to warm up, even though many were clearly old school Chams fans ( can I call them "Chams"? ), but the epic, none-more-Goth Soul In Isolation did the trick and kicked the metaphorical doors open. The twisting, turning riff and windswept melodrama of Swamp Thing reminded me of early Big Country ( which is obviously A Good Thing ) with Mark Burgess' sturdy vocals soaring over the tune like an eagle over moorland. Or something. 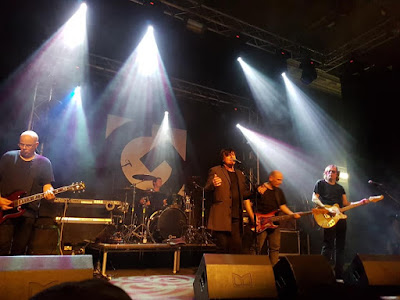 Although not the most loquacious of front-men, Burgess put on a mesmerising performance, every note seemingly wrenched from his soul via his lungs. From the little I've heard of The Chameleons' recorded output I'd say his voice is even stronger, more commanding and more nuanced than back in the day. The passion just blazed from the man and it was a privilege to watch.
The slashing, chiming guitars of Nostalgia ( surely an influence on The Horrors! ) heralded the end of a fantastic set and I walked out of the Guildhall converted  -  just need to track down some Chameleons music now. David and I chatted a bit more before parting ways, both agreeing that we'd just been spellbound by The Chameleons and needed to do it again some time. Great gig!
Posted by cerebus660 at 23:43 No comments: