Doctor Who: The Doctor's Wife ( review with spoilers ) 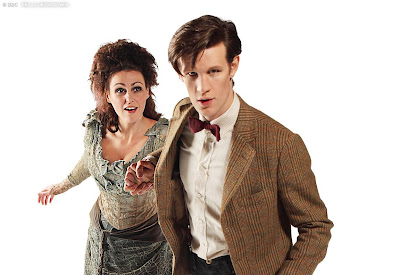 OK, let's make one thing absolutely clear. She's not his wife, there's no confetti, no wedding, no bridesmaids and definitely no sister-of-the-bride whose arse has its own Facebook page. Phew!
What we do get is a typically oddball story by world-renowned fantasy author and Goth godfather, Neil Gaiman. I must admit I've been looking forward to this episode even though I'm not one of those Neil Is God types. ( I liked a lot of his Sandman run and a few other comics, but I've never read any of his novels, which often look Clive Barker-lite to me. ) 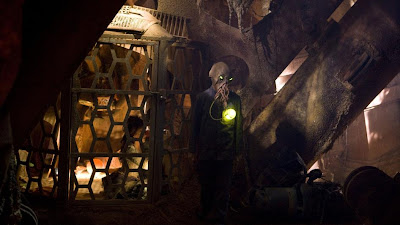 After a prologue introducing three suitably raggedy, Gaiman-esque characters ( and a random Ood! ), the story proper starts with the Doctor receiving the Time Lord equivalent of email from an old Gallifreyan buddy named The Corsair, and promptly plunging the Tardis down the plughole of the universe, to end up on a mysterious junkyard asteroid. The Matrix - the "soul" of the Tardis - has been drained out of the time machine by the sentient asteroid ( known as "House" but not looking much like Hugh Laurie ) and deposited in the body of Idris, a batty Bride Of Frankenstein lookalike played by the wonderful Suranne Jones.
"Biting is excellent! It's like kissing, only there's a winner..."
Idris is dismissed as mad and dangerous by Auntie and Uncle, her patchwork junkyard "family", but the Doctor soon realises there's something else going on. Her madness is reminiscent of a regeneration, as the Tardis' consciousness tries to make sense of being trapped inside a human body. As Idris becomes more stable, the Doctor realises he can finally communicate with his longest-serving companion, "his" time machine. Although, the way Idris tells the story, she abducted him all those years ago, not the other way around..... 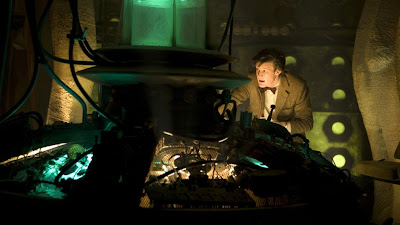 Although there are other elements to this story, like Amy and Rory being trapped and terrorised inside the Tardis by House, the heart of this episode is the strange relationship between the Doctor and Idris. And while this story is at times self-consciously kooky and ( typically for Gaiman ) short on plot but long on characterisation, the performances and chemistry of the two stars keep it all from collapsing under its own weirdness. Well, for me anyway. I know this is a real Marmite episode which you will either love or hate, but it's certainly evidence of the show taking risks with its own folklore and fanbase, which is probably needed every now and then to keep things from going stale. For me, it's preferable to Doctor-Who-by-numbers like last week's rather damp pirate tale.....

There's a lot to love in this episode: the "valley of half-eaten Tardises", the Doctor's naked emotion ( steady, fangirls/boys! ) as he watches Idris "die", the creepy scenes in the seemingly-infinite Tardis corridors, the console built from junk, and - best of all - this exchange between the Doctor and the human Tardis.....
"I just wanna say, you know, you have never been very reliable."
"And you have?"
"You didn't always take me where I wanted to go...."
"No, but I always took you where you needed to go!"
Oh yes! I've waited a long time to hear those words. Finally, the raison d'etre of the Doctor's adventures is spelled out! I almost punched the air at that moment..... but, of course, stereotypical English reserve prevented me :-)
Anyway, now I've calmed down, I'll award this controversial story:
4 and 1/2 Bow Ties out of 5
Posted by cerebus660 at 22:00

I do feel quite guilty about giving it a negative review now. I mean, I didn't enjoy it, but I like to spread light and cheer wherever I go. So, despite my misgivings about the episode, I'm glad that most other people clearly enjoyed it.


I'd have liked this line better if Alan Moore hadn't already used it in an issue of Top Ten (there was a "blind zen" taxi driver who claimed he wouldn't take you where you wanted to go, but where you needed to be.

The line about the TARDIS taking the Doctor where he needed to go, not necessarily where he *wanted* to go was the highlight for me. And the hope that the archived console room would be white-walled and holey or the wood-paneled room.

Oh, and exchange about the bunk beds. That was priceless. =)

I absolutely loved this episode and would have given it 5 out of five except that the TARDIS coridoors all looked the same which was a production problem, I know. (We can't spare the cash to make them all look different -- one 'Super Futuristic', one 'Regency', one 'Universal Monsters' and one 'Steampunk' -- that sort of thing. That's where I would knock off half a bow-tie)

Other than that I thought it was genius. Mind you, I love Marmite too, so what does that say about me?

Mmm. Marmite. I'd love a marmite and cheese sandwich right about now... with a big cup of really strong tea...

@Steve: No need to feel guilty, mate. You've got your own opinions and you stick to them, which is better than just following the consensus. And keep on spreading light and cheer - we could all use some!

@B Smith: I've only ever read 2 or 3 issues of Top Ten, so I didn't know that line had been used before. Perhaps Alan Moore was thinking about the Tardis when he wrote it? I'm sure many Doctor Who fans have had the same idea over the years, but it's never been stated so plainly on the show before.

@Mickey: Those bunk-beds are sure to inspire a flood of fan fiction ;-)

The line about not going where you wanted to go but where you needed to be is actually a quote from Douglas Adams, long before Alan Moore swiped it. Considering that Neil wrote that excellent book about Adams with Adams' full cooperation, this is clearly homage.

(Moore also "borrowed" clever lines from Gaiman on a few occasions without credit. The man is a magpie.)

I loved it. Sniff. If the Doctor turned out to be married to the TARDIS I could totally accept it. They have a strange and cool symbiotic relationship that doesn't contradict anything that went before. I especially liked the way she said she ran off with him, and the 'finish him off, girl!' at the end. Not a big plot but I don't care. I read Steve W's review and I agree that the aunt/uncle characters made me roll my eyes. Dickens. I blame Dickens. And possibly Marmite.

I should clarify that so far as I know, Moore never took anything from Gaiman without Neil's blessing and consent. And really, one of the biggest parts of being a writer is having a good eye and a good ear, so that when a clever idea or smart turn of phrase wafts by you can say "Ooh, that's a good bit, I can use that" and it goes into the mix. Nothing wrong with that so far as it goes. But if someone is being given credit for inventing an idea, and fingers pointed at someone else for borrowing it, those fingers want to be pointing in the right direction...

@ phantom_tiger and Richard: Thanx for the comments, guys!

I wonder if Matthew Graham's Doctor Who episodes will provoke so much interest...?
;-)