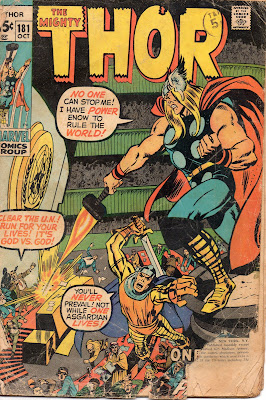 Ever since enjoying Kenneth Branagh's Thor movie a couple of weeks ago, I've been digging out some of the Thunder God's classic comic book adventures. This issue, Thor no. 181 - "One God Must Fall!" - holds a special, Asgardian magic for me as it was one of the first comics I ever owned, as well as being a great little mag in its own right. As can be seen from the scan above, my original copy is showing all the signs of its 40+ years age: ragged and worn with a damaged spine. A bit like its owner! I've long since bought a better copy but I couldn't part with the "original" - we've got history together :-)
Thor 181 is the last issue of the very short-lived Stan Lee / Neal Adams / Joe Sinnott collaboration, which served as a ( Rainbow ) bridge between Jack Kirby's and John Buscema's runs on the comic. Adams' dynamic, realistic artwork has its rough edges smoothed off by Sinnott's polished inking, presumably in a bid to keep the Kirby "house-style" intact, but is still a delight. Adams shifts the story from Earth to Asgard to Hades and back, equally adept at depicting the stygian depths of the Netherworld or the gleaming halls of the UN. And Stan has a ball with the usual sub-Shakespearian dialogue :
"Thou art elusive like the frightened fawn... But soon thou must tire... And then shall come thy fall!" 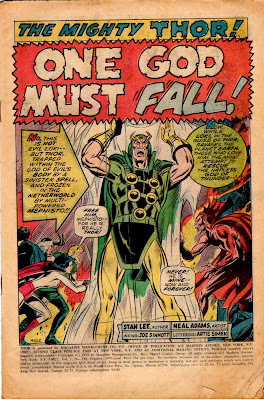 The plot is your basic "body-swap" tale. Loki has taken over Thor's body and is running riot on Earth, while poor old Thor ( in Loki's body ) has been condemned to Hell ( sorry, "Hades"... don't want to upset the Comics Code! ) by a righteously angry, but far from all-seeing, Odin. After the Warriors Three and Lady Sif rescue Thor/Loki from Mephisto ( "Begone! This stench of goodness sickens me!" ) and Loki/Thor has beaten Balder on Earth, the Gods of Thunder and Mischief face each other in a building site - and Neal Adams brings us this amazing full-page splash..... 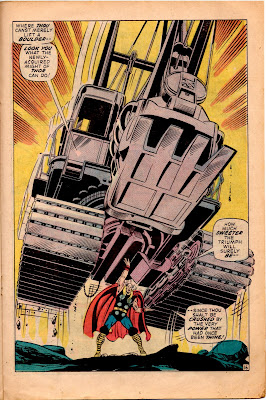 .....which blew my tiny mind when I first saw it!
Eventually, after taking a serious beating from Loki/Thor, our hero tricks his way back into his own body to proclaim:
"There is nothing in Asgard or Earth I cannot do... For I stand as Thor... the rightful God Of Thunder!"
Exit Loki with his tail between his legs.
The issue concludes with the usual ( at least, back then ) house ads, letter pages and Stan's Soapbox which, this month
( October 1971 ), concerns the formation of the Academy Of Comic Book Arts - "a forum, a fraternity, and a free-wheeling foundation upon which to build a greater-than-ever comic book medium."
So sayeth Stan!!
Posted by cerebus660 at 21:19

I am going to see Thor on Friday night and looking forward to it more than I'd thought. And as an aside, sort of: can you recommend any age-appropriate comics for a four-year old girl who just loves super heroes?

One of the main problems people of my age have with modern comics is that there's very little in the way of "entry-level" stuff for young kids. The majority of comics seem overly-complex, graphically violent and unable to present one-off stories that will grab new readers' attentions. That's all fine as far as it goes for adolescents and adults, but younger kids, who could be the future of the industry, are missing out.
Er, rant over.

Saying that, I think Marvel may still be publishing a Super Hero Squad comic, based on the TV cartoon series and featuring very kid-friendly versions of Thor, Iron Man etc. But that's probably about it, really...