Doctor Who: Day Of The Moon ( review with spoilers ) 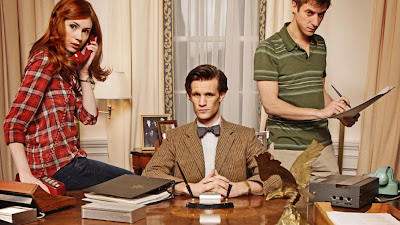 Cliffhangers: they're strange things. Steven Moffat certainly thinks so. He's very good at writing tense, exciting cliffhangers, but he doesn't seem keen on resolving them. This worked well in Season Four's Silence In The Library / Forest Of The Dead where the story jumped from the cliffhanger of Donna Noble's "death" to the strange, virtual world she found herself in. The sheer oddity of the situation left the viewer wondering where Donna was and how she got there, which sidestepped the "with one mighty bound he was free"-type of cliffhanger resolution.
This week's episode begins three months after last week's cliffhanger. Amy, Rory and River are on the run from the authorities, while the Doctor is being held prisoner in Area 51. This is a great, pacey opening to the story, with more beautiful visuals in the Utah desert, and another chance to see River perform her party-piece of leaping out of a spaceship/skyscraper. Unfortunately, it's a bit of a cheat. We see a very short flashback to the time travellers escaping from the Silence in the warehouse in Florida, but this truncated resolution to the cliffhanger begs too many questions: 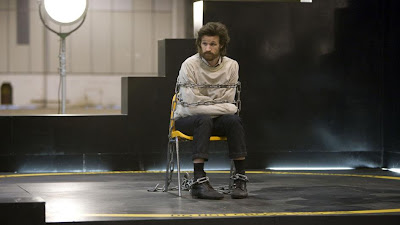 What happened to Rory? The last we saw, he was trapped in underground tunnels, surrounded by the Silence, with River screaming his name. How did he get out?
How did Amy get from Florida to Utah? And why? ( Apart from the obvious reason that the production team was making the most of their location filming. )
What was River doing in New York, apart from possibly having cocktails?
If no-one can remember the Silence the second they turn their backs on the aliens, how did Team Tardis compare notes on their enemies, let alone even realise they had enemies?
Even though the image of a bearded, manacled Doctor, imprisoned in Area 51, is an incredibly powerful one, it makes little sense. Why was he captured but not the others? And how?
There are, indeed, more questions than answers..... 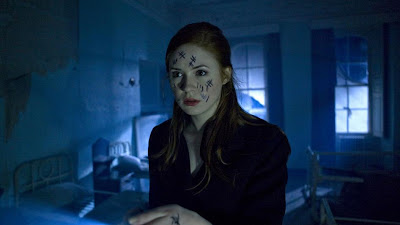 That said, I really did enjoy the rest of the episode. The scenes of Amy wandering the deserted Southern Gothic children's home were very creepy, especially the image of the obscenely bald Silence hanging from the ceiling like bats. And the story moved from an X-Files sensibility to a Twin Peaks-type surrealism as the mystery of the little girl deepened and a ( wibbly wobbly timey wimey? ) eye-patch-wearing woman appeared and disappeared before Amy's eyes.
Matt Smith's Doctor was as wonderful as ever, sharing some tender scenes with Rory and Amy, escaping with ease from a "perfect prison", poking gentle fun at Richard Nixon, and thwarting the Silence's plans with a little help from Neil Armstrong's foot. And he looked cool with a beard.
River got some moments of quiet poignancy ( her "last kiss" with the Doctor ) and a chance to kick butt, as seen below..... 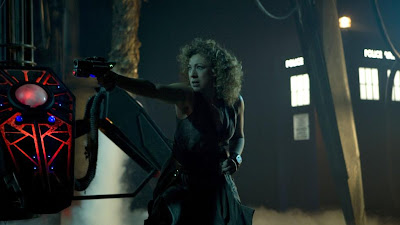 Although my questions about the cliffhanger will probably never be answered, the episode also posed more questions that will surely form the arc plot for this series. Why did the Silence have their own version of the faux-Tardis seen in The Lodger? Is their threat really over? They did take control of the Tardis at the end of the last series, after all, and they seem to have prior knowledge of the Doctor. Why did they need Amy to tell the Doc about her pregnancy? How does Canton come to be at Lake Silencio in 2011? And just who ( or Who? ) exactly is the little girl, last seen seemingly regenerating in a New York back alley? There are a lot of threads to pull together there but I'm still confident that Moffat can sort it all out by the end of the series. We've still got 11 episodes to go.....
Notwithstanding my earlier questions, for the creepiness, the fantastic visuals and the intriguing mysteries, I'll give this episode:
4 out of 5 Bow Ties
Posted by cerebus660 at 23:52

Another unanswerable question from the cliffhanger: under what circumstances would Rory be willing to separate from Amy during a dangerous situation? Wouldn't he have insisted on being with her?

As for the bearded Doctor…I'd prefer to think he wasn't captured all that long before we saw him, and the beard was just something he adopted while carrying out the same intelligence gathering mission as the others were doing. It's more Doctor-like than having him just sit around while the others are on the run. But most of all, I don't want a Doctor who needs to shave in the TARDIS lavatory every morning. I can accept him inducing a beard to grow in order to look like he's trying to disguise himself sooner than I can accept a stubbly Doctor with five o'clock shadow. There's such a thing as humanizing the Time Lord too much…

I've got a horrible feeling that the reason we got the big gap between the end of last week's show and the start of this is contained in Rory and River's baffling escape.

They were clearly "got" by the Silence at the end of last week's episode but were running around free and well at the start of this. It seems unlikely that Moffat somehow forgot about what happened to Rory and River before he wrote this week's episode, so you can only assume that something vital happened in the wake of that scene, which he's choosing to keep from us in order to do a big reveal about it later in the series. Gaah!

@Richard: I don't think growing a beard humanises the Doctor too much. Well, not as much as catching a glimpse of Jon Pertwee's Royal Navy tattoo in Spearhead From Space ;-)

@Steve: I expect you're right about the Rory/River situation. I just hope piling mystery on top of mystery doesn't put off the casual viewer ;-(

The woman with the eyepatch said something like: "She's probably dreaming." I hope that doesn't mean that Amy is in some sort of Matrix-like dream state and that all the episodes of the season will turn out to be one wacky dream she's having while being held under sedation or something.

That'd be very "Life on Mars" but it would kind of suck for Doctor Who.