Doctor Who: A Christmas Carol ( review with spoilers ) 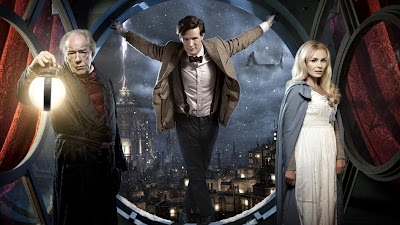 "Half way out of the dark....."
This year's Doctor Who Christmas special is probably the most Christmassy episode yet, a strange fairy tale fuelled by mince pies and eggnog. ( Whatever that is. )
Amy and Rory are trapped on board a doomed starliner with 4000 other passengers, their only hope the miserly ruler of a Dickensian colony-world, Michael Gambon's Kazran Sardick. But he's not interested. The Doctor falls down Sardick's chimney and becomes a cross between Father Christmas and the Ghost Of Christmas Past as he attempts to change Sardick's mind and save the day. 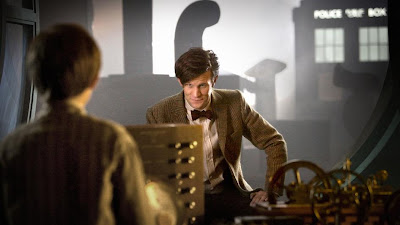 "Christmas Eve on a rooftop. Saw a chimney. My whole brain just went: 'What the Hell!' Don't worry - fat fellow'll be doing the rounds later. I'm just scoping out the general... chimney-ness!"
The Doctor realises that Sardick, like Scrooge before him, is an essentially good man who has become twisted and embittered but is not beyond saving. Jumping back into Sardick's past, the Doctor endeavours to steer his life in the "right" direction, inadvertently causing more heartache for the future miser by sparking a romance between Sardick and the lonely - and lovely - Abigail Pettigrew.

The heart of the story ( and the reason the regular companions are sidelined ) is this romance between the young Sardick and Abigail, as played by Welsh mezzo-soprano Katherine Jenkins. In an episode where Matt Smith and Michael Gambon are dependably excellent, Jenkins - with no previous acting experience - is the real revelation. Her character is cryogenically frozen by Sardick's tyrannical father, but the Doctor manages to unfreeze her every Christmas Eve over a number of years. Jenkins' performance of a woman living on borrowed time is genuinely touching and helps to ground the more outlandish aspects of the story..... 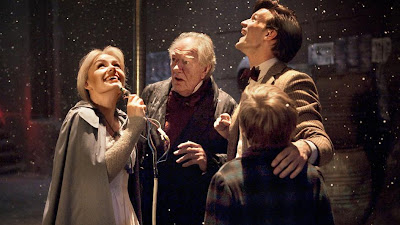 .....Including flying sharks.
Yep, only Steven Moffat could write a Who story based on Dickens, but replacing foggy London with a planet where fish swim about through fog-like atmospheric crystals. This leads to one of the maddest scenes of recent years: a world famous opera-singer, kneeling in dry-ice, singing to a model of a flying shark. At Christmas.
So, it's a strange, romantic and unusually low-key Doctor Who episode. Which is fine by me. After the hysterically escalating threat-levels of the RTD era ( the end of time, the Reality Bomb etc. ) it's good to see the series producing small-scale human stories for a change of pace. Not to say the episode is mundane - the steampunk look of Sardick Town is beautifully realised and the effects of Sardick's atmosphere-controlling device and the Doctor's wild sleigh-ride are gloriously surreal.
It's a wonderfully weird Christmas present for children of all ages.....
"Fish that can swim in fog. I love new planets."
4 Out Of 5 Bow Ties. ( Or Mince Pies )
Posted by cerebus660 at 19:52

I'd planned to skip the Christmas special, but inclement weather worked its magic and trapped me at my mom's place just as the show was starting, so I shed my jacket and returned to the couch and watched. It was a good story and I loved the tie-in to Dickens and all that, and yes, I cried a little towards the end (like I've done with so many of the revival shows), but...well, after it was over, I have to say my favorite part was when Kazran appeared one Christmas wearing a long, Tom-Bakerish scarf. I tend to like those types of nods to the classic series the best of any new show, to be honest. I'm so old-school. =) However, I enjoyed your review and the screencaps and a little information about the lovely Katherine Jenkins. And despite myself, I am looking forward to the new season, especially those creepy doll things I saw in the previews.

Hope you had a lovely Christmas and are gearing up for a grand New Year, my friend!

Hi Mickey!
Steven Moffat does seem to be sneaking in more and more references to old-skool Who. The 4th Doctor scarf was a fun little reference,as was the mention of "Isomorphic controls" - an in-joke for fans of The Pyramids Of Mars :-)

Yeah, we had a good Christmas thanks, all things considered. We've got Sarah's Nan's funeral to deal with tomorrow :-( and then we can start to think about the New Year. We're having a party on New Year's Eve ( planned weeks ago and so unavoidable ) which should hopefully end this bloody awful year on a good note...

I loved the Christmas Special this year much more than I thought I would. Despite s strong first season in the role I think Matt Smith is really only now starting to find his footing. Looking forward to the new season.

Try to have a Happy New Year, my friend!

@M.D. I'm definitely looking forward to the next series of Who - that trailer at the end of the Xmas episode looked very interesting, especially the Utah footage. Matt Smith has said a few times in interviews that he wants to keep the character of the Doctor moving forward and doesn't want to let it get stale. A good omen.

And thanks for your kind wishes, mate. Much appreciated.

I totally missed the "Isomorphic controls" reference, but you can bet your bottom dollar if it had been a reference to any Sarah! Jane! outfit (or Liz outfit, for that matter), I would have gotten it. HA!

*hugs to you and your family for tomorrow*

I couldn't work out why the Doctor didn't just load everyone on the spaceship into the Tardis (which, as we know, is very big inside) and land them safely on the planet, thus saving a lot of time, effort, and trips back and forth through time. Admittedly this would have made for a very short episode.
Also, why only the one episode this christmas/new year?

I think there was some very short explanation for why he couldn't save them with the Tardis, but this was drowned out by the usual overly-loud music and sound effects. Perhaps they thought no-one would notice :-)

The two episodes last year were unusual, really, being part of the end of the 10th Doctor era, and needing more time for all the blubbing and hand-wringing... sorry, I meant to say "plot"...

Thanks for the comment, Mark. Hope you are well and had a good Christmas. Best wishes for 2010 - perhaps we'll meet up at a gig sometime soon...