So what's been going down in Groove Town lately? 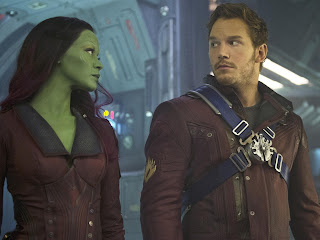 Alien sex!
No, not really. I just needed an internet-ready, clickbait phrase to grab your attention. It's shameless I know. ( Plus, I've been having that dream about Gamora, Nebula and a bath full of warm custard again. When will it ever end? )
Ahem! Now that we're all here ( who am I kidding? ) I thought I'd just zip through some random rubbish from recent months to hopefully atone for the pathetic lack of blogging activity around these parts lately. I'm going to start with

Oscar Bait: Recent Movies
The last two films I saw at the cinema are, on the face of it, very different but on closer inspection have much in common. The main thing they share is an obvious hunger for awards, specifically Academy Awards. And nothing wins Oscars so much as suffering  -  something these two films have in abundance...

For those who've been off-planet in recent months, The Revenant is the latest movie from Birdman director Alejandro Gonzalez Inarritu. Based on a true story / tall tale ( delete where applicable ) of the 1820s it stars Leonardo De Caprio as frontiersman Hugh Glass, who is attacked by a bear while on a fur-trapping expedition, then betrayed and left for dead by his colleagues. The film is mostly concerned with his fight for survival in the wilderness of the American north and his quest for vengeance. And snow. Lots of snow.
After the almost claustrophobic, limited theatre-set environment of Birdman, Inarritu goes in the opposite direction and films the majority of this movie in the open air. Characters are dwarfed by vast landscapes, half-drowned in rapids, frozen by snow, warmed by steaming animal carcasses, fall off cliffs, and all the while are followed by the camera which twists, turns, ducks and dives to keep up with them. It's a gruelling enough experience just to watch so it's hard to imagine how much proper thespian suffering Leo went through on the path to his well-deserved first Oscar. Tom Hardy, Will Poulter and Domnhall Gleeson also give fine performances underneath all the whiskers and frost. Although overlong The Revenant is a truly epic movie with a surprisingly emotional core and lashings of testosterone... something that's in shorter supply in my other recent movie experience... 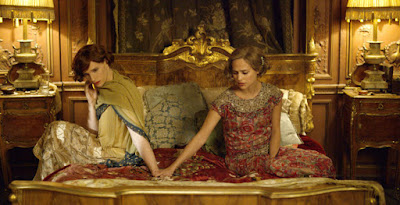 The Danish Girl is another loosely-based-on-a-true-story film with added, Academy-approved suffering. As I'm sure most of you know, Dear Readers, Eddie Redmane plays transgender Danish artist Einar who struggles with his / her art and identity, while his wife Gerda struggles with loving a man who is changing and growing apart from her. There's a lot of struggling going on here. It's all very tasteful and sensitive but probably could have done with a bit more verve and transgression. Redmayne is perfectly fine as both Einar and his alter ego Lili but I have to admit I'm never totally convinced by the actor. I found him to be a bit of a wet fish in My Week With Marilyn and he was hopelessly miscast in the BBC's version of Birdsong. Maybe that one great role which will justify all the hype is just around the corner? Alicia Vikander, however, is a revelation. Her bruised, loving, steadfast Gerda is the most fully-rounded character here and is the warm, beating heart of the film.She more than deserved her Oscar here... but for Supporting Actress? Surely it should have been Leading Actress? Anyway, I hope to see far more of her in the future.
So, the lesson here is Suffering = Oscars  -  tune in next year for more misery :-) 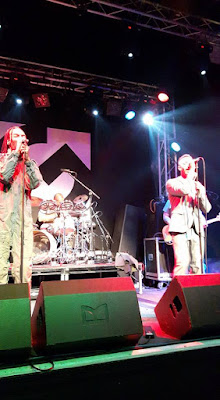 What better way to cure the Winter blues than to see The Beat bring a taste of the Caribbean to grey old Gloucester? ( Specifically my home-from-home, the wonderful Guildhall Arts Centre where I also saw The Danish Girl ) I've seen The Beat about half-a-dozen times and they never fail to entertain or get me to move my feet and shake my arse. ( Not a pretty sight! ) After some fairly underwhelming reggae from locals King Solomon's Band, the Brummie ska heroes bounded onto the stage to a hero's reception and promptly raised the Guildhall's temperature to 1000 degrees. Approximately. 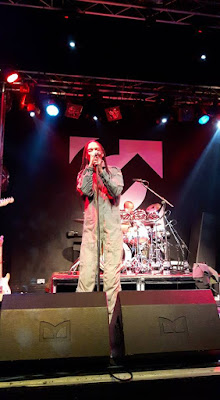 Their music was as exciting and infectious as ever, with Ranking Roger and Ranking Junior clearly having a ball as they raced around the stage and bounced up and down like hyperactive toddlers, bringing us their good vibes and messages of unity. ( Although some in the crowd were disappointed that Roger didn't take his top off this time... ) They played all their hits  -  you know the ones!  -  and other live favourites like Two Swords, Monkey Murders and their skankin' cover of Rock The Casbah. And we loved it! All too soon, after the familiar closing rave-up of Jackpot, they were gone and we stumbled, steaming, out into the freezing February night.
Here are me and my gig buddy and great friend Caz, down the front  -  where else? 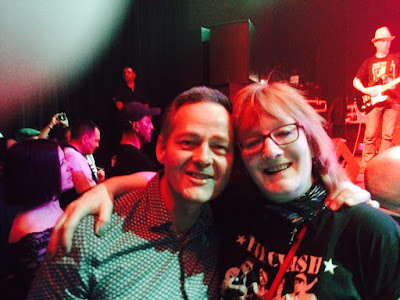 The next night, Caz and I were out again, this time to see local Punk superstars Borrowed Time at Gloucester's grotty Lower George pub. Rob, Glenn and the other BT boys get better each time I see them, writing new songs and always pushing their sound forward. They seem to be giging constantly and, with the addition of human drum-machine Marcus, only sound tighter and tighter. Here they are at the Lower George ( formerly known as The Pig Inn The City... ) giving it some welly. ( Or not in Rob's case as he's always barefoot... ) 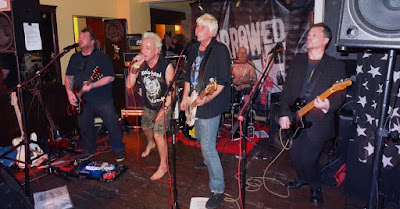 Headliners that night were Eastfield, a strange Punk band with an Anarcho sound whose songs are all about trains. Yep, trains. Although I think one was about Burt Reynolds but I couldn't swear to it. Anyway, it was all good fun. Here are Eastfield in all their glory... 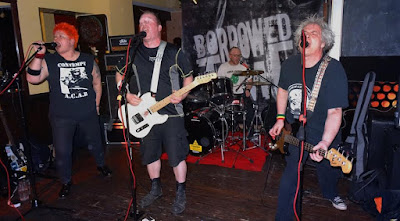 ( These last two photos aren't mine  -  I nicked them from the Facebook page of local photographer John Plane. I'm sure he won't mind as the back of my head features in many of his shots and I haven't asked for any royalties... )
Following this gig I headed up to the lovely Cafe Rene with various other people who should know better ( Caz, Mark, Sam, Nicky ) to see a band with the unpromising name Johnny Kowalski & The Sexy Weirdos... 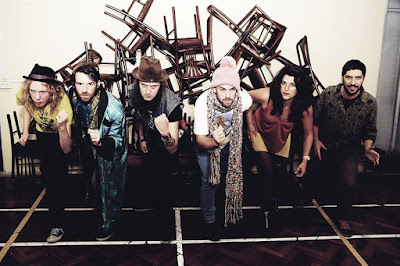 This is a band who describe their music as "ska / balkan / punk / rock 'n' roll / mariachi / carnival"  -  phew!
-  which pretty much sums them up. They were fantastic! An absolutely insane mash-up of genres and styles played with infectious glee and boasting some superb musicianship. But, most of all, fun! The Rene was completely rammed with punters and became an inferno, everyone was dancing, spinning round, spilling drinks, girls were taking their tops off, somebody grabbed the mike to start a debate about Jeremy Corbyn, it was chaos! In a good way. Definitely the most fun I've had at a gig for a long time, I'd highly recommend Johnny & Co. for anyone who wants to dance the night away while grinning insanely. And who wouldn't?

Soundtrack: Complete Surrender by Slow Club
( I'm going to see them again in May with my good friend Tom. Yay! Also lined up for this year are Muse in London, Bruce Springsteen in Coventry and  -  get this!  -  the Dandy Warhols in Amsterdam! So excited! ) 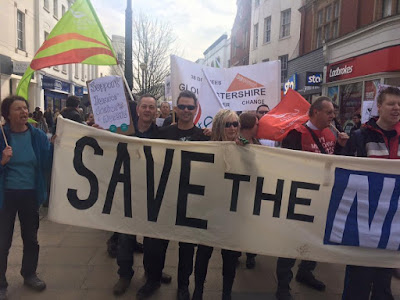 Three years ago this week I was finishing my last week of radiotherapy at Cheltenham General Hospital.Today I marched through Cheltenham in support of the NHS in general and junior doctors in particular. The NHS has helped all of us*, has touched all our lives, whether we realise it or not. Don't let the Tory profiteers degrade and dismantle this wonderful British institution. Stand up and be counted!

*Obviously this applies to UK readers of this 'ere blog :-) 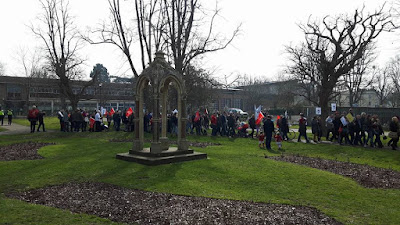 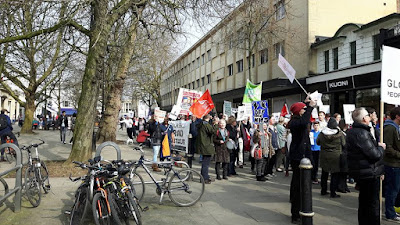 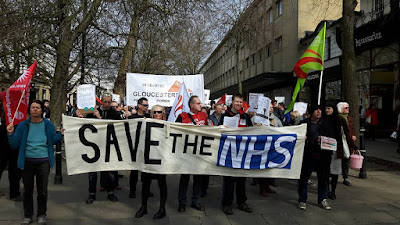