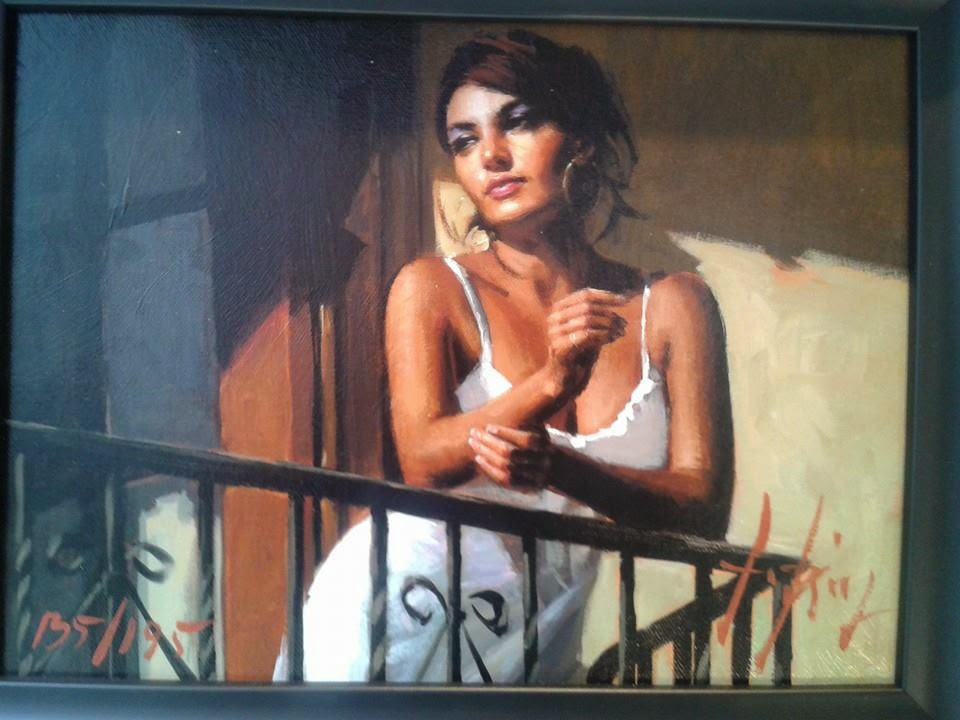 Argentinian superstar artist Fabian Perez is currently doing another tour of the UK, so Sarah and I headed over to the ever-wonderful Whitewall Galleries in Cheltenham to see his latest exhibition.
( And it gave Sarah yet another chance to swoon over the Johnny Depp-alike great man himself. ) 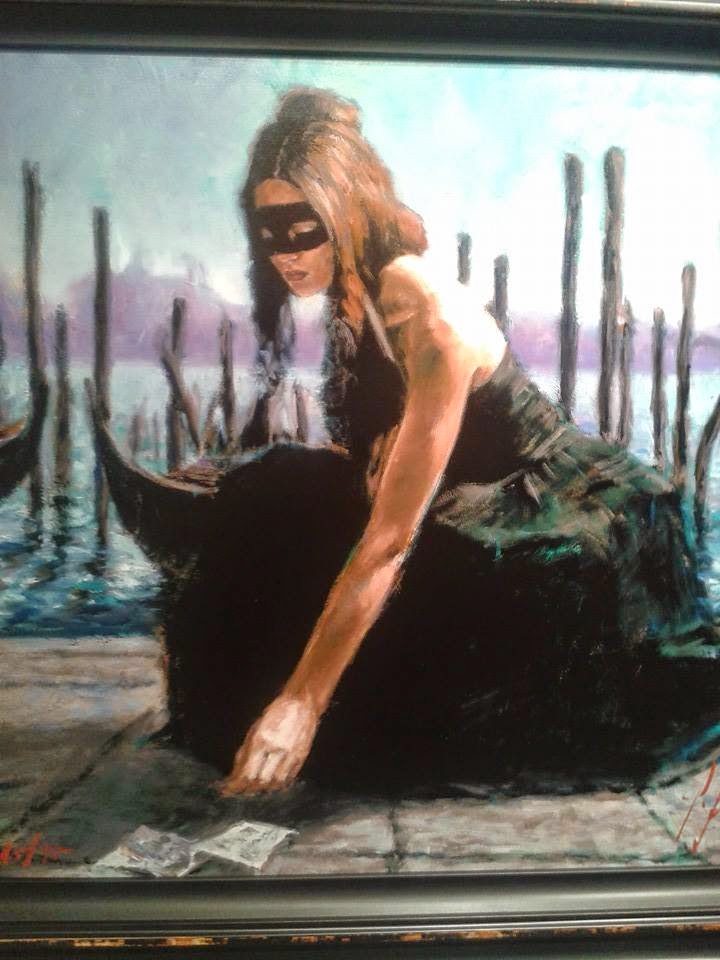 As ever, the gallery was rammed with people admiring the artwork and sculptures, drinking free champagne and hoping to meet and greet with the always-approachable and friendly Fabian. The new collection was up to his usual high standards with his trademark cast of sultry, romantic characters in beautiful, atmospheric locations. We were particularly taken by the masked Venetian lady above. The original oil painting was selling for just under £8000, while a pen and ink study for the piece was going for about £1300. Sigh! We just have to keep on dreaming... 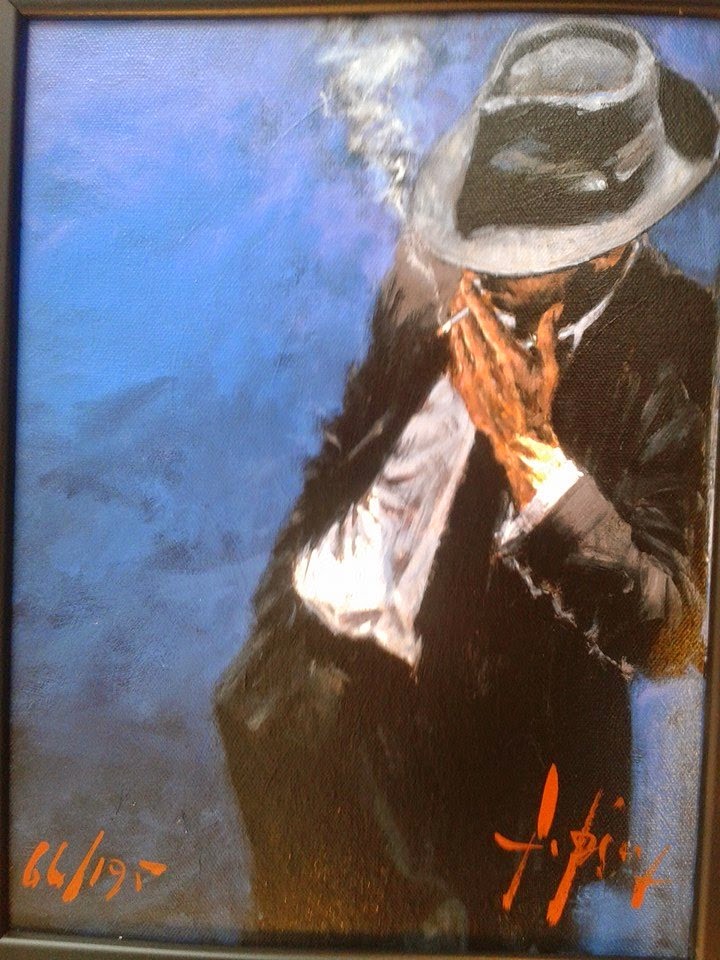 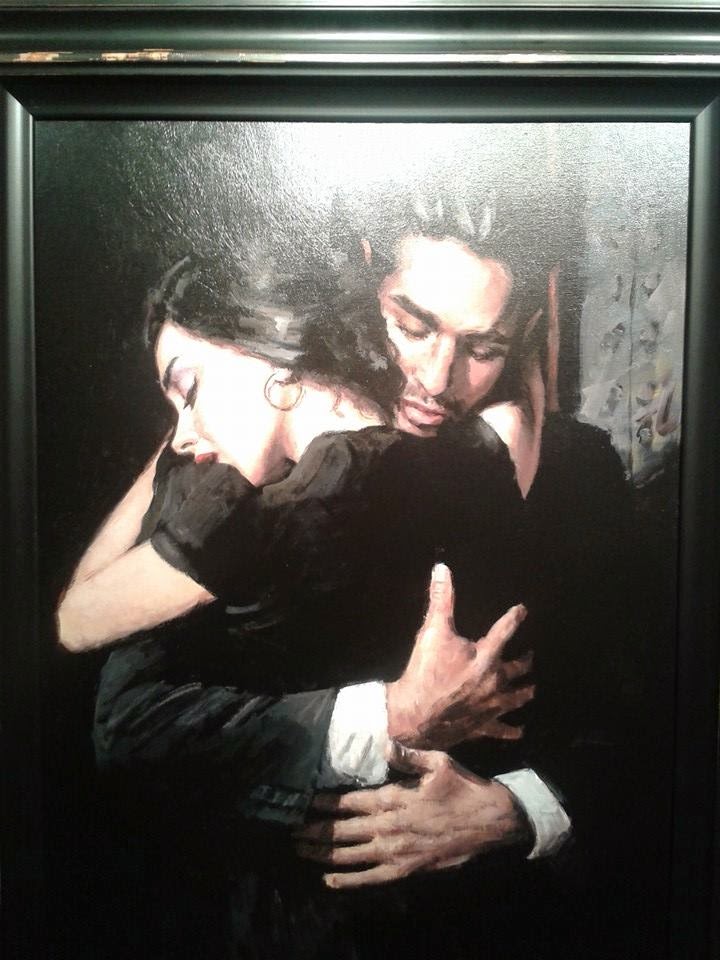 We also really liked this one, The Embrace, but I couldn't do it justice in the photo, as a light shining on it tended to bleach out the colours. There's nothing like seeing a painting for real! 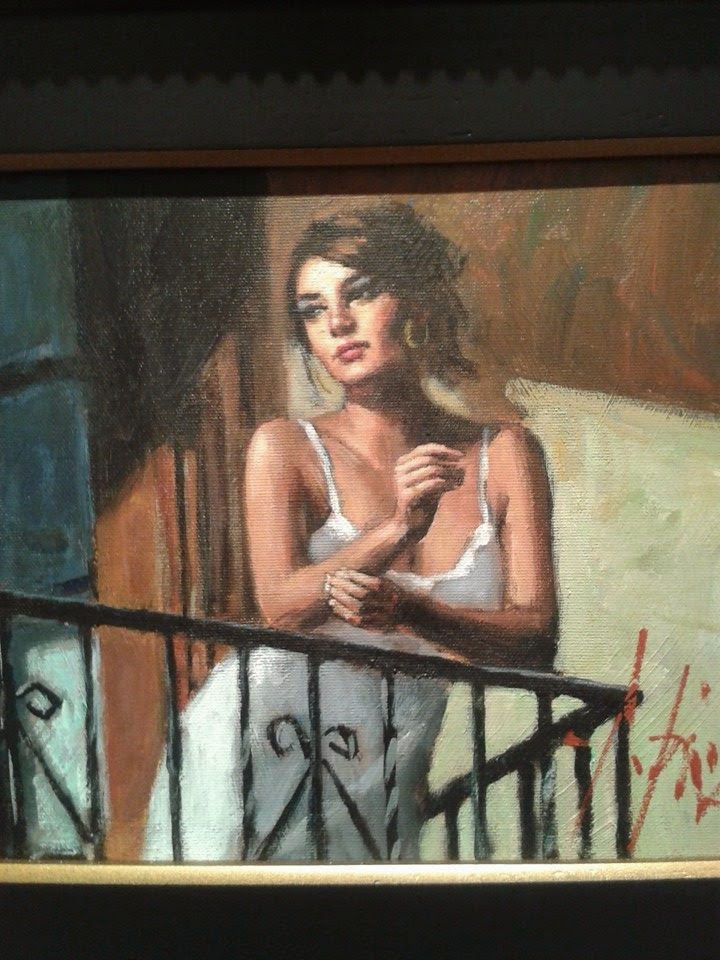 Likewise, this painting of Fabian's muse, Saba, is the original, while the piece at the top of this post is a print. 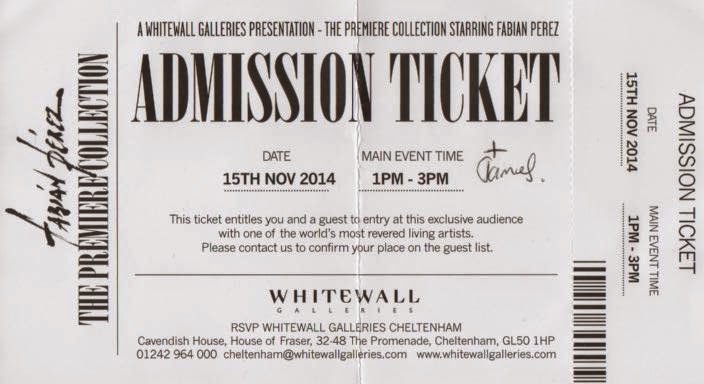 Here's our invitation to the event. James was going to come with us, but at the last minute decided to go out with a mate instead. Kids! Anyway, we had a great time at the exhibition and, thinking of the Venetian lady, went for a lovely Italian meal afterwards. Same time next year...?
Posted by cerebus660 at 16:40 2 comments:

My grandad's World War One medal 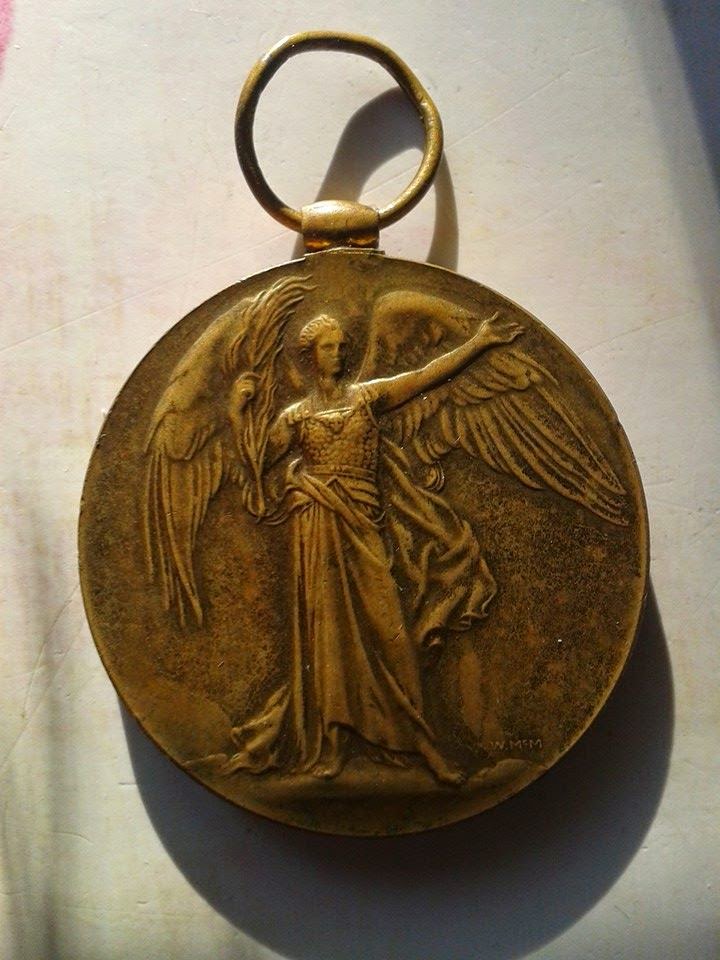 Doctor Who Reviews Roundup: Tombs, trees and a tiny Tardis 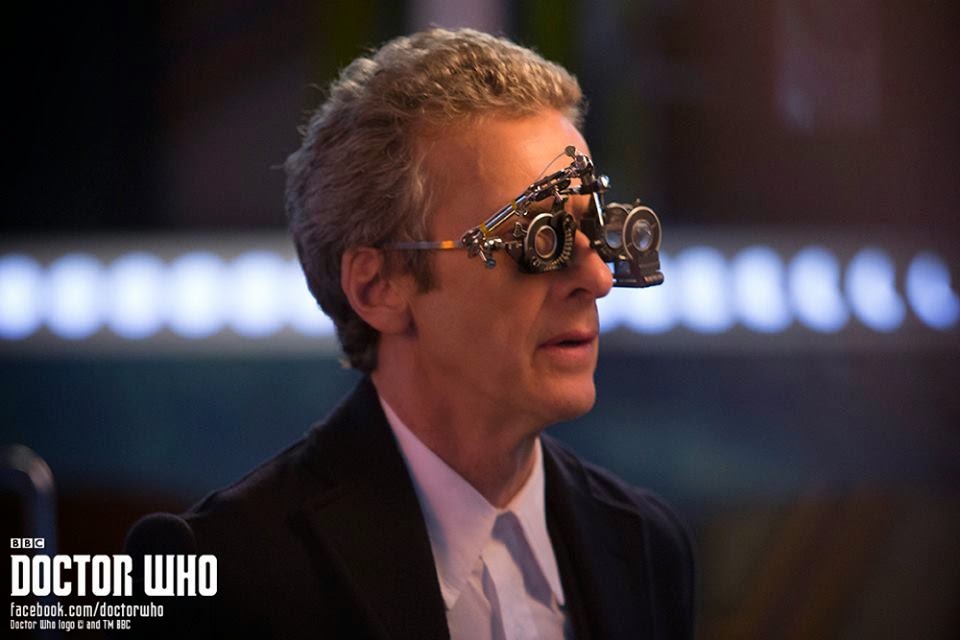 My Doctor Who reviews have got lost in the time vortex yet again but, using cutting-edge temporal physics and huge amounts of Artron energy I've managed to re-materialise them here for your reading pleasure, just ahead of the series finale. The lengths I go to for this 'ere blog... 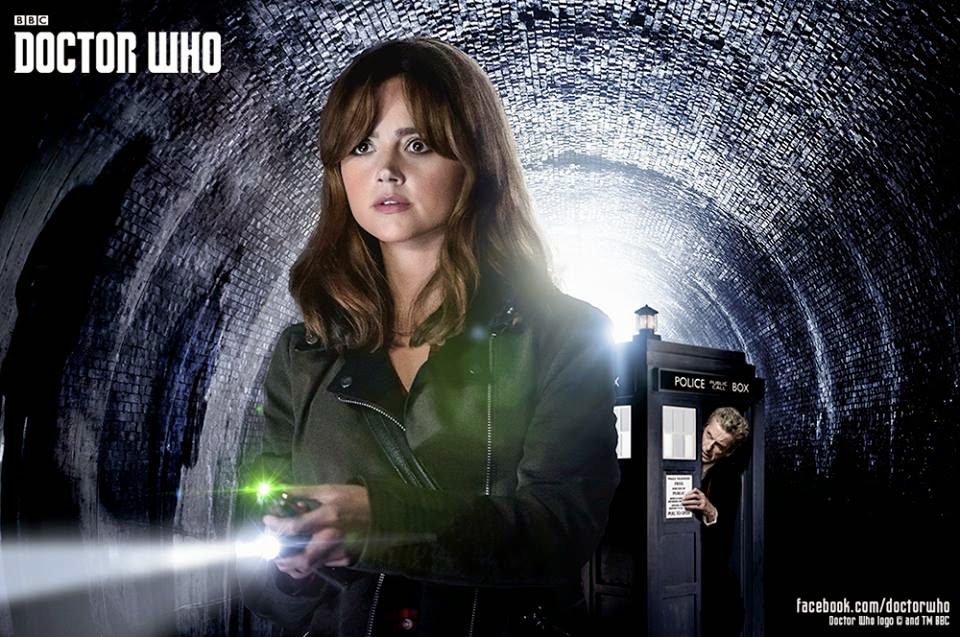 Flatline
After plunging into 3D for the 50th Anniversary last year Doctor Who explores another relative dimension in this creepy episode. People are mysteriously disappearing from a Bristol council estate and the Doctor is trapped inside a dimensionally-challenged Tardis, leaving Clara to step up and solve the riddle.
Although this episode seemed superficially similar to worst-21st-century-Who-story Fear Her ( I'm yawning just thinking about it ) it turned out to be a small-scale treat with some clever ideas ( 2D creatures invading a 3D world ), fine performances from the leads ( "I'm the Doctor, but you can call me Clara" ) and a genuinely disturbing, unknowable enemy in the Boneless. And the Addams Family gag had us all roaring. On the evidence of this episode and the previous week's Mummy story, scriptwriter Jamie Mathieson is a welcome addition to the Who writing team. In fact, this series is notable for new writers, with excellent work from Peter Harness ( Kill The Moon ) and also the newbie behind the next episode... 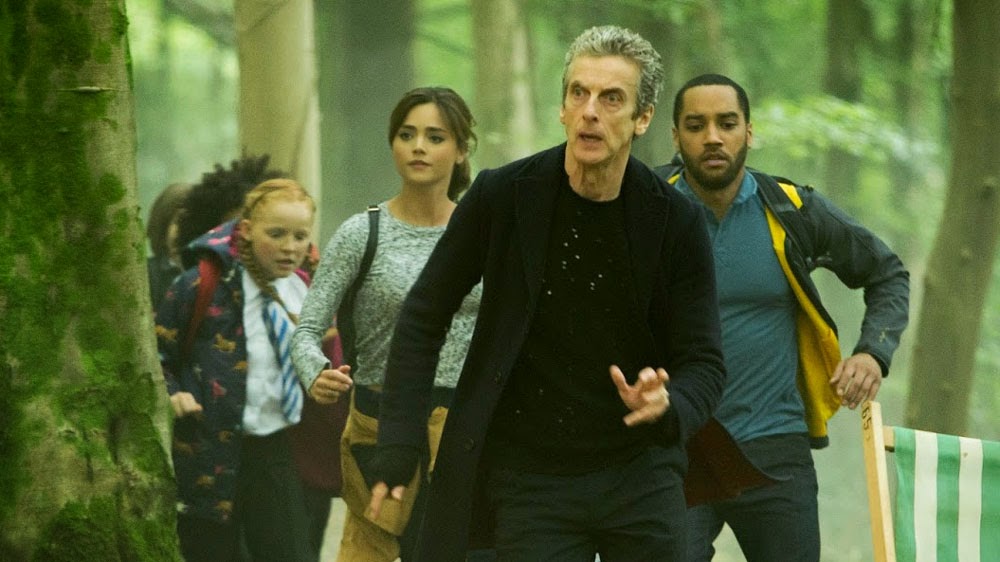 In The Forest Of The Night
Frank Cottrell Boyce was a surprising choice to write new Who as he is primarily known as a children's author and the writer of the 2012 London Olympics' opening ceremony. However, with this unusual story he has created something new for the show, a truly different take on the old "invasion of Earth" plot, with some genuinely magical moments. I couldn't help but think of Where The Wild Things Are as a world-wide forest grows overnight to cover the planet, and Clara, the Doctor and Danny find themselves in a London overwhelmed by trees... 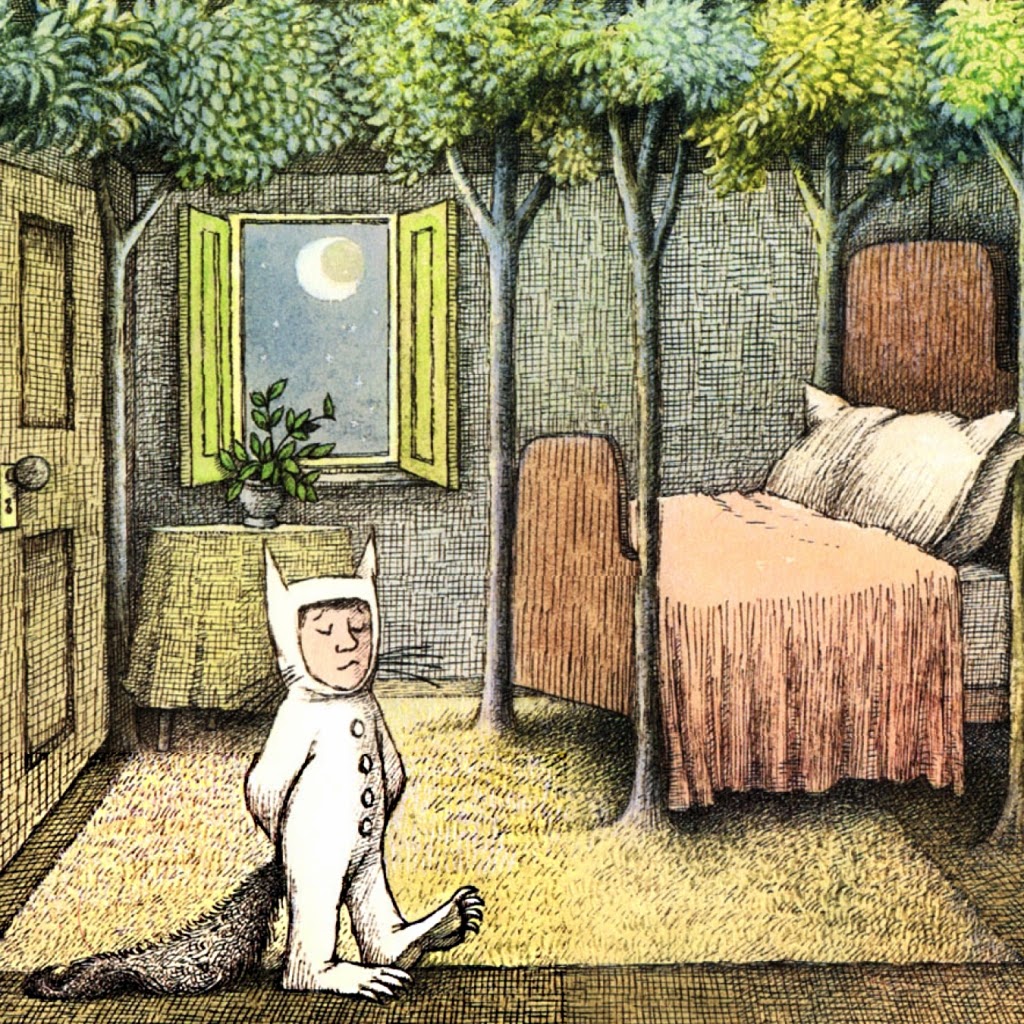 Almost harking back to the twisted fairy tale vibe of Matt Smith's first series, this story is a beautiful exploration of primal, childhood fears of the deep, dark woods with just a twist of that 12th Doctor harshness. Capaldi's Doctor is in fact showing more signs of softening here, interacting on a surprisingly human level with Danny's pupil, Maebe, the young girl whose visions are the solution to the arboreal apocalypse. Clara's character, on the other hand, is seen to be drifting further from humanity ( due to too much time spent with the Doctor? )  -  more concerned with the mystery and the wonder of the crisis than protecting the Coal Hill School children. Director Sheree Folkson creates a gorgeous vision of an unnaturally leafy London and hopefully is another talent ( like these new writers ) that the show can hang on to. 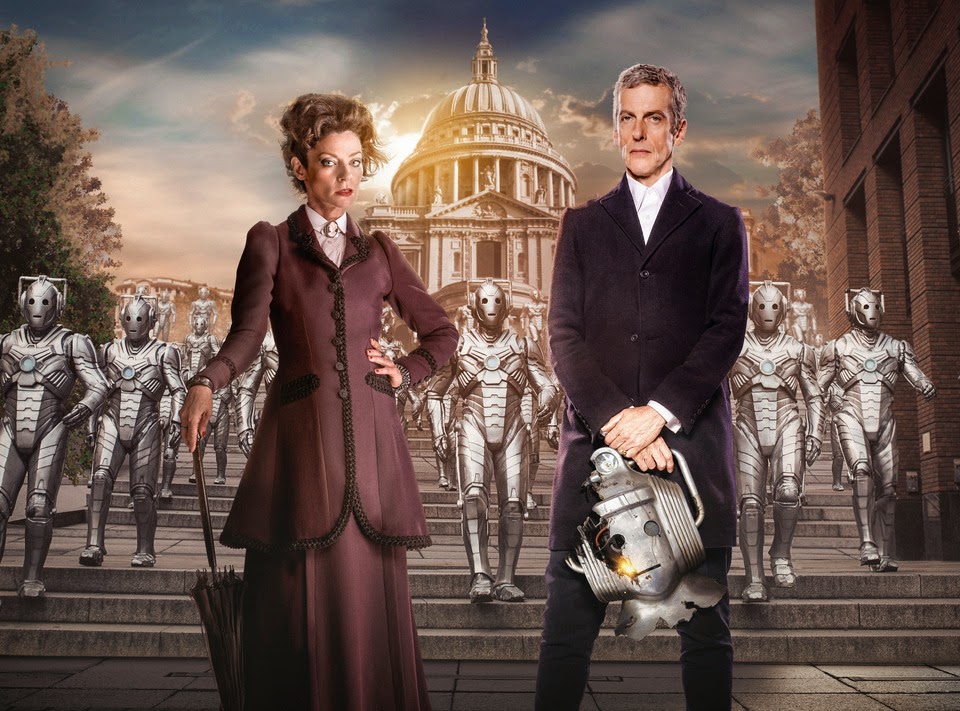 Dark Water
At last we have a two-part series finale again! It's been a long time. In this episode the mysterious Missy ( the ever-crazy Michelle Gomez ) finally takes centre stage as we see what she's been up to for these past 11 episodes. And it's not good.
The story starts with a shock as Clara's boyfriend, soldier-turned-maths-teacher Danny Pink is knocked down and killed by a car. ( That'll teach him to mess about with his mobile instead of watching where he's going! ) Consumed by grief, Clara demands the Doctor bring him back  -  "Time can be re-written" and all that. The Doctor goes one better, however, and attempts to break into the afterlife to find him... 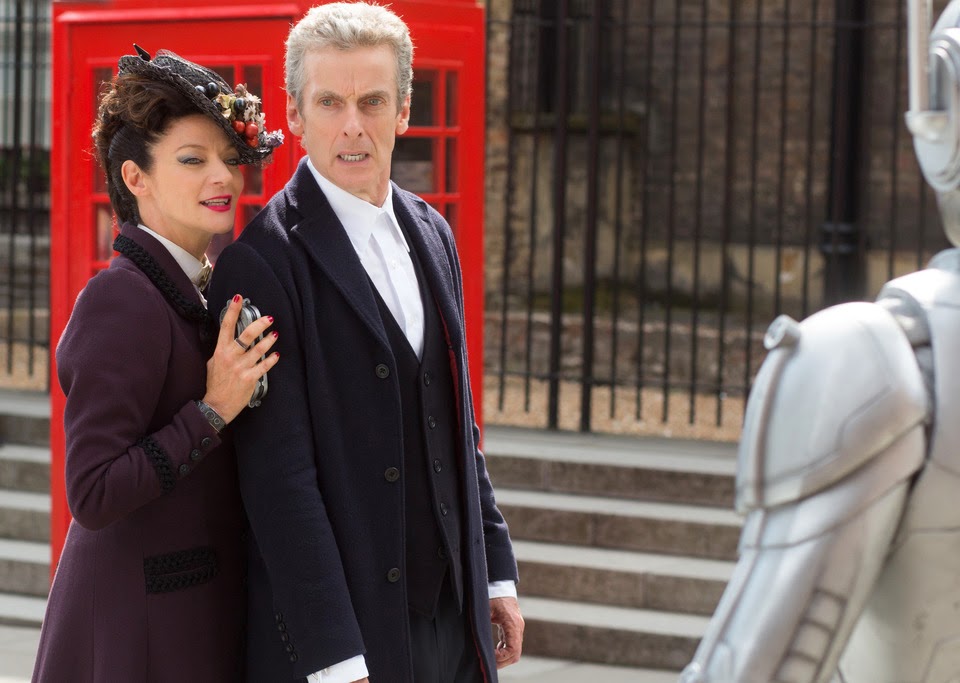 This episode does indeed dive into some very deep, dark water for a perceived "family" show: we see a truly frightening version of an afterlife, where the dead are still conscious and linked to their earthly bodies; our friend Clara is so obsessed with saving Danny that she betrays and threatens the Doctor for her own ends; and the Doctor finds he is, er, out of his depth as Missy reveals her plans and her identity. This is a very brave and unsettling story, pushing the boundaries of what the show can be about and showcasing some very adult themes of grief and bereavement, leading even the usually-supportive Radio Times to call it "crass and in bad taste."
There are a couple of developments in this story that I can't really believe  -  Why would the rationally-minded Doctor even believe in an afterlife, let alone try to pilot the Tardis there? And why would he help Clara after she had treated him so badly, grief or no grief? These questions weren't enough to spoil this tough, challenging story for me but they were a distraction. That said, there was plenty to enjoy here, all the same: the grim, funereal atmosphere; the emergence of the Cybermen from the dark water tanks; the impressive realisation of the Nethersphere; some trademark Moffatt humour sprinkled on top of the chilling implications of the plot.
And, as I type this, there are only a couple of hours to go until the finale airs on BBC1. Can't wait...

Four Out Of Five Sonic Screwdrivers ( or outraged critics ) ...that goes for all 3 episodes above :-)

Soundtrack: The Last Words Of The Great Explorer by TV Smith's Explorers