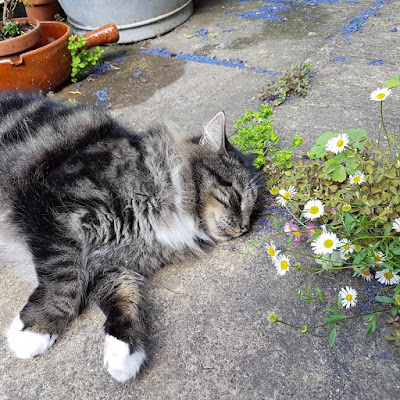 You know it makes sense... 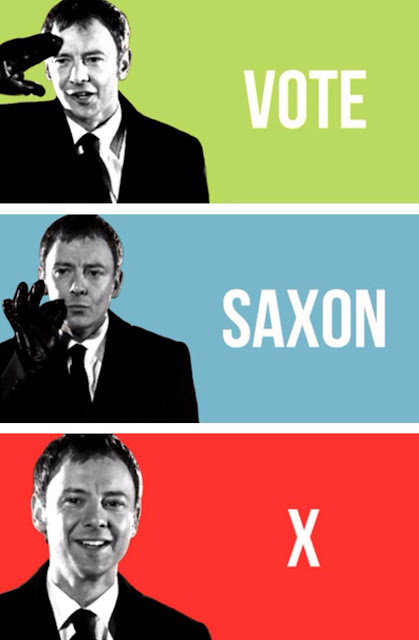 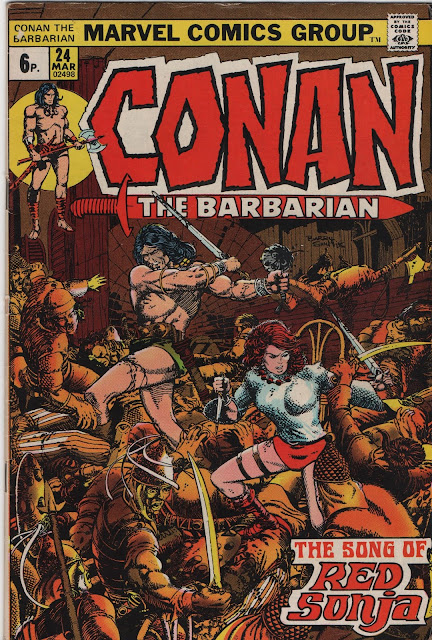 A couple of weekends ago ( trust this blog to always be up to the minute! ) we spent two days in sunny Portsmouth, home of the Mary Rose, the HMS Victory, the Spinnaker Tower, and the beautiful Portsmouth Guildhall which was playing host to hundreds of Wookiees, superheroes, gamers and Imperial storm troopers. Yes, you guessed it, this was the Portsmouth Comic Con and a very impressive con it was too, definitely the biggest one I've been to so far. The major draw for me was the appearance of those comic book legends, "Rascally" Roy Thomas and "Stainless" Steve Engelhart, two of the defining writers of the Silver and Bronze Ages. This was also an opportunity to catch up with the nearly-as-legendary Kids From Rec Road, but more of them later... 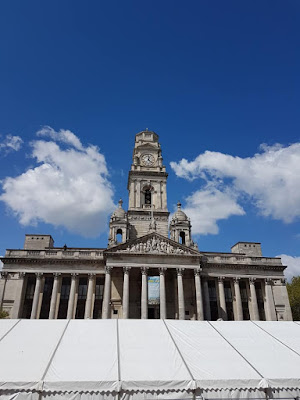 Whilst Sarah headed off to Gunwharf Quays for some retail therapy James and I| plunged into the maelstrom of the con. It was really quite bewildering with room after room and floor upon floor filled with toys, games, comics, artwork, cosplayers, families, people with very poor bodily hygiene, all squeezed into a labyrinthine building which was lovely but didn't seem to follow any logical pattern. After a little while getting our bearings I made a beeline ( whatever that is ) for "Sturdy" Steve Engelhart himself who was signing comics in the artist / writer area ( I'm sure it had a snappier title than that! ). For those who don't know, Steve was one of THE most prolific writers of the Bronze Age of comics who had celebrated runs on some of the most important mags of the day  -  The Avengers, The Defenders, Justice League Of America, Doctor Strange, Captain America, Detective Comics  -  whilst also creating or co-creating and writing such characters as Star-Lord and Shang-Chi, Master of Kung Fu. In later years he also wrote an excellent update of the Fantastic Four as well as working for Malibu, Valiant and Topps. Phew! My personal fave of all his comics work was the time he spent with the following master of the mystic arts... 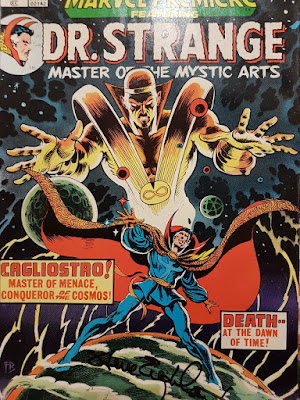 Naturally, this was the comic I'd brought from my own collection for Steve to sign. He was very gracious when I gushed about how much I'd loved this series as a young reader and how it had been ahead of its time in terms of philosophy and concepts. He told me briefly about the differing working relationships he'd had with artists Frank Brunner and Gene Colan on Doctor Strange  -  basically, Steve and Frank would brainstorm story ideas together over some jazz cigarettes and then Steve would shape those ideas into a story, whilst Gene was happy to work from a full script and didn't contribute to the plots. He also briefly touched on his time working with Marshall Rogers on Silver Surfer after I'd raved about that series too. Unfortunately our time was cut short after someone reminded Steve that he was due on a panel so I had to move on, but at least I'd spoken to one of my all-time favourite comics authors who had turned out to be a lovely bloke... and he'd signed my comic... 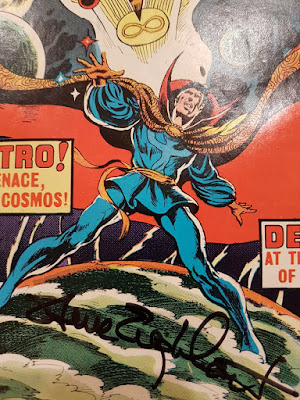 James and I legged it to the Guildhall's impressive council chambers for Steve's panel. Here we heard him repeat the stories he'd just told me about Doctor Strange and the Surfer, as well as further fascinating anecdotes about writing Captain America in the Watergate era, working with Marshall Rogers on Detective Comics, and his later creator-owned characters like Coyote and Scorpio Rose. Also at the panel were my ol' blog buddy Pete Doree of The Bronze Age Of Blogs and Kids From Rec Road fame, and Colin Brown, curator of the John M Burns Art Facebook page. We had a quick chat after the panel before going on separate quests. ( There's a wonderfully in depth post about this con on Pete's blog, which you can read here. He's remembered loads of stuff so I don't have to... )

James and I took a quick detour down to Gunwharf Quays to meet Sarah for some lunch and then it was back to the con. After nosing around the various stalls etc and briefly chatting with the guys from Knockabout Comics I queued up to meet the Rascally One himself... Mr. Roy "The Boy" Thomas... Yeah, here I am with THE Roy Thomas! As someone who's been reading Roy's comics for nearly as long as I've actually been able to read this was an exciting, and surreal, experience.As with my meetings with Steve Engelhart and "Dauntless" Don McGregor last year I found it incredibly hard to encapsulate decades' worth of time reading and enjoying the man's work in the short time I had with him. ( I didn't get off to a great start when I shook Roy's hand and he said "Wow! You've got a strong grip... and I've got arthritis." Oops! ) Anyway, he was perfectly charming and allowed me to burble on about what a fan I am  -  I'm sure he hears this stuff all the time. For a long time, of course, Roy was Stan Lee's right hand man at Marvel Comics, taking over the reigns himself as Editor in Chief when The Man moved on to Hollywood, and is a legendary figure in the industry. He had a stellar career writing mostly for Marvel and DC ( excelling at team books like the FF, X-Men, Avengers, Invaders, Justice Society Of America, Infinity Inc ) but one of his characters clearly stands head and overly-muscled shoulders above all the rest and was the obvious choice when I was thinking of getting a signature... 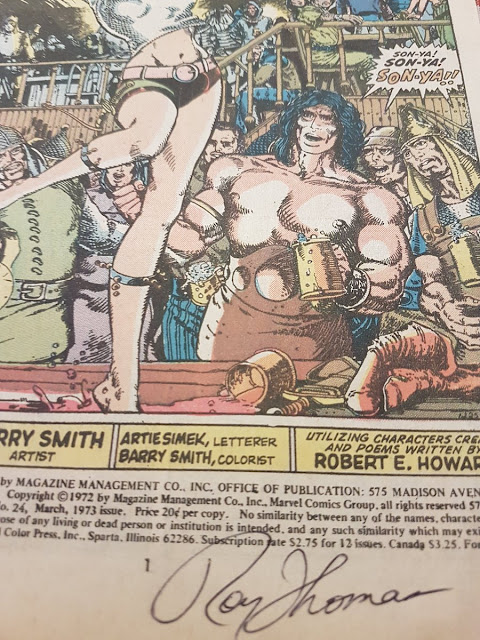 Okay, Conan The Barbarian wasn't actually created by Roy ( that honour of course goes to the legendary Robert E Howard ) but he's probably the most important character that Roy developed for Marvel and he's the character that is the most associated with the Rascally One. And it was always going to be this exact comic that I'd like to have signed, Conan The Barbarian #24 from March 1973, the last regular issue to feature the incomparable art of Barry Windsor-Smith. I've had this issue since ( I think ) the Christmas of 1978. Back in the Summer of that long-ago year ( imagine? 41 years! ) we'd had a family holiday in that there London and I'd had my mind blown by my very first visit to a comic shop, the legendary ( there's a lot of "legendary" in this post ) Dark They Were & Golden Eyed. For my first glimpse of the world of comics retail, before the advent of such faceless shops as Forbidden Planet, DTY&GE was a pretty cool place to start. A veritable Aladdin's cave of comics, posters, "head shop" products and ephemera, it was a wonderful place to visit and I easily blew my limited budget. And then I came across a copy of CTB #24. I persuaded my parents to buy it for me but they kept it as a Christmas present so I had to wait half a year before I could marvel at Roy and Barry's four-colour masterpiece, The Song Of Red Sonja. 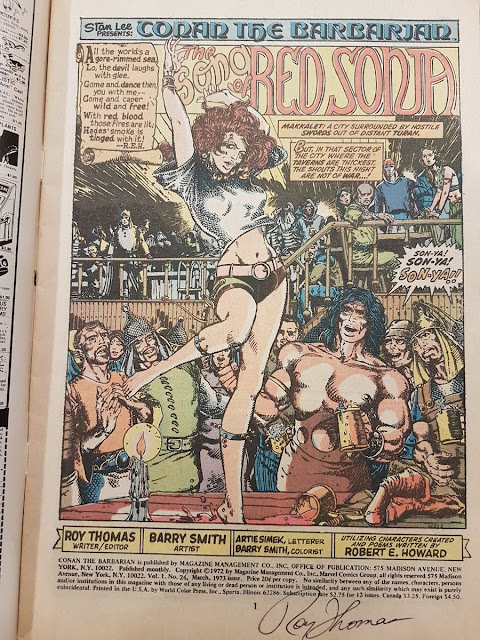 ( Yes, it was a pretty good Christmas morning! )
As with my chat with Steve Engelhart I was aware that that there was still a queue of people behind me waiting to see the great man so I didn't hang around too long. I had a quick word with Roy about The Hero Initiative, the charity he's involved with which raises funds for healthcare for veteran comics creators ( read about its good works here ), gave some money to the cause and then moved on. It had only been a short moment really but... I'd met Roy Thomas! Very, very happy.
( Incidentally, did you notice that Roy signed the above with a Biro not a marker pen? He was concerned that the thicker ink from a marker pen might show through on the next page. Pete and I were talking about this recently and he remarked on how respectful Steve and Roy were for the artwork on the covers they signed  -  they always tried not to cover important parts of the art. A small but very telling point. )

In between these encounters with awesome authors I did manage to rummage around the long-boxes for some bargains. Unfortunately these were in short supply  -  for all its good points, the Portsmouth Comic Con was severely lacking in yer actual comics, in fact it's probably the poorest one I've been to in terms of back issues. ( I mean proper back issues, not just year-old American comics at a slightly reduced price. ) And, of course, virtually no British comics at all. I only picked up two
( two! ) comics  -  an issue of  Warren Ellis & John Cassady's wonderful Planetary ( only one issue of the series to go to complete my collection ) and this Fourth World wonder from the King himself... 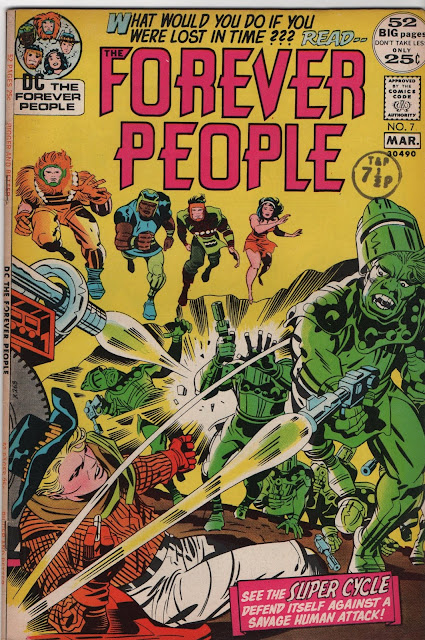 As the day began to wind down we headed to the local Wetherspoon's ( only the best pubs for us! ) to meet up with the Kids From Rec Road for a swift drink before we went our separate ways. Although the dreaded ( and pseudonymous ) Arnold Lipschitz didn't show, I still caught up with Pete ( blogger extraordinaire! ), the mega-talented and award-winning Sean Phillips, and met the third of the Kids  -  Dave H who actually lives in good ol' Gloucester just like your humble blogger. It's a small world but I wouldn't want to paint it etc. etc. Here are the Kids in full flow, with Dave explaining just why Marvel are better than DC ( probably ) 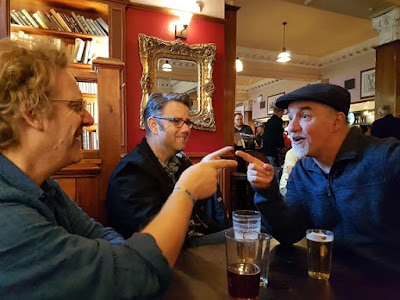 Not long after I took this photo, Sean headed back into the Guildhall for the Tripwire Awards where he won for Best Artist and Best Original Graphic Novel  -  very well deserved!
Whilst Sarah, James and I headed off as well  -  to our hotel just outside Portsmouth and an extremely average meal in a local restaurant. We then spent the next day in sunny Portsmouth, more to follow...