Bring the Toys back home 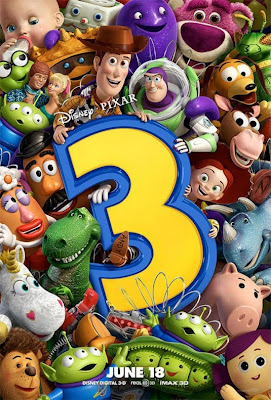 Or, Pixar's Pixels Produce Poignancy. And a lot of laughs.
I took James to see Toy Story 3 tonight at our local fleapit. He'd been a bit negative about the movie, saying it was for little kids and not for mature 10-year-olds like him, but I finally convinced him to go. And, if anything, Toy Story 3 seems more like an adult film, with its themes of ageing, loss and regret, and its lack of fart gags.
OK, there is one fart gag. 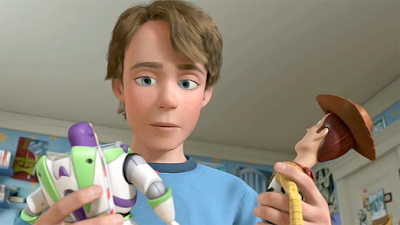 After a wonderful flashback sequence, mostly set in Andy's imagination, we see that Andy is now a teenager and is packing up his old room, ready for the move to college. Through a series of events Woody, Buzz and the gang find themselves dumped at a daycare centre, at the mercy of pre-school sociopaths, and under the cruel regime of not-as-nice-as-he-sounds Lots O' Huggin' Bear. The toys are convinced that Andy no longer wants or loves them, with only Woody still believing in their former owner.
The film becomes, on the surface anyway, a prison-break movie with some lovely riffs on all the classic escape-story tropes: complicated escape plans, useless guards, cliffhangers and double-crosses. As to be expected in a Pixar movie there are many, many laugh-out-loud moments: look out for Buzz's dance moves, Ken's indignation at being called a "girl's" toy, Mr. Potato Head's extreme makeover and one particularly manic monkey. Also to be expected from the Pixar wizards is the emotional core of the story: the desire to be loved, to be wanted, to return home, versus the urge to grow up, to move on, to change. There are a few moments where the old tear-ducts are exercised, especially the beautifully bittersweet ending which seems to bring the Toy Story, er, story to a suitable climax.
Andy: "Now Woody, he's been my pal for as long as I can remember. He's brave, like a cowboy should be. And kind, and smart. But the thing that makes Woody special, is he'll never give up on you... ever. He'll be there for you, no matter what."
It's been 15 years since we first journeyed "To Infinity And Beyond" and some new names joined the roster of all-time classic animated characters. Now the journey's over. Buzz, Woody..... it's been emotional.
Soundtrack: Music From Big Pink by The Band.
Posted by cerebus660 at 23:14

Pixar never ceases to amaze me. The Toy story franchise was destined for greatness from the beginning, and this third installment in the series lives up to its predecessors.

toy story is repsonsible for me yelling things like, to the kitchen...and beyond!! to the toilet machine...and beyond!!! it's now a running joke in our house.

@Jaccstev: Pixar always get the right balance between storytelling, character and spectacle, something other studios don't always manage.