Scott Pilgrim vs. the movie review 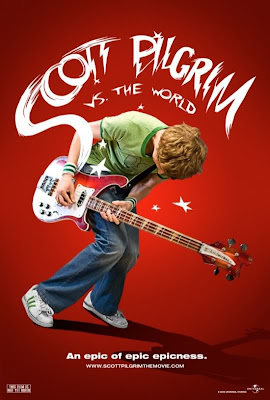 So there's this guy called Scott somebody and he plays, like, bass or whatever. He's totally dating a high-schooler, right? And then he meets this girl called Ramona and she's got pink hair and stuff. So he wants to go out with her, right? But, like, first he has to defeat her seven evil-exes who all wanna kick his ass. Which sucks. And then this English guy called Edgar or something wants to turn Scott's life into a movie or whatever. Which is cool..... 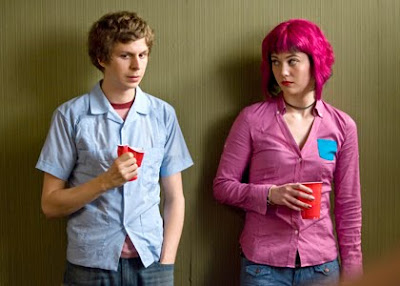 James and I saw Scott Pilgrim vs. The World last night in glamorous Stroud. Edgar Wright's adaptation of the Bryan Lee O'Malley graphic novel is a psychedelic, kinetic, hyper-stylised ball of energy. The lives and loves of Scott Pilgrim, his friends and enemies and their bands take place in a video-game world where anything seems possible. Even love. 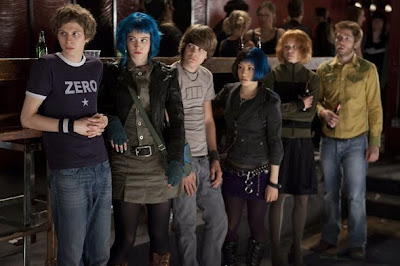 Scott is a ( seemingly ) hopeless slacker who, after a string of failed relationships, drifts into a love triangle with his virtually-platonic high-school girlfriend Knives Chau and new-girl-on-the-block, the tough, angsty Ramona Flowers. Unfortunately Romana comes with baggage: the League Of Evil Exes, seven former lovers, all determined that if they can't have her, neither can Scott. Our hero has to "man-up" and fight for the girl he loves and also his own self-respect.....
Director Edgar Wright's high concept is to film this story like a musical where the characters break into fantasy-battles to punctuate the plot, rather than break into song. Wright brings all his usual stylistic tricks and more into play: lightning-fast edits and scene transitions, comic-book style on-screen sound effects, characters as avatars in arcade games, a battle of the bands where monster riffs literally become monsters, petals fly across the screen as lovers kiss, an almost constant bombardment of images and sounds and references familiar to the anime/Playstation/iPod generation. 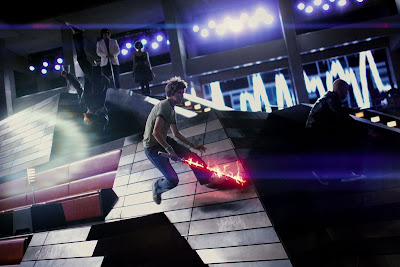 But amongst all this wild sensory-overload there's still room for some winning performances from the good-looking cast. Michael Cera stays just on the right side of annoying as aimless Scott and convincingly portrays the character's ( eventual ) decision to grow up; Mary Elizabeth Winstead is gorgeous and tough, with an underlying sadness, as Ramona; Keiran Culkin gets all the best lines as Scott's room-mate; and Ellen Wong, Anna Kendrick, Aubrey Plaza (!) and Alison Pill are all great fun as the other women in Scott's life. Some of the Evil Exes are short-changed when it comes to screen-time, but Chris Evans, as an egotistical movie-star, and Brandon Routh, as an even more egotistical rock-star, have a whale of a time sending themselves up and beating the hell out of Michael Cera - or at least his stunt doubles.
It's a wildly ambitious, visually imaginative and very funny film with eye-popping action and a great soundtrack. And a band called Sex Bob-Omb! What more could you want?
Soundtrack: Garbage Truck by Sex Bob-Omb.
Posted by cerebus660 at 23:26

Michael Cera was great in Arrested Development - from what you've said here, it sounds like I'll to Red Box this one when it becomes available. =)

I'd recommend seeing it on the big screen if you can. It's a fun movie and the visuals are eye-popping!