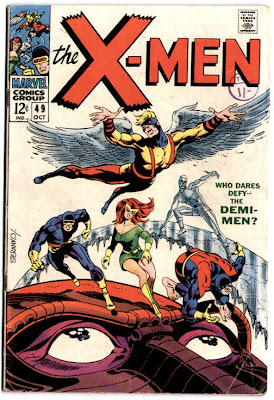 By the late 1960's Marvel's ailing X-Men title was on its last atomic-radiation-spawned legs ( hard to believe nowadays! ) and a certain Mr. Steranko was brought in to help prop it up. Unfortunately, the Jaunty One's short tenure on the mag ( two issues and three covers ) did little to save it from the axe - and neither did the fantastic Thomas/Adams run a few issues later. The X-Men later returned as a reprint comic, not to resurface with any new material until Giant Size X-Men 1, but that's another story.
( And a very well-worn one at that. )
Steranko's X-Men work ( see interior page below ) may not be as powerful as that on Nick Fury or his equally short-lived Captain America, but he certainly produced some dazzling covers in his best pop-art style..... 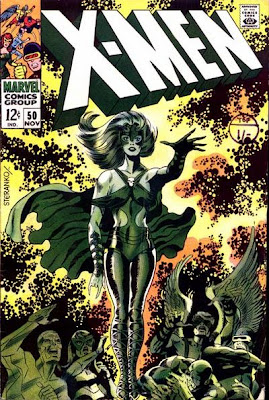 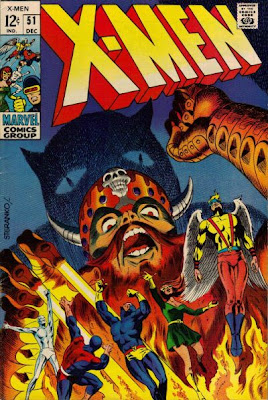 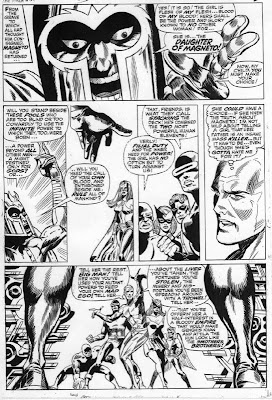 As part of a general tying-up of loose ends here at The Glass Walking-Stick, I'll be retiring the Steranko Saturdays soon. It's a feature that has become less and less regular and, going by the distinct lack of comments, not very popular either. ( Well, the lack of comments on the blog as a whole are disheartening anyway, but I've already moaned about that subject here. ) So, I'll probably do another couple of Steranko posts before the end of the year, and that will be it. If anyone wants to drop by, they might find a little mention for Marvel's number one eye-patch wearing superspy. Until then, just remember.....
Don't yield, back SHIELD!
Posted by cerebus660 at 20:32

cerebus, never despair. All because people don't have anything to say about a subject doesn't mean they don't want to read about it. I don't comment on the vast majority of posts that I read on blogs, not because I'm not interested (I wouldn't have read them if I wasn't) but because I usually have nothing to add to what's been said. I suspect it's the same with most people. Although I'm not a Steranko fan myself, there're probably people out there frothing at the mouth to read about him.

I hate to sound too whingey, but occasionally it feels like there's an inverse ratio between the amount of effort/thought I put into a post and the amount of response it gets. I'm not doing this just for the comments, but sometimes it's nice to realise I'm not just pissing in the wind, so to speak.

Also don't overlook Steranko's new logo design for the book, which has never been improved upon in all these years. Todd Klein writes more about it here.

I remember having seen the cover of X-Men #50 when it was new, but I don't remember reading it then -- that's how striking the cover design was. Much the same for the Neal Adams era of the book; I knew those comics by sight, but didn't actually read them until decades later.

I've been sorely remiss in not commenting more. A thousand apologies! As to the lack of popularity of Steranko...I think we might be seeing the start of a resurgence of interest online, especially with folks like Sean Witzke and Matt Seneca and Joe McCullough posting their critical analyses. Personally, I think of him as probably the finest *graphic designer* comics ever had...especially if you include page layout itself as a form of design rather than illustration. But he was uninterested in characters and story and comprehensibility, and that lack of interest showed too clearly some of the time. By comparison, you always knew Jack Kirby really cared about his characters and the story they were telling, and that made readers care about them too.

Of course you're right about the logo - I forgot to mention it :-) It is THE classic X-Men logo.

And, again, you're right about Steranko's graphic design sensibilities overshadowing his story-telling abilities. My favourite Steranko strip is the early Strange Tales Agent Of SHIELD, when he was following Kirby's lead and the story-telling was still strong. When the strip graduated to its own title I think Steranko had, if anything, too much freedom and the strip became too self-indulgent. But still beautiful to look at.

Couldn't agree more about Sean ( Supervillain ) Witzke's analysis of Steranko: it's spot-on in so many ways.

Thanks for commenting, Richard. No need to apologise - I always enjoy your erudite and heart-felt comments - I just need to lighten up about the amount of comments here, I think :-)