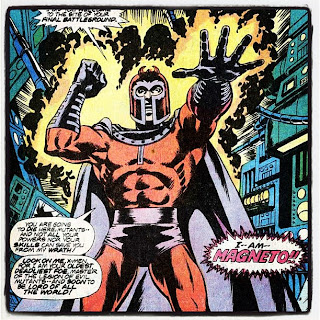 OK, I'm not actually Magneto but I have been in contact with some serious magnetism recently. 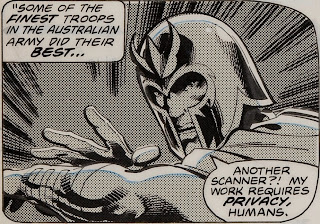 I went for my second MRI scan at Gloucester Hospital today, this time of my whole spine. ( The last time was just of my neck. ) Previous results had been clear and apparently this second scan was a standard procedure, which isn't expected to find anything nasty...
Fingers crossed... 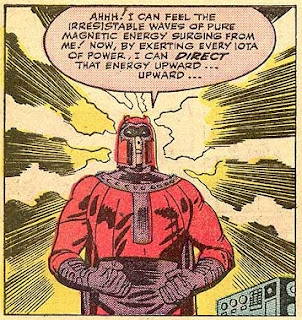 MRI, of course, stands for Magnetic Resonance Imaging and is a technique for building up a picture of the body's structure which goes further than X-rays in its examination of soft tissue. The link above gives the full, jargon-heavy explanation of how it all works but I like the version I was given at my first scan a couple of weeks back. Magnetic waves pass through you, turning every atom in your body by 45 degrees, then flipping them back again; the changes to the regular patterns this causes are measured and that builds up the picture. That may be an over-simplification but it sounds cool to me... 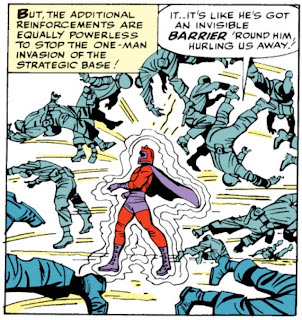 I spent about 35 minutes inside the scanner today. After removing all metal items ( and debit cards, which can be wiped by the magnetic field ) I laid down on the bed and was trundled into the machine on a conveyor belt, like an oversized oven-ready turkey going through a checkout. It's a strange experience, once inside. You're given earplugs before going in because the process is incredibly loud. The scanner gives off a few clicks to start with as it sounds like it's being aligned, then begins a barrage of sounds, alternately like a pneumatic drill or an automatic rifle. The sounds seemingly randomly slow down, speed up, change pitch... and then stop. After a long gap it all starts again. Over and over. Coupled with the claustrophobia of being in such a confined space the whole process is quite disorientating.
My way of dealing with it is to play a load of songs in my head while I lie there. I got through all of Born To Run during my first session, and most of London Calling today... which isn't easy with all those competing rhythms in your skull. Strangely enough, even with all this racket going on I still managed to drift into a kind of half-sleep, with scraps of dreams and images coming and going. But then, I'm like that: Sarah always says I could sleep on a washing-line. ( Whatever that means. )
I finally emerged, bleary-eyed, and must have seemed suspiciously out-of-it to the nurse :-) 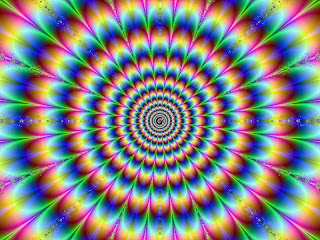 And it's not over yet. Tomorrow I'm going to the Oncology department at Cheltenham to discuss my forthcoming radio therapy and to have a CT Scan. ( Oh yeah, I also had a dodgy wisdom tooth taken out yesterday because radio therapy can have adverse effects on your teeth and jaw if there's any existing problem there. ) It's all go round these 'ere parts :-)
Posted by cerebus660 at 22:46

I have metal shot in my head so I suspect I can't get one of those without have them pulled out...which I wouldn't mind having done because they are annoying.

First time I had an MRI scan, I panicked because of the confined space and had to be taken out of it until I could psyche myself up. This was unusual for me, because I'd never had a problem with confined spaces before. The nurse said that it wasn't unusual, and that electricians used to crawling under floorboards when rewiring houses, etc., had also reacted in the same way when having an MRI. Strange that, eh?

That would definitely cause a problem for the MRI. They go through a whole checklist of questions: Do you have any metal plates? Dentures? Pacemaker? Are you a T1000 Terminator from the future here to ensure the final victory of Skynet over the human race?

They asked me how good I was with small, confined spaces. I said I wasn't sure because I don't tend to crawl into said small spaces :-)

I suppose the difference between an electrician's usual job and being inside an MRI is the fact that you're immobile for the duration and surrounded by all that noise. It is, indeed, a strange experience. I've also literally just got back from the hospital after having my CT scan. I feel another post coming on...

Well, if the MRI doesn't manage to activate any latent mutant superpowers, I hope that it at least gives you a clean bill of health.

Thanks Mike. Either would be good... but that latter is obviously the favourite option...

Just had the call from Gloucester Hospital: apart from wear and tear ( of which there's probably quite a bit ) my spine is doin' fine...
Phew!