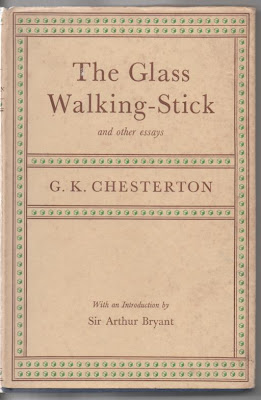 Where it all began.....
So I had to think up a name for my blog. I had no real plan of what I was even going to write about. I didn't want to cover just one subject ( like knitting or opera or football ) so the title would have to be non-specific but potentially interesting.....
I just gazed around the room and saw my 1955 edition of assorted GK Chesterton writings and thought "that'll do!" and then I wrote:
"OK, first ever blog. Breathe deeply, focus etc. So, why The Glass Walking-Stick? ( Why the long face? ) I got the title from a collection of essays by G.K. Chesterton, that sadly-neglected ex-titan of English literature. A crusty old bugger who could, and did, write wittily and deeply on any subject under the sun, G.K. is responsible for one of my favourite novels, The Man Who Was Thursday. He rocks! Well, he did: he died in 1936.

"In one of these essays, Chesterton bashes the rich for their snobbish attitudes and defends the poor: "The cultivated people go in for what is beautiful; but the un-cultivated for what is interesting.....One man had a walking-stick made of glass and filled with sweets. If there were children in the house, the preservation of that glass stick has something of the insane sublimity of a religion." It wouldn't last long in our house anyway.

"Glass walking-stick equals something interesting but bonkers? pointless? fun? It could be a metaphor for blogging or I could be talking out of my a***e. ( That's a** if you're American. )

"Anyway, the plan is to witter on about any old random rubbish, whenever I can get my act together. As you can see above."
...but I still haven't written anything about knitting. Or opera. Or football.
( Probably won't start now, to be honest. )
Posted by cerebus660 at 22:35

The Man Who Was Thursday is one of my favourites. My daughter and I read it together and had a blast with it. And, of course, the Father Brown mysteries.

As you can probably tell, Mike, I'm a big fan of GKC. Did you know he made a guest appearance in Neil Gaiman's Sandman as a character called Fiddler's Green? I wonder what the real Gilbert would have thought of that...

Happy 500! By a strange coincidence, I read The Man Who Was Thursday while on holiday. I have to say that I wasn't overly wowed by it, sadly...

Congrats on the milestone. I am approaching a big one myself and it's fun to look back from day one and see all your effort.

@Nick
Cheers, mate! I've always loved The Man Who..'s dreamlike atmosphere and eccentric characters. My only problem with it is the ending which is rich with religious metaphors and a bit over my head TBH...

@Cal
Thanks O Cool One! I know I'll never match your ( almost superhuman ) amount of posts... but I keep trying
:-)

I would like to congratulate you also upon reaching such a milestone. We bloggers perhaps measure not our word and thought, we may perhaps not measure by comment or similar merit. But the number (quality not over quantity for once) of posts is a rather noteworthy occasion.
Hey, maybe you can blog about it - oh you did!
Well done Simon - knitting and opera and football can all fall by the wayside but more about that amazing Dr Who if you please. I can't get enough of him on this side of the world.

@Momo
Thanks for the kind words. It's definitely been a case of ( hopefully ) quality over quantity here lately. I really need to get back to more frequent blogging.
Don't apologise for your English: there are uncounted masses of people on the net for whom English is their first language but can't write as well as you do...

@Steve
Cheers, matey! Thanks, as always, for stopping by...

So *that's* where you got the blog name. I never knew...and have never heard of any Chesterton besides Ian. =) Congrats!

Thanks, Mickey!
Ian Chesterton may not have read any of his namesake's work, but I bet Barbara Wright did...