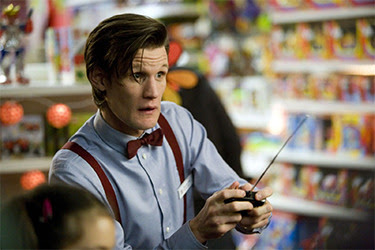 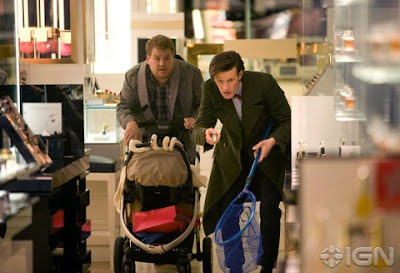 Mini review. Comedy episode. Low budget. Save the pennies for season finale. The Doctor's visiting Craig ( you know... tubby guy from The Lodger ) and his new baby Alfie aka Stormageddon, Dark Lord Of All. Craig feels like a useless dad. We all get that now and then...
Department store. Very obviously not just Debenham's with a new sign put up. Cybermen in the changing-rooms, the Doctor working the toy department. Robot dogs and silver rats. More scenes in department store. And more. Doctor and Craig searching for alien spaceship. And plot.
Craig discovers his paternal mojo and kills rubbish Cybermen with love. ( No, not with a cyber-STD... ) 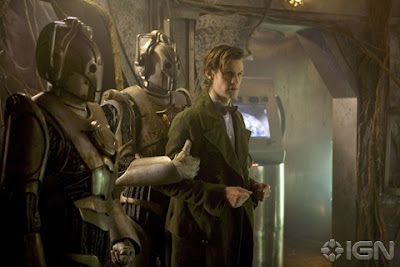 Closing Time is ( worryingly ) another weak episode in the season that's already given us That Pirate Story. The once-mighty Cybermen are wasted yet again, the plot is virtually non-existent, and there are only blink-and-you'll-miss-'em appearances from Karen Gillan, Arthur Darvill and Daisy Haggard. The relationship between the Doctor and Craig is still funny and charming, but isn't enough to sustain another 45 minutes. Luckily, Matt Smith is on top form: just look at the way he says "...what?" when "silver rats" are mentioned. Priceless.
And then, right at the end, in a chilling scene between River, Eyepatch Lady and the Silence, we remember that this Doctor's story will end very soon. Or will it?
2 1/2 out of 5 Bow Ties.
Oh, and Craig? On the subject of not knowing when to change a baby's nappy, I'll just say "sniff test" :-)
Posted by cerebus660 at 22:55

I really do wish the Cybermen had been allowed to cyberise Craig. I've nothing against him but it would've been much stronger dramatically to have the Doctor fail at a time like that.

Although I hate to say it, almost *anything* would have been stronger dramatically...

I've watched the episode a couple of times now and it still remains just OK - really only saved by Matt Smith's performance, in my opinion. Shame really, because I'm usually a big fan of Gareth Roberts' stories.

Yeah, there were lots of things I didn't like - love kills Cybermen, a unexpectedly cheap looking Cybermat and James Corden (just not a fan) - but it still managed to be passably enjoyable. It just didn't really feel like a penultimate episode for such an ongoing storyline.

I did enjoy the ominous final scene with River, linking to the last episode, even though it felt tacked on...

Hi, I just managed to see this episode here and I quite liked the loving partner play. Yes the sci-fi plot was weak and luckily the cybermen were badly understrength.
I have one worry on continuity, in episode one of this series, the Doctor who was going to apparently be killed said he was over 1100 years old and to confirm it (in an unsure way) he answered River's questions on her so called spoilers.

My guess - the Doctor that gets killed is of the flesh. He tricks Miss Eye patch lady with her own little ploy!

Anyone know if this next show is the last episode or is it over 2 or 3 weeks like other series ends were?

At the start of the latest episode the Doctor says he has been on his "farewell tour" for 200 years, so I assume he must now be around 1100 years old by now, and ready for Lake Silencio :-(

This Saturday's episode is the last of the series ( until the Christmas special )and it looks like they're going to pack enough action for the now-traditional two-parter into one episode :-)