Doctor Who: The Curse Of The Black Spot ( review with spoilers ) 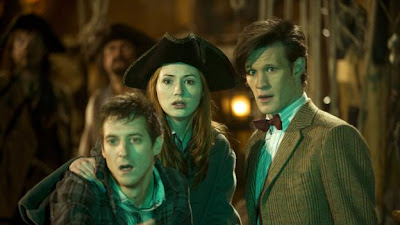 "Yo ho ho! .....or does nobody actually say that?"
After the twists, turns and mysteries of the last two weeks, the show kicks back with what reviewers of Doctor Who are contractually obliged to call a "romp". The Doctor and the Ponds answer a distress signal and find themselves on a becalmed pirate ship, being menaced by a "stroppy homicidal mermaid", dealing with an unfriendly crew and generally swashing their buckles. Or buckling their swashes... I'm not too good on these nautical terms. 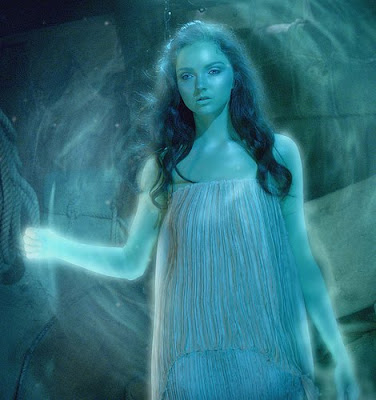 Amy gets to show off her surprisingly impressive sword-fighting skills, much salty dialogue of the "scurvy dog" and "this is mutiny!" ilk is thrown about, and just about every pirate cliche is run up the yardarm. Sadly, it seems much more fun for the cast than the viewer.
The sense of claustrophobia and dread the story calls for is mostly absent and the "funny" lines aren't that funny. Lily Cole is striking as the Siren, but has very little to do and no dialogue, while the reality of her assumed menace turns out to be yet another "automated spaceship programme that doesn't know when to stop" ( see The Empty Child, The Girl In The Fireplace and The Lodger ) which is a Nu-Who trope that's definitely outstayed its welcome. Oh, and Rory nearly dies. Again. But the story isn't all that bad. There are some lovely scenes between Matt Smith and Hugh Bonneville, as pirate captain Avery, Karen Gillan looks cute in her tricorn hat, and Arthur Darvill again shows off his comic abilities as well as providing some real pathos in the later scenes.
This story is obviously intended to provide a breather between the intense first story and Neil Gaiman's much-awaited episode next week. As such it could only pale in comparison, but Who's
( relative ) failures are more entertaining than many shows' successes, so I'll rate this episode:
3 out of 5 Bow Ties. Or pirate hats.
Posted by cerebus660 at 00:01

Arrr, I be docking this episode several hundred points for the utterly unforgivable depiction of the Doctor failing to help a boy dying of typhoid fever when it can be cured in any hospital in Amy and Rory's home era. The Doctor is willing to put a pirate crew in charge of an alien spaceship but not give them some Ciprofloxacin, easily distributed in pill form?

Actually, the Doctor was way too passive and incompetent all around this time. A real disappointment with such a good premise.

I don't have any great problem with the Doctor not saving Toby. I just put that down to him not being allowed to change history (except for all the occasions when he does change history) but the sight of him just stood there like a lemon while Amy made her less than determined attempt to save Rory really did grate. He's supposed to be a doctor - of everything. She's a kissogram, so which of them gets to do the CPR?

I have to agree that this episode was a bit of a flat tire after the intensity of the first two.

I don't think either Amy or the Doctor saved Rory. They just gave up and he came to on his own. Is something else going on here? From the uncertain look on the Doctor's face I'd say yes.

Thanks for the comments, guys!

I was quite looking forward to seeing Doctor Who And The Pirates ( which would have been my alternative title in a Target Books kind of way ) but it's a shame the episode turned out so weak. Another couple of drafts of the script might have made all the difference...

And I didn't like the Doctor's passivity, either. It reminded me too much of the times when Chris Eccleston's Doctor would be in danger but admit to having no plan and more or less give up, only to be saved by a human :-(

I've only recently found your blog and I'm enjoying the reviews (& the mention of Target bks!). I liked the pirate half. It did remind me a bit of tv's She Creature from 2001 (people on a ship with a mermaid keep dying). I hate the alien ship and the CPR scene and that the siren doesn't get any lines. Several times the Doctor seemed to be standing round with nothing to do. No one has mentioned the weird moment when that woman with the eye patch was back, or the fact that Amy is and isn't pregnant. I just hope that the answer is worth waiting for. And that it doesn't make me want to throw things.

I'm dreading the moment when they reveal it's all been a dream.

Good to hear from you, phantom_tiger! Hope you can find something here of interest - I always welcome comments, suggestions, flattery, insults etc. Well, maybe not insults ;-)

Steve, surely Moffat wouldn't, er, dream of doing that to us?