Doctor Who: The Almost People ( review with spoilers ) 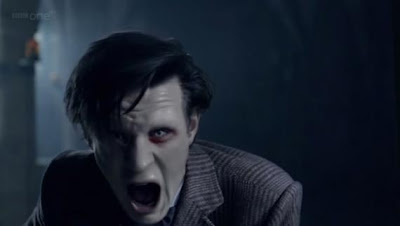 "I've reversed the Jelly Baby of the neutron flow....."
Part Two of this story brings double trouble for the Gangers as the Doctor now has his own duplicate and, unlike most previous multiple-Doctor meetings, they get on famously. No snide comments about his effectiveness being halved this time: the two Docs have a ball, finishing off each other's sentences, complimenting themselves on their cool taste in bow ties etc. And we also get a lovely little nod to past Doctors:
"The Flesh is struggling to cope with our previous regenerations....."
As the Ganger Doc tries to stabilise his Flesh-y form he blurts out lines from past incarnations and presents us with the startling sound of Tom Baker's voice coming out of Matt Smith's mouth! And also a mention of Cybermats. Foreshadowing future stories here...? 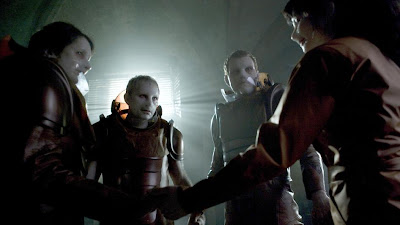 Back at the plot, the Gangers are starting to have second thoughts about their "war" with the humans, and everyone is desperate to escape the island as the threat of acid, poison gas and a final, fatal explosion escalates. The Jimmy Ganger is manipulated by the Doctor into speaking to "his" son via holo-phone, further strengthening his empathy with humans. Jennifer, however, pushes on with her campaign, tricking a more-than-usually gullible Rory and manifesting more icky powers such as growing eyes on the monastery walls to act as CCTV.
Amongst the running around in corridors, a confused Amy confronts the Ganger Doctor and reveals to him that she's possibly seen his death in the future. Of course, the two Docs have switched places and now the "real" Doctor knows his Terrible Fate. Before this can be explored any further Jennifer turns into a stretchy, CGI monstrosity, the Ganger versions of Cleaves and the Doctor sacrifice themselves to defeat her, and the survivors are whisked away in the Tardis. "Jimmy" is reunited with his son, whilst Cleaves and Dicken ( the one acid factory employee who was "almost" totally inconsequential ) are dropped off at the HQ of their evil corporate masters in the ( probably vain ) hopes of alerting the world to the horrors of Ganger slavery. But the real climax of the story is ( like in the Tenth Doctor's Utopia ) a cliffhanger that points the way to the next story and turns out to be far more important than the episode preceding it: 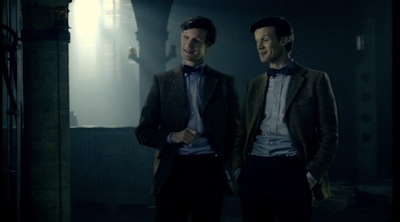 "I said 'breathe', Pond. Remember? Well, breathe....."
In the Tardis Amy is (SPOILERS! ) having contractions and about to give birth. And she looks so thin! In the big revelation of this first half of the series we learn that the Amy who's been running around and having adventures for possibly the last six episodes was in fact a ( SPOILERS! ) Ganger and the Doctor's trip to the monastery wasn't random but was a fact-finding mission. Except "stuff" and "shenanigans" got in the way.....
"We're coming for you, I swear it. Whatever happens, however hard, however far we'll find you."
"I'm right here....."
"No you're not. You haven't been here for a long, long time."
The Doctor promptly melts the Amy Ganger, severing its connection to the real Amy who, we discover, is in the clutches of Eye-Patch Woman ( scariest midwife ever? ) and is "ready to pop".....
Phew! It's a traumatic, shocking cliffhanger which prompts re-evaluation of the entire series so far. Has Amy been missing since the end of A Christmas Carol ? ( As hinted at by exec. producer Beth Willis on this week's DW Confidential ) Or was she switched with her Ganger by the Silence? And what of the little girl, last seen "regenerating" in a New York back alley? Is she Amy's child or something else? The real problem with this turn of events is that, for all the Doctor's talk of doing things the humane way, he has just effectively killed a Ganger. And, as my learned colleague Mr. Steve W says here, this undermines all the Doctor has learned about the Gangers being "real" people. Anyway, a harder edge is sure to come in handy for the Doctor soon, even if it's morally suspect
( shades of the Sixth Doctor! ), as he races to find Amy, and a good man goes to war.....
Four Out Of Five Bow Ties
Posted by cerebus660 at 00:52

I was assuming that Amy was swapped in the three month gap between "The Impossible Astronaut" and "Day of the Moon" but it's interesting to hear she might have been missing for longer.

No problem, Steve! You so completely summed up my thoughts on the Doctor's morally-grey actions that I had to give you a mention. Plus it saved me from writing all that stuff too :-)

I don't know if that was the official line on Amy's abduction - just something the lovely Beth Willis mentioned in passing on Confidential. Maybe we'll find out next Saturday...

Very disappointed BBCA did not air the new episode this week. =( Onward and upward to next week, then.

Plus, my mother talked through the entire rebroadcast of the previous week's show.

Hi Mickey! Hopefully you'll get to see this episode eventually :-)
And I hope you didn't peek past my
( SPOILERS! ) warnings - I haven't worried too much about spoilers for American Followers recently, knowing that BBC America were broadcasting the show on the same day, give or take. And now this week they've delayed it...

I'm no the brightest when it comes to Science fiction or super hero's and comic books but i do like a good story and since my friend from the UK introduced me to the Doctor - I have enjoyed following these story lines each year.

I've just watched the rebel flesh and it surprised me that Amy was a 'ganger' at the end.
I have lots of questions about what I've seen and heard in the series so far but I think I can explain this conundrum regarding the Doctor's apparent blatant disregard of his usual ethics and atomizing the fake Amy.

In the first episode I believe the 'programmable flesh' served as a vehicle for a Human to work in dangerous areas.
It was the solar tsunami delivering massive gamma particles that somehow made the programmable flesh sentient. It allowed the 'flesh' (programmable matter)to copy the imprint of the life force of the controllers.
These became lifeforms in their own right by accident.

Amy's Ganger was never (as far as we know) subject to this massive radiation burst and so someone was still driving her flesh duplicate.

I think the silence made it and controlled it - even though it had a real link through Amy's consciousness - hence dreams for the real one and knowledge for the duplicate. So when the Doctor atomized the fake Amy he was simply dissolving a non life form - an Amy vehicle.

Did that make sense?

That makes a lot of sense! Thanks for your insightful comment, Momo. I know I can count on you to get to the heart of the matter, unlike my vague waffling...

This is the episode which drove me crazy. It wasn't Amy's ganger that upset me, I didn't even really think of it as real. After the lectures about gangers being the same as people, we end up with no duplicates left, only individuals. There is essentially no conflict if there is only one of each person (you don't have to face up to the tricky bits like a son with two identical fathers or two people with the same life). Plus the two gangers who hold off the monster - why do they have to do it if everyone is equal? Horrible plot fraud. I did like the line "you're twice the man I thought you were". Pretty much expected that the Doctors had switched places. Find some satisfaction that after Tennant got so much flak for being a dark, angsty Doctor, Smith is now going the same direction.

I think the production team are keeping the balance right between the Doctor's "light" and "dark" sides. Obviously Tennant's Doc got darker as he came nearer to regeneration and the stakes got higher. I think most people expected a lightening of the character, if only temporarily...