Doctor Who: The God Complex ( review with spoilers ) 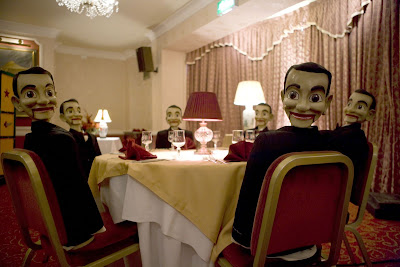 "There's a room here for everyone, Doctor... even you."

This week the Tardis Trio find themselves checked into the hotel from hell, where your standard accommodation problems like dirty bed linen and poor plumbing are replaced by rooms filled with your deepest fears, a shifting labyrinth of landings and a horned beast thumping along the corridors. Fawlty Towers this ain't... 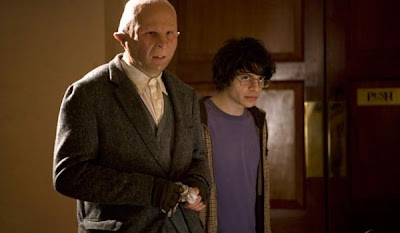 The Doctor and the Ponds find themselves among a disparate group of reluctant guests, like David Walliams' cowardly Gibbis and stuttering blogger Howie, all being forced to face their own, personal demons, before giving up their faith and their lives to the lord of the labyrinth. The nightmares in the hotel rooms all seem small-scale ( a sad clown, chattering ventriloquist dummies, angry PE teacher ) but they are all geared to pushing the guests over the edge. As the Minotaur claims more and more victims, the Doctor and Amy have to both face their own fears and come to a turning point in their relationship... 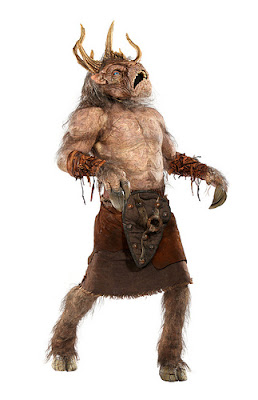 While not a classic, this episode is a lot of creepy fun from professional scarer, Toby Whithouse. The seedy, 1980s hotel is a wonderfully garish backdrop to the nightmares ( Weeping Angels, disappointed dads, brutish apes, Cloister Bells... ) and the Minotaur is a triumph of costume design and execution. The ruminations on fear and faith give this story a depth and poignancy when it could have been just a runaround; and there's a standout performance by Amara Karan as another doomed potential companion. David Walliams, however, is mostly wasted as mole-like, cowardly alien comic relief Gibbis and only really shines in one scene when being upbraided by the Doctor. Maybe he should stick to swimming through sewage :-)
The last scenes of the Doctor saying goodbye to Amy and Rory are quite touching... even though we all know they'll be back very soon. 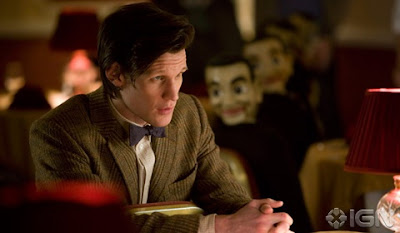 I'm not on the horns of a dilemma about this one:
4 Out Of 5 Bow Ties

Finally, I'd just like to say how satisfying it is for old Fourth Doctor fans like myself to hear that this story's excellent monster is related to corny, pantomime villains, the Nimon - who lived in a Power ( not God ) Complex and were endearingly crap, back in the days of wobbly sets and even wobblier special effects.

Easily my favourite episode so far this series.

I liked it. Much creepier than Night Terrors but not as heartbreaking as The Girl Who Waited (although the lonely, crying-in-the-inside clown with the red balloon came close -- no one left to terrify, but no one around to turn him off). I liked the Gibbis character. He was more than just comic relief -- his cowardice did have a sly, sinister edge which the Doctor pointed out.

The only question I have is: What did the Doctor see in his room?

The young man with the glasses puts me very strongly in mind of a Harry Potter who's been on one hell of a bender.

I haven't seen any of the mid-season series, so I look forward to your posts. And the screenshots! They are pretty damn creepy!

Thanks for commenting, guys! Seems that episode was a success!