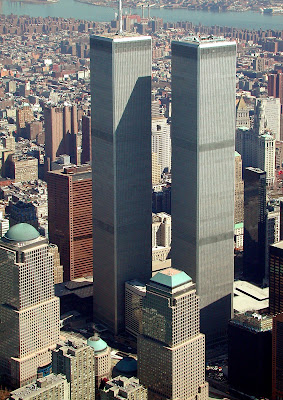 Of course the net is awash today with people remembering the awful events of 9/11.
It's strange to think that a whole decade has passed since that terrible day. In some ways it seems like a lifetime ago, in some ways it seems like only yesterday.
Many of us will think back to that September morning and remember where we were, what we were doing, that moment of shock, that dreadful, sinking feeling of realisation.
I was at work at the time, blissfully unaware, working in an office with no radio and no internet connection. A colleague rushed in and said "Have you heard what's happening in New York?" She told me a plane had hit one of the Twin Towers. "What, a light aircraft?" I replied. Of course, it was worse than that, worse than just some random, terrible accident. When the second plane hit we knew, the whole world knew, that this event was bigger, more loathsome, more despicably evil than we'd imagined. The story unfolded throughout the day and, when I was told that the Towers were collapsing, my mind just couldn't grasp the fact. How could they fall? How could this happen? I rang Sarah at home and we talked about how unbelievable, how shocking this news was - she said "You haven't seen the pictures yet..."
Of course, when I got home I watched the news, we all did. Those bright, hyper-real, shocking images repeated over and over, burning themselves into our minds. We grieved for the people of New York, people we never had known and now never could; just the feeling of empathy for fellow human beings caught up in the unbelievable, the unendurable. But the people of New York - and the world - had to believe, had to endure, had to rise up above this darkness.....
I'm sorry if I've rambled here but I just wanted to say that we remember, we will always remember, and love and prayers and hope for the future are wished for all those who lost someone on that terrible day, ten years ago.
Peace...
Posted by cerebus660 at 12:10