"Blinded by the light, cut loose like a deuce, another runner in the night..."


40 years ago today Bruce Springsteen released his first album  -  Greetings From Asbury Park, NJ  -  on Columbia Records. It's a strange hybrid of the then-in-vogue singer-songwriter genre ( the record company were promoting Bruce as yet another "new Dylan" ) and Springsteen's bar-band roots. There are some great songs on there, struggling to burst free from the indifferent production and the too-polite arrangements. It's also the wordiest set of Springsteen songs, justifying the "Dylanesque" hype. Check out this verse from Blinded By The Light...

Madman drummers, bummers and Indians in the Summer with a teenage diplomat
In the dumps with the mumps as the adolescent pumps his way into his hat
With a boulder on my shoulder, feeling kinda older, I tripped the merry-go-round
With this very unpleasant sneezing and wheezing the calliope crashed to the ground

When I saw Bruce play the Millennium Stadium in Cardiff back in 2008 he performed this song ( the only time I've heard him play a track from this album ) with the aid of an autocue :-) 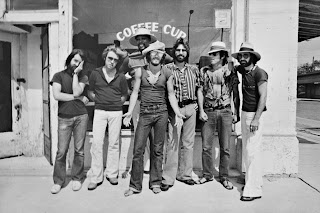 Springsteen once said Greetings... "was the only album where I wrote the lyrics first, setting them to music later. I'd write the verses, then pick up the guitar or sit at the piano and follow the inner rhythm of the words. Most of the songs were twisted autobiographies... ( they ) found their seed in people, places, hang-outs and incidents I'd seen and things I'd lived. I wrote impressionistically and changed names to protect the guilty. I worked to find something that was identifiably mine."

He pared down his writing style after this ( too much, for some people's taste ) but, personally, I do like to revisit his more poetic, if somewhat pretentious, early style now and again. I've ordered a ticket for his gig at Coventry's Ricoh Arena in the summer, having missed his tour last year, and it would be cool to hear some of this old stuff played by the modern, much-changed E Street Band. Here's hoping...


...but I doubt these other two American icons will turn up as well...

Soundtrack: guess which album?
Posted by cerebus660 at 22:43

I've always thought "Hey man, did you see that? His body hit the street with such a beautiful thud" (Lost In The Flood)one of the best lines ever and this album was the first I heard, although he was up to Born To Run by that time. One of those records that takes you straight back to when and where you first heard it.

Hi Edward! As I've said on here before in one of my previous witterings, the first time I heard this album I didn't get it at all. Bruce's voice sounded too slow and drawling... and I really didn't like Mary Queen Of Arkansas. ( Thinking about it now, I probably gave up on the album at that point. ) It was only after buying BTR that I went back to Bruce's other stuff and found I actually liked it. I still wonder what it would have sounded like if he'd recorded it with the later, stadium-rockin', incarnation of the E Street Band...