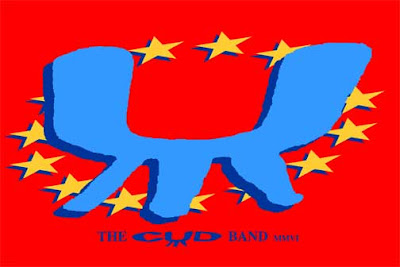 Some bands just don't get the breaks. Cud were minor players in the so-called "baggy" scene of the late '80s / early '90s, when the Roses and the Mondays were monkey-dancing to the top. A Leeds-based band who'd caught John Peel's attention, they played an idiosyncratic, funky indie-rock with some wilfully odd lyrics. They had barely scraped into the charts with a handful of albums and singles before record company antagonism, broken bones and that old chestnut, "musical differences", put paid to their career. 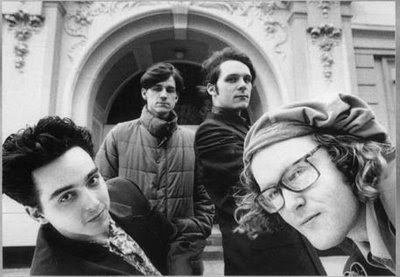 And, as the above pic shows, being one of the least sexy bands ever couldn't have helped.
Which is a shame, 'cos they were a fine live band who knew how to connect with an audience and get people up on their feet to strut their funky stuff. They had a charismatic frontman in Carl Puttnam who came across as the bastard lovechild of Jim Morrison and Meatloaf, and they laid down some infectious grooves amongst all the mad lyrics about prawns, boots and Robinson Crusoe.
Sarah and I saw them a couple of times in 1990 at the good ol' Gloucester Guildhall. The first time we'd just heard some bad news about a family friend being killed in a motorbike accident, so we weren't in the best frame of mind for a gig, but thought we'd go to take our minds off things. Cud were the living definition of music therapy, their good-time vibes and irreverence lifting our spirits. Wherever you are guys, thanks.....
Soundtrack: Strange Kind Of Love by Cud
Posted by cerebus660 at 23:49