A year on the blog 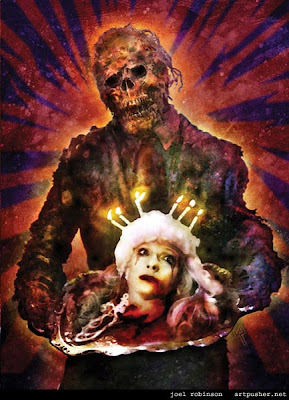 Ah, here's my cake.....
So, I've been doing this blogging thing for exactly one year now. Doesn't time fly? When I started this I didn't know what to expect from it or what I was doing ( things haven't changed much! ) but it seemed a fun idea. Here are a few memories of Year One:
Taking a while to figure out that you can put titles on these things.
Upsetting a fellow blogger by calling a certain comic creator's dialogue "atrocious".
Taking a while to figure out how to change layouts, gadgets etc.
Being shortlisted for a blogger job for a famous sf magazine's website.
And not getting it.
Meeting new virtual friends in New York, Barcelona, Australia and some desolate, icy tundra...
Taking a while to figure out the difference between the words "blog" and "post".
I think I've got that straight now.
Sitting up until the early hours, bleary-eyed, swigging coffee, and still not posting anything.
Talking comics, films, music etc. with other enthusiasts: I love it!
Mentioning The Glass Walking-Stick to a friend who looked at me as if I'd just tracked dogs**t into his kitchen.
Blogging from work when my home PC was ill, feeling like a spy.
Er, I mean I was feeling like a spy, not the PC...
Following and being Followed, like a kind of mutual stalking, but in a good way.
( Seriously, a big thanx to all my Followers! You make it all worthwhile. )
Anyway, that's enough gibberish for now - the real world beckons!
( But not for long... )
Posted by cerebus660 at 20:55

Email ThisBlogThis!Share to TwitterShare to FacebookShare to Pinterest
Labels: random

They do say that, don't they?

either ways sorry I missed this milestone bro. congrats!