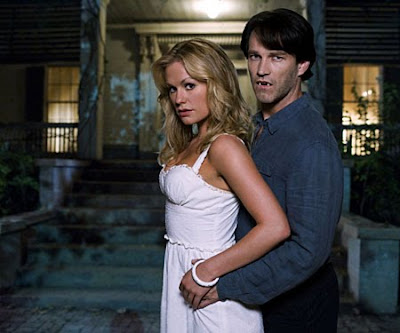 In the endless televisual abyss of talent shows, soaps, games shows and chat shows the occasional ray of light shines through. OK, it's a dark sort of light (?), but bear with me.....
Channel 4's ( well, HBO's ) True Blood series one has reached episode five, Sparks Fly Out. All the usual sex, violence, bad language and drug-taking are present and correct, and the main character's relationships continue to twist and turn like a twisty-turny thing. With fangs. Sarah usually complains that the show is slow-moving but this episode picks up the pace with flashbacks to Bill's vampire origins, more lunacy with Sookie's idiot brother, and a shocking cliffhanger. Steamy, sordid and often very funny, True Blood immerses you in the swamps of Southern Gothic. 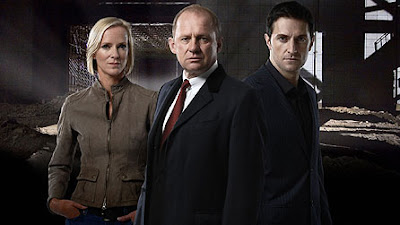 And back in grey old England, on BBC1, Spooks is back! Amazingly, this is the eighth series of the spy drama, with no signs of it slowing down yet. The team rush to save Harry whose past dealings with corrupt American and Indian spooks have caught up with him. The lineup changes yet again with tired old Malcolm retiring and Ruth returning from her enforced disappearance. Lots of clandestine meetings, tapping into surveillance systems, YouTube execution videos, striding down corridors, last minute rescues etc. etc. As they say, MI5 not 9 to 5.
Soundtrack: Empire State Of Mind by Jay-Z and Alicia Keys
99 Problems by Jay-Z
Posted by cerebus660 at 23:45