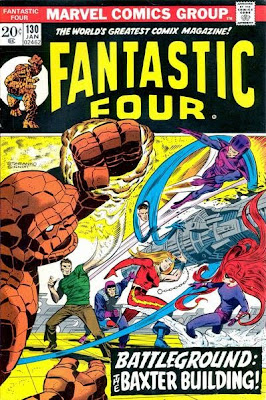 Two Steranko covers from Fantastic Four no.s 130 and 131, Jan. / Feb. 1973, inked by one of the mainstays of the early FF style, Joltin' Joe Sinnott.
Last week the mighty Mark from Bad Librarianship Now commented that the Steranko-ness of these covers gets sublimated by the Sinnott-ness of the inks. He's got a point: Sinnott's Marvel "House-style" does overpower Steranko's idiosyncracies somewhat. But even a conformist Steranko is streets ahead of most anybody else, in my opinion. 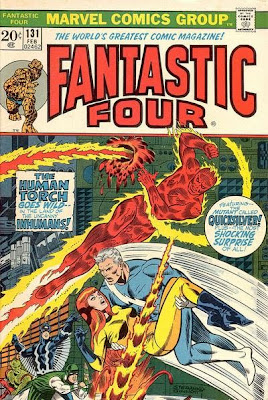 NB: Note the tag-line for issue 130 is "The World's Greatest Comix Magazine!" I don't know if this misspelling was an attempt to appear hip and groovy to the Underground Comix readership, but it only lasted for 5 issues before reverting back to "Comics". How sad am I to notice that kind of thing?
Soundtrack: Where Is My Mind? by Pixies
Posted by cerebus660 at 18:41