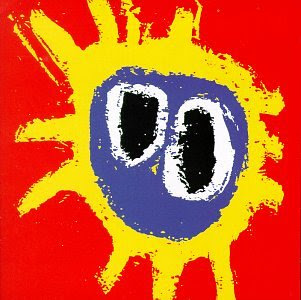 January 2000, first gig of the new millennium, the Scream! 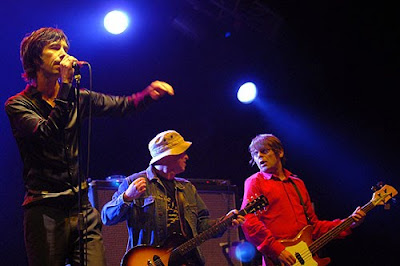 Amazingly, Primal Scream have been around since 1982. In that time they have changed and mutated from "C86" fey jangle-pop, to psychedelic revivalists, to indie-dance icons, to today's eclectic rock royalty. When I saw them in 2000 at the good ol' Gloucester Guildhall ( with my mate Glenn ) they were warming up for their Xtrmntr tour, the single Swastika Eyes having just hit the UK Top 40 and the album reaching number 3 in the charts. 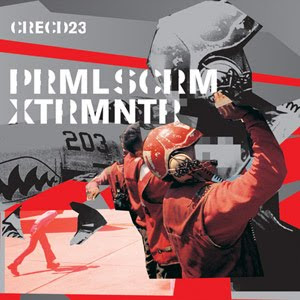 As the band came on stage Bobby Gillespie warned us "We're Primal Scream and we're here to f**** your heads up....."
And that's what they proceeded to do. Most of the set was the new Xtrmntr material which, although strangely lacking in vowels, was bloody good stuff. Songs like Accelerator, Shoot Speed / Kill Light and Kill All Hippies were explosive and expansive epics, with extra guitar pyrotechnics courtesy of My Bloody Valentine man Kevin Shields, and held together by Mani's dirty, funky bass-lines. Bobby threw some classic rock 'n' roll shapes while revisiting Screamadelica-era standards like Movin' On Up and Come Together, and faux-Stones rockers like, er, Rocks. As usual, he looked to be at death's door but managed to survive until the end of the set.
A great night of rock, psychedelia, old skool rave-rock and even a shot of ( shh! ) jazz into the bargain. Strangest sight of the gig: "Mad" Richard Ashcroft of The Verve striding through the venue wearing a huge Afghan coat and aviator shades, followed by two minders. We're not worthy!
Soundtrack:
MBV Arkestra ( If They Move Kill 'Em ) by the Scream.
Posted by cerebus660 at 23:40

I reckon Primal Scream are one of the most exhilarating live bands of all times....what do you think? Nothing sums them up better than this recent live review http://www.rivmixx.com/latest-headlines/primal-scream-live-report/7697/1

I reckon Primal Scream are one of the most exhilarating live bands of all times....what do you think? Nothing sums them up better than this recent live review http://www.rivmixx.com/latest-headlines/primal-scream-live-report/7697/1

Hi Cliverozario ( both of you! )
I missed this recent gig by the Scream, didn't even know about it until I was writing the above review and Googled Primal Scream, only to find out it was sold out. Bugger! Nice review and sneaky self-promotion :-)

The first Primal scream record I heard was Give out but don't give out, so I was convinced they were a rocky-blues-soul type band. Imagine my suprise when I heard Screamdelica and Vanishing Point. Still good tho.

One of the things I like about Primal Scream is how eclectic they are, but I must admit I prefer their dance side to their Stones-y side. Screamadelica still sounds as great today as back in '91.