Doctor Who: Series 10 Catch Up 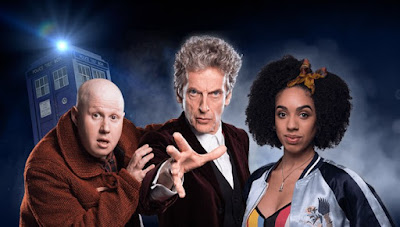 As has been pointed out to me by certain fellow bloggers ( initials KR and JP  -  who else? ) I've been neglecting the good Doctor's latest adventures so I'll do a very quick run down of my thoughts on the recent crop of stories, starting with 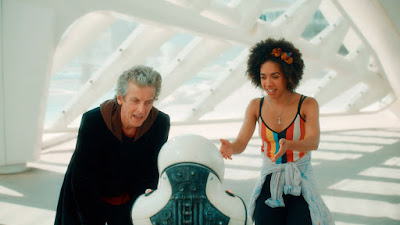 Smile
In the second episode of the series the Doctor takes Bill on her first proper Tardis journey into the future. They arrive at a human colony on a distant world which seems like a paradise... except there aren't any colonists. It turns out the AI that have been sent on ahead of the first settlers have gone haywire and have been using their seemingly-cute "Emojibots" to turn colonists into fertilizer.
This episode is designed to give the Doctor and Bill a chance to get to know each other while investigating this deserted world. There's some lovely location footage here ( filmed at Valencia's beautiful City of Arts and Sciences ) and some interesting moments between the two leads as Bill starts to figure out who the Doctor is and what he does. Unfortunately, there's not a lot else going on  -  the threat is never very convincing and the story-telling energy levels have dropped significantly since the first episode, so I'll give this a lukewarm Three Out Of Five Sonic Screwdrivers ( or Smiley Faces ) 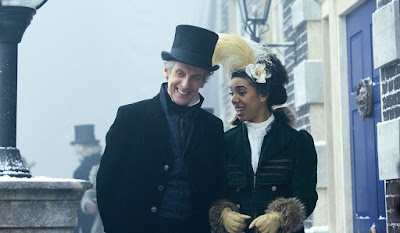 Thin Ice
The third episode is much better. Another fine script from promising newcomer Sarah Dollard
( author of last series' Face The Raven ) which sends our Time Lord and friend back to Regency England and the last of the great Frost Fairs. People have been disappearing in mysterious circumstances and something extremely fishy is going on underneath the frozen Thames.
This episode is a delight  -  lots of convincing period detail, some excellent effects and more charming moments between the Doctor and Bill. Underlying all this are themes of capitalism and racism which give the story some backbone... and give Peter Capaldi as the Doctor the chance to rail against the evils that men do ( always worse than the aliens ) and to actually punch out a bigoted capitalist fop. Well, he did once describe the character as 100% Rebel Time Lord. The only slight let down is the actual monster  -  a supposedly huge sea-serpent which, when finally revealed, is about as frightening as a fish finger. But, never mind, this is a wonderfully old-fashioned Who adventure with some modern twists which I'll award Four Out Of Five Sonic Screwdrivers ( or fish tails ) 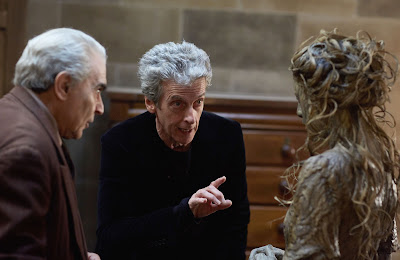 Knock Knock
There have been a few "haunted house" stories in Nu Who and the production teams always seem to find a new take on the old trope. In this episode, Bill and some friends are looking for student digs and end up in a creepy house, owned by an even creepier landlord ( the fantastic David Suchet ) who has no intention of letting them leave. There's something lurking in the walls of this creaky old building and Bill and her housemates are on its menu...
Another cracking ( and creaking ) episode with some genuinely spooky moments  -  especially if you have a phobia of insects en masse which Sarah certainly has ( she had to cover her eyes a few times during this one )  -  and an eerie but beautiful "monster" with a tragic secret. Capaldi and Suchet both give it the full thespian treatment and there's plenty of awkward humour in Bill's relationship with the Doctor  -  here more parent and child than teacher and pupil.
This one rates a Four Out Of Five Sonic Screwdrivers ( or creaky floorboards ) 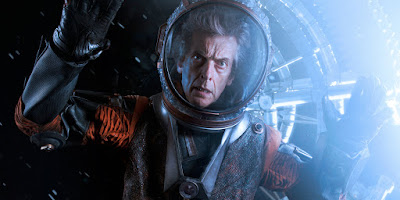 Oxygen
Probably my favourite so far, this episode has a take-no-prisoners script from the ever-challenging Jamie Mathieson, some proper science fiction concepts, beautiful special effects and some real jeopardy for the Doctor, Bill and Nardole. ( Yep, Nardole has a proper role in this story and Matt Lucas does a great job in showing the real person behind Nardole's bumbling facade. I have to admit I really misjudged him and he's growing on me episode by episode. )
The story is set on a mining station in deep space ( no, not Red Dwarf ) where evil capitalists ( see a theme here? ) are now even exploiting the very air we breathe and not even the dead are beyond the bosses' control.
A tense, claustrophobic episode with some beautifully played scenes by the main cast ( especially Pearl Mackie who knocks it out of the park ) and top-notch direction from Charles Palmer, this is sure to be seen as a classic in years to come. And that cliffhanger! Excellent stuff.
I'll give this one a breath-taking Four And A Half Out Of Five Sonic Screwdrivers

And still another 7 episodes to go this series! If this momentum can be maintained, Capaldi will definitely go out on a high...

I think I enjoyed Thin Ice best out of the lot of them, but they've all been surprisingly not bad so far.

For me, each episode seems to be a slight improvement on the previous one, so at least it's heading in the right direction. Let's hope it continues to build to a climax for that multi- Cyberman finale!
Anyhow, nice reviews, Simon, you've GOT to finish this series now!
:-)

Just watched tonight's episode, written by Steven Moffat, and it was a slip-back. Full of interesting visual images sure enough, but an underwhelming plot told in an unnecessarily convoluted way to make it seem more interesting than it is. Why does he do the back and forth stuff all the time, instead of just telling the story in a straightforward way? I'll tell you why - because he thinks it's clever. It's not 'though, it's just tediously pretentious.

I thought it was great, although I'll watch it again before I post about it. I don't have a problem with the non-linear story-telling: it helps create tension. I recently watched the BBC series The Missing which was told in three different time frames and was a brilliant example of gripping story-telling.

This is probably my favourite season since the show came back. I think the only episode that's disappointed me so far has been, "Knock Knock," and even that was fun up until the third act.

I loved, "Extremis." The almost funereal pace of this season's episodes is highly pleasing to me after twelve years of them trying to cram ninety minute storylines into forty five minute episodes. Capaldi has finally worked out how to play the Doctor with the same persona from week to week and Pearl Mackie is arguably the best actress ever to play a companion. Catherine Tate's probably her only rival on that score.

I've also had a theory about who the main villain of this season is going to turn out to be, and, so far, the show hasn't done anything to rule that person out.

Thanks for the comment Steve. Pearl Mackie is great, isn't she? I really misjudged her on the strength of that "Friend From The Future" preview - she's proved to be a wonderful actress indeed. I hope Bill isn't just a one-season-only companion but I suspect incoming showrunner Chris Chibnall would want to cast his own choice to go with his new Doctor...