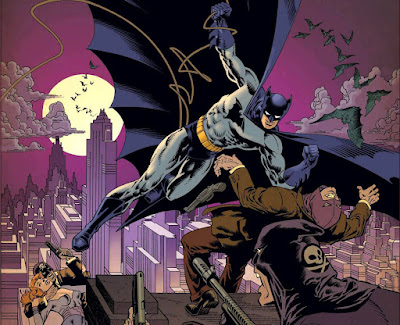 I've recently joined a Facebook group called Illustration Art Archives which is a wonderful resource for images from all different times and places. Sometimes comic book images are posted there and yesterday I came across this stunning Batman illustration by Jaunty Jim Steranko and knew it was destined for TGW-S. Apparently this was a variant cover for issue 33 of Detective Comics, part of the much-maligned DC New 52 revamp in 2014.
This lovely image got me thinking how cool it would have been if Steranko had worked for DC back in the 1970s and had drawn a Batman strip instead of moving into publishing. Of course, the Jaunty One was never too good with deadlines and his lovingly-rendered, time-consuming style just about functioned for 10 page strips in Strange Tales but I'm sure would never have withstood the deadening grind of 20-page monthly comics. Still, it's a nice idea...
Here's the actual cover to the comic... 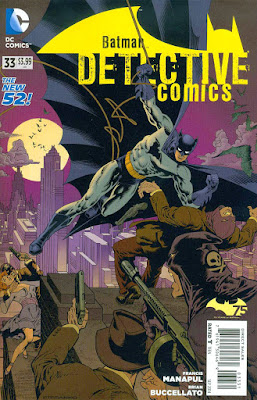 This is a classic take on Batman, with our hero ( yes, he was a hero at one point before he became a psychopath... ) battling mobsters against a typically Gothic Gotham backdrop of Art Deco buildings and cloud-shrouded moon. The only real problem for me in this composition ( apart from the bloody awful logo which isn't Steranko's fault ) is the hooded, er, hood at the bottom right who seems to be looking in completely the wrong direction. You'll never shoot Bats like that, buddy! I suppose it could be argued that Batman swung in so fast that the bad guy was left pointing his gun at the spot where he first saw the Caped Crusader... but I think it's probably more down to Steranko's occasionally wobbly sense of human anatomy. But, for all that, it's a lovely, retro piece in Steranko's often-imitated but never-equalled style.
And, as a Batman Bonus, here's the cover of the original Golden Age Detective Comics #33 from way back in 1939: 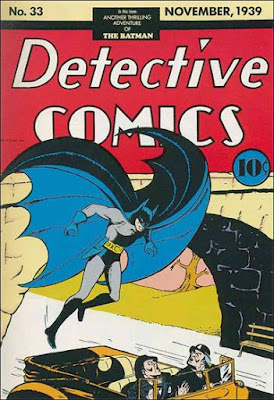 Isn't he shouting at the other guy to keep hold of the hostage? Ok, I may be overthinking it.
I sometimes follow Steranko on twitter and he seems to communicate solely in CAPITAL LETTERS AND EXCLAMATION MARKS!!!! Which is only right and proper, and what you'd expect.
BTW my mate Sean keeps trying to get Steranko to attend his Arts Fest up in the Lakes, and got close this year. I'll mention it on the blog if he ever succeeds!

You may well be right, Pete - that would make sense :-)

I'd love to see Steranko at a convention! If your mate Sean ( is that Sean Phillips? ) can swing it I'd have to get myself there...

Yeh, the man they call Philbo ( well, the man I call Philbo anyway)
Believe it or not, they came within a gnats whisker of getting Ditko there a couple of years ago too, before he decided he didn't do air travel anymore.
But if they ever do get Steranko, I'm sure Sean'll be shouting it from the rooftops - we'll have to see.

Ditko? Wow! That would have been some kind of exclusive! Would he have worn a Question mask to protect his anonymity?

I think Paul Gulacy did Steranko's style perhaps even better than Steranko himself.

The lady who organizes the arts festival knows literally nothing about comics, so when Sean goes 'You can't just phone up Ditko!!!' she goes 'Why not?' Apparently she sold it to him as a nice holiday in the english countryside, and he was semi-up for it before, as I say, deciding it was too far to fly at his age.
Kid, none of us mind Gulacy's Steranko stylings, do we? We might with lesser artists, but I guess that's just 'cos he's so damn good.

I wasn't aware that Steranko was still involved in comics at all. Yeah Gulacy did some lovely work on Batman a few years ago but some of his faces were a bit “off”.

As for Ditko I'll double that "Wow!" how amazing would that be.

Kid, Pete, Paul ( George and Ringo ) - thanks for the comments, guys.

My head's still spinning at the thought of Steve Ditko turning up to an arts festival in a rainy corner of the UK. We can but dream...

As for Gulacy's adoption of Steranko's style - he may not have been the innovator that the Jaunty One was but, if anything, Gulacy had a better grasp of sequential story-telling. Comic Book Fact Of The Week: Steranko aided his buddy Dan Adkins by inking part of a Paul Gulacy page from MOKF #38, the classic "Cat" story...