Doctor Who: Vincent And The Doctor ( review with spoilers ) 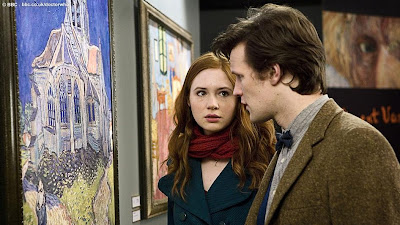 Yet another unfashionably late mini-review.....
"It seems to me that there's so much more to the world than the average eye is allowed to see. I believe, if you look hard, there are more wonders in this universe than you could ever have dreamed of." 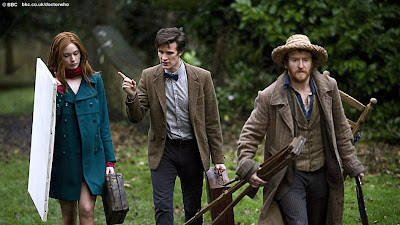 The Doctor and Amy take a trip back in time to 19th century Provence, where they meet yokels with improbable West Country accents, an invisible monster with an improbable haircut, and the world's greatest painter with an improbable Scottish accent. So is the episode any good? Probably.....
I'm just messing with you :-)
Vincent And The Doctor is a beautifully shot, wonderfully acted and emotionally draining episode. The chemistry between the three leading actors is a joy to behold, with Tony Curran's performance as vibrant but vulnerable Vincent a definite series highlight. The Croatian backdrops are exquisite, all cornfields and orange groves and swirling Van Gogh skies. While not being a fan of Richard Curtis' work over the last decade or so, I have to admit the script is fantastic - witty and scary and not afraid to confront the very adult theme of manic depression: brave indeed for a "kids' show". 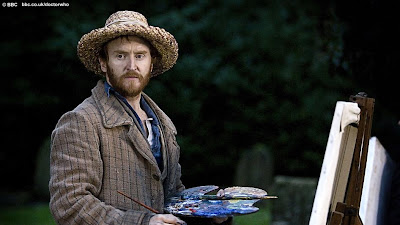 Just time for two more things: the mention of poor old Rory was subtle and sad, and Bill Nighy gave us a masterclass in how to turn a cameo appearance into a showstopper.
Five Out Of Five Bow Ties. ( "Bow ties are cool." )
Posted by cerebus660 at 23:49

The Nighy/Curran scene at the end was dynamite. I was in bits.

Hi, Cerebus, nice to see you back. Having read your more recent posts, I hope you're holding up OK in the face of everything.

As for the Dr Who outing, after a couple of episodes that left me colder than a silurian's blood, I enjoyed this story a whole lot more. I thought Curran in particular was excellent, and Karen Gillan looked rather lovely surrounded by sunflowers.

Hi Steve, thanks for the comment and the kind thoughts.

Hi, nice blog & good post. You have beautifully maintained it, you must try this website which really helps to increase your traffic. hope u have a wonderful day & awaiting for more new post. Keep Blogging!

I liked this one and again time can be changed.
The story gave it a human story as we were exposed to Vincents troubled life and his mind.
Because of a face at the window in the church they visit him and solve the mystery.
At the end the face isn't there but the sunflowers have that lovely dedication.

The Doctor was a bit naughty bringing Vincent into today where he heard The art critic say that he is the finest painter of them all, the most popular painter who managed to transform his pain into beauty, that he was not only the world's greatest artist but also one of the greatest men of all time.

Can you imagine if you were Vincent? A failure who can't sell his paintings for the cost of a nights meal come into his future and hear such a thing?
It's like myself finding an encyclopedia from the year 2200 and finding out that I was thought of as a notable writer!

I'm sure that would change me somehow and yet perhaps that change would inspire me to write more.

I felt moved by it and this is my favorite episode so far.