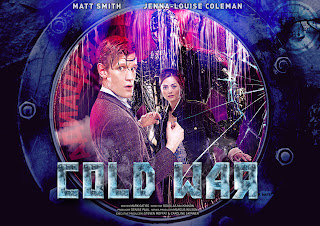 OK, two ridiculously late Doctor Who episode reviews are herein combined as one mini-review for your perusing pleasure. I've omitted the usual "reviews with spoilers" description since, surely, anyone who wanted to watch these stories has watched them by now.

This has to be the best Doctor Who script Mark Gatiss has written since The Unquiet Dead, way back in Series One. A tense, claustrophobic story with some great lines and a fascinating new slant on an old enemy. The Doctor and Clara are heading for Las Vegas but somehow end up on a sinking Russian nuclear sub at the height of the Cold War. Also on board is Grand Marshall Skaldak, an Ice Warrior recently thawed from a 5000-year sleep who is not happy to be there, seemingly abandoned by his people. Once Skaldak learns about the '80s concept of Mutually-Assured Destruction he's on a collision course with the Doctor to decide the fate of the Earth.

With many nods towards such films as The Thing and Alien, this is a beautifully-directed, atmospheric episode which pushes the boundaries of Saturday tea-time, family-friendly horror as far as they can go. The lumbering, hissing Ice Warrior is a perfectly-judged updating of a classic Who "monster" and there are some fine guest performances from submarine commander Liam Cunningham and scientist and Duran Duran fan David Warner. I was particularly glad to see Warner's character survive the story: it would be great to see that ever-wonderful actor in Doctor Who again. Another great showcase for Jenna-Louise in this episode  -  convincingly scared but brave in her confrontations with Skaldak and sharing a real warmth with David Warner's Grisenko.

Four Out Of Five Bow Ties ( or Model Subs ) 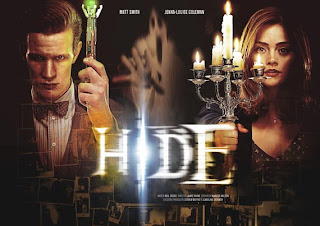 After the relative misfire of Neil Cross' last episode, The Rings Of Akhaten, this story is a vast improvement and obviously a subject closer to the writer's heart. The Doctor and Clara arrive at Caliburn House in the beige days of 1974 where former war hero turned ghost hunter Major Alec Palmer ( Dougray Scott ) is searching for the ghost known as The Witch Of The Well, with the assistance of the empathic Emma Grayling ( Jessica Raine ). The Doctor blusters his way into the investigation, posing as "the man from the Ministry", but  -  of course  -  he has an ulterior motive for being there. And, this being Doctor Who, the "ghost" isn't quite what she seems...

Hide is a cracking good yarn ( as no-one says any more... ) again rich in atmosphere and detail. It's a case of "spot the references" here as time and again the story reminds the ghost story fans amongst us of classic tales such as The Haunting, The Innocents and, especially, Nigel Kneale's The Stone Tape. There's some beautiful cinematography as the characters stalk the gloomy, Gothic corridors of Caliburn House and the even gloomier woods where something strange and twisted lurks. Director Jamie Payne conjures up some wonderful glimpses of the "ghost" and the "hider", often just outside of the characters' vision, illuminated by candle light or lightning flashes. The hesitant, touching relationship between Alec and Emma is skillfully communicated by stumbling conversations and brief glances  -  a masterclass from Scott and Raine in how to suggest so much with so little. This is probably my favourite episode of the series so far with many subtle and clever touches, from Clara's "conversation" with the Tardis to the final realisation that this was a love story ( or two ) and not a ghost story. And this story is one of those elite examples of Doctor Who where not one single character dies... which is nice because, again, the show has given us two memorable characters in Alec and Emma who I'd love to see return some day.

I am finding that Clara is taking me back to those early days with Rose Tyler who was a huge part of why I loved Doctor Who when it was rebooted in 2005. Plus the mystery of Clara is interesting and I hope my theory pays off in the end.

Jenna-Louise is indeed wonderful as Clara and I have to admit I'm not missing Amy at all. Fickle moi?

I actually found both episodes too derivative of other sources to be as enjoyable as they should have been, although 'Hide' was the better of the two. Not much better 'though, as Dougray Scott was pretty much wasted (as was Alexander Armstrong in one of the Christmas eoisides) and not really given much to do or anything interesting to say.

Once again, Matt Smith's inane chatter was extremely irritating and I'm starting to long for a Doctor with a bit of gravitas. Smith's Doc seems to be having too much of a good time in the face of danger, as if it's all a bit of a game - which kind of dilutes any sense of suspense. In my review of a previous episode, I said that Duncan Norville - with his catchphrase of "Chase me" - would suit the current tone of the show, and blow me down if the Doc didn't utter these very words in 'Hide'.

Saturday's Tardis episode was surprisingly slightly more enjoyable, in spite of regurgitating the tired formula of running through seemingly endless corridors, with doors being slammed shut behind them or offering escape in front of them, but the show still needs to lift its game in my opinion, if it wants to survive for much longer beyond its 50th anniversary in November.

Tellingly, I no longer have any sense of expectation for each new episode, not even watching them when they're broadcast, as I used to do religously. Now I watch them later on iplayer when there's nothing else on TV worth watching.

I still have a lot of time for Matt Smith's Doctor and I personally think he does a great job of turning on the seriousness when required. But... "inane chatter"? I think this is a charge that could, at various times, be levelled at each past Doctor, with the possible exceptions of Season One Hartnell, Pertwee and Davison...
The Doctor has been shown many times to be a trickster character, fooling people into believing he is not serious, while he schemes away in the background. This was a template established by Patrick Troughton which has been repeated many, many times over the years.

As for this week's episode I must admit I felt a bit let down, but I will watch it again before I write my review...