A Doctor by any other name... 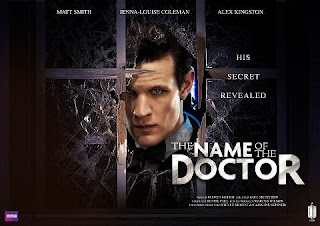 The BBC have announced today that the final episode of Series 7 of Doctor Who ( or Series 7b if you prefer... ) is titled The Name Of The Doctor. And apparently us viewers need to "stand by for something that you might always have believed to be impossible..."
Steven Moffatt's been dropping hints for a couple of years now that the Doctor's "greatest secret" would soon be revealed. But... do we need to know his real name? Won't it take away the essential mystery of the character? It's been hinted that Time Lords choose their names ( eg The Master or The Corsair ) to suit their personalities or ideals, so the Doctor must have had a name once, instead of just a title. But, whatever it might be  -  Theta Sigma? John Smith? Matt Smith?  -  wouldn't it prove to be a massive let-down once the cat's out of the bag? You can almost guarantee you'll be disappointed: it'll be too mundane, it'll be too exotic, it'll be too obvious etc. etc.
Personally, I think this will prove to be yet another piece of misdirection along the lines of The Doctor's Daughter or The Doctor's Wife. They didn't actually, really, truthfully turn out to be his real daughter or wife, did they? Moffat likes his "slutty" episode titles, like Let's Kill Hitler, which draw people in and guarantee hype and press coverage... and this particular title will certainly do that. Of course, this series finale will also lead into the 50th Anniversary special, so I wouldn't expect too many secrets to be revealed just yet...

( Oh yeah... due to various technical hitches my review of last Saturday's Cold War is even later than usual. I'll probably combine it with the review of this week's episode, Hide. Slapped wrists all round. )