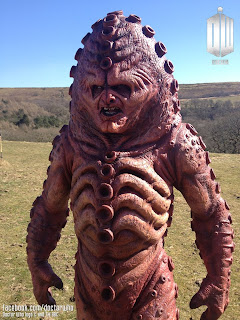 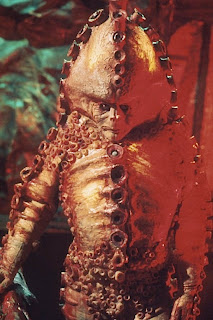 The Doctor Who news is flooding out of the BBC at the moment, probably because filming of the 50th Anniversary Special has begun and they're attempting to beat the tabloids to the revelations.
( Which is what happened when the Cybermen were re-introduced back in 2006. )

The latest old monsters to return are the Zygons, everyone's favourite shape-changing embryonic crustaceans, last ( and only ) seen waaaaay back in 1975's Terror Of The Zygons. They left such an indelible impression with just that one story that long-time fans have been clamouring for their return ever since. And here they are above in both new and old incarnations. As with the Ice Warriors, the old design is such a testament to the skills of the original artists that it needed very little updating.
( TBH I think I prefer the original but I'll reserve judgement until I see them on the small screen in all their lumpy glory. ) 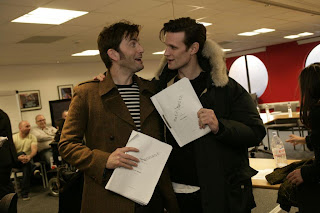 Of course, this all comes hard on the heels of yesterday's announcement that  both Billie Piper and David Tennant will be returning for the 50th Anniversary. Cue two Doctors... and the inevitable slash fiction...
Things are certainly hotting up... and it's still a long time until November.

In other welcome Doc news, this time with a literary flavour, Philip Reeve, author of Mortal Engines, has announced on his blog that he has penned a Doctor Who novella, The Roots Of Evil, starring the Fourth Doctor and Leela. Which sounds very cool indeed...

Email ThisBlogThis!Share to TwitterShare to FacebookShare to Pinterest
Labels: books, Doctor Who, TV