Doctor Who: The Bells Of Saint John ( review with spoilers ) 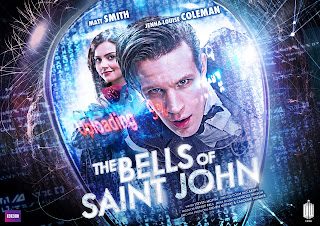 The ringing of the Bells Of Saint John is a wake-up call for the Doctor and the programme itself: yes, the Ponds have gone, but now it's time to stop moping, move on and have some fun...
It is the 50th anniversary year after all... 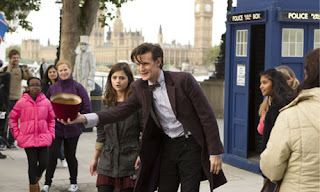 Series 7 continues after an extended break as the Doctor "luckily" runs into Clara Oswald again. This modern version of Clara is a child-minder in contemporary London who has no computer skills and rings a help-line when her Wi-fi goes down... which somehow connects with the Doctor, who's gloomily exiled himself to a 13th century monastery. ( Do we sense the hand of River Song in this? ) The Doc springs into action to again try and solve the mystery of The Woman Twice Dead. As another Steven Moffat character might say "The game is on..." 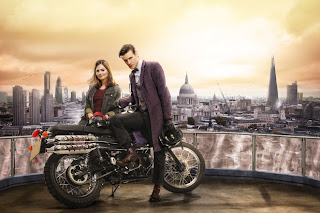 "Suppose there was something in the Wi-fi harvesting human minds...?"
There's your high concept for this episode. We're all tapping away at keyboards on laptops, netbooks, tablets... all at the mercy of a hungry alien intelligence. Well, OK, it's the Great Intelligence again  -  gifting us with a short, but very welcome, appearance from the great Richard E Grant. ( Quite poignantly, actually, for us Withnail fanatics after the recent sad passing of Richard Griffiths. ) He, or it, is pulling the strings of glacial businesswoman / villainess Miss Kizlet, wonderfully portrayed by the excellent Celia Imrie. From her eyrie atop The Shard she controls the world's Wi-fi, switching people on and off like puppets, and even managing to drop planes out of the sky onto London... 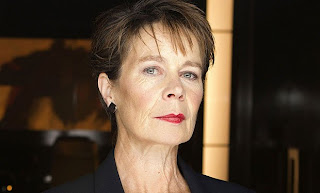 The Bells Of Saint John is a fast-paced, glossy episode with definite hints of recently-demised BBC programmes like Spooks or Hustle in its high-tech, high-rise view of London. In fact, it reminds me a lot of Partners In Crime, the opening episode of Series 4  -  reintroducing a previous character as a permanent companion, lots of scenes in offices, a power-suited woman as antagonist and so on. Unfortunately, the "minds being uploaded" concept and the head-spinning Spoonheads themselves ( robotic Wi-fi base stations ) are very derivative of that series' "Library" two-parter, which is this episode's main failing.
However, there is plenty to love here: the Doctor's "anti-grav" ride up the side of The Shard, the concept of a "snogging booth", the mystery of Clara ( what's with that leaf? ), the gorgeous location footage, Miss Kizlet's tragic fate, the witty digs at modern day life, the Doc looking cool with fez, bow tie and Pertwee-esque new purple clobber... 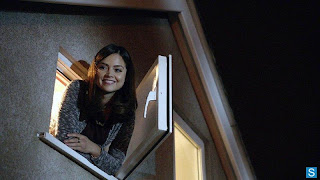 And, of course, the radiant Jenna-Louise Coleman, making her third "first appearance" as the contemporary version of Clara. Subtly different to her "Souffle Girl" or "Victorian Governess" iterations, this is a confident, modern character with plenty of charm, a real twinkle in her eye and that mystery at her core...
Coleman and Smith are a delight together, a fizzing chemistry between them already apparent, promising great things.

I'm torn between giving this episode a 4 rating or a 3 1/2 ( mostly due to some recycled ideas ) but, sucker that I am, looking at JLC's smile above has warmed my frosty heart, so I'll go for...

PS I've been doing this Bow Tie Rating system for a long time now and I'd just like to remind everyone that it was the lovely Michelle / Mickey Glitter who first gave me the idea. Cheers!

I enjoyed it a lot, possibly because it felt more like an RTD ep than a Moffat one. Also because I like the Shard and was happy to see it in all its glory.

I must admit it was a relief to finally get away from the Ponds - even if Amy still managed to get a sneaky mention.

I thought Smith was excellent.

Yeh I loved this one too. Jenna is golden. And what about the girl working in the shop - that gotta be Rose who gave Clara that number.

@Steve
The Shard is a thing of beauty, isn't it? Although having alien conspirators working in its offices probably isn't the best advertisement...

Much as I enjoyed the Doctor/Amy/Rory dynamic it had run its course and, like I said, I think the show needs to bring back more of the spirit of fun from the RTD days.

@Calvin
Jenna's lovely and I can't wait to see her take more of an active part in the story. Next week's episode looks amazing!

You could be right about Rose, Cal. Especially now we know that both Billie and David Tennant will be back for the 50th anniversary. Billie and Jenna together - your loyalties will be divided my friend :-)