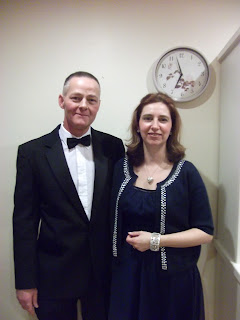 It's not very often I get invited to Black Tie events. In fact, I'd never been invited to a Black Tie event until I was asked to join in with the 25th anniversary celebrations of my favourite venue, Gloucester's Guildhall Arts Centre. So what else could I do but hire a tux? Here are Sarah and I getting in the party mood... 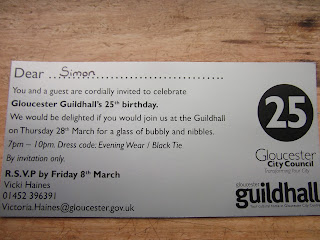 It was only through my membership of the Guildhall cinema's Film Focus Group and Film Club that I received the invitation ( thanks Chloe! ) but it was certainly a pleasure to support the venue that I've been going to for so long  -  25 years to be specific. Just a quick run down of some of the bands I've seen there over two and a half decades reminds me of how many great times I've had in that building:
Ash, S*M*A*S*H, The Damned, The UK Subs, The Supernaturals, Catatonia, Carter USM, Goldblade, Six By Seven, Lambchop, Symposium, Primal Scream, Antiproduct & Marky Ramone, Chinese Burn ( of course! ), Carbon/Silicon, Cud... and the latest gig being last Saturday's epic show by the awesome Dexy's!!! ( Review to follow... ) 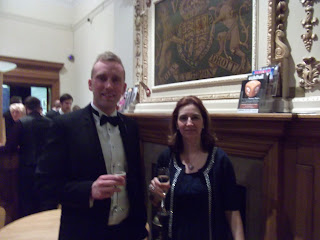 Here are Sarah and my good friend Tom ( of The Sensitive Bore fame ) enjoying some purely medicinal champagne... 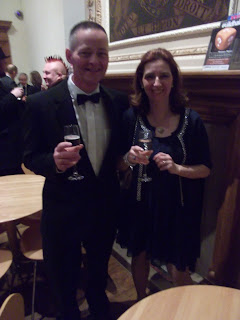 And here's me, only pretending to drink the champagne. I was still on quite a lot of medication at the time so drinking wasn't really an option. I couldn't taste anything anyway so it would have been like drinking fizzy water. I think I had about four sips for appearance's sake. This was my first night out since finishing my radiotherapy and we were unsure how I'd cope with it, but I think I did quite well. We were out for a couple of hours and I didn't get too tired. Every day I'm getting stronger, eating more ( after losing two stone in weight! ) and needing less sleep...which is all good... 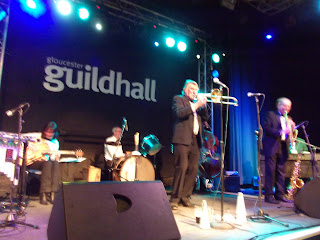 The entertainment in the main hall was slightly more civilized than the usual Guildhall gig: a Swing Jazz band, average age approx. 93, who were pretty cool and got plenty of feet  a' tappin' with some smooth standards, including an ultra-slow rendition of Mack The Knife. 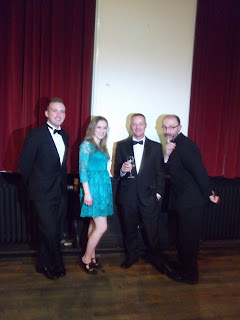 As we were all decked out in tuxes it was compulsory for us blokes to act out our James Bond fantasies. Above are world's greatest Sean Connery fan Ross, Tom and myself posing with a very reluctant young lady, whose name I have embarrassingly forgotten. ( I'll just refer to her as "Lucia's daughter" 'cos that's her mum's name. Sorry. ) 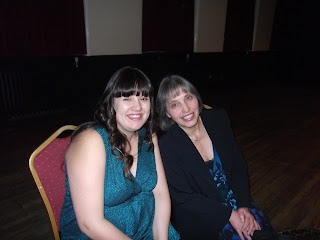 And here are Lucia herself ( on the right ) and Film Focus Group head honcho
( honchette? ) the lovely Chloe. Chloe has worked tirelessly to build up the Guildhall's cinema from a loss-making exercise to a successful, profitable asset to the City. She's leaving soon to have her first baby so there's plenty more hard work to come :-) 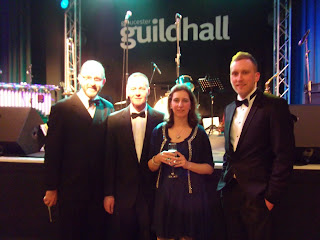 More posing  -  Ross and I obviously enjoying our time in the spotlight... 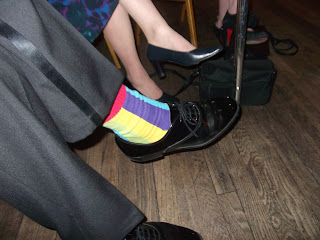 And Tom's amazing socks which were the highlight of the evening :-)

Seriously, we all had a great time and it was indeed a joy to support the Guildhall and all the hard-working staff. There were some local dignitaries present, basking in the reflected glory, but I couldn't care less about them. The success of the venue is down to the bands, the artists, the dance instructors, the projectionists, the staff and all the punters who make this tiny jewel in Gloucester's crown my favourite venue...

The long-awaited Gloucester Guildhall 25th Anniversary post and it didn't disappoint! I cannot remember having a more enjoyable Easter weekend than this one. First this, then the volunteering as part of the open day on the Saturday. I am so very thankful that we have an arts centre as great as ours.

Hi Tom! It did take me a while to get around to this post. Various PC problems haven't helped, Anyway, at last your socks have their moment of fame :-)

I should have mentioned the Open Day as well but forgot... and didn't have any photos anyway...

Just look at that posh couple in the top photo! It's like you were born to wear a tuxedo. It's almost unfair you had to rent one.

(N.B.: I rebel against suits and ties and formal wear as a rule, but there's no denying it makes a special occasion look even more special.)

I'm thinking of wearing a tux more often: when I'm out cutting the grass or heading down the supermarket for milk... things like that...