Doctor Who - The Pilot 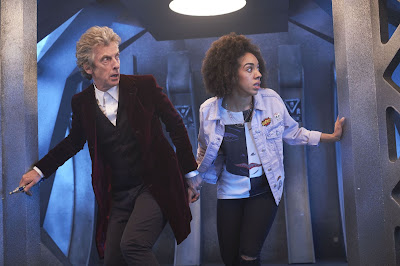 "What's the one thing you never see when you look at your reflection...?"

The tenth series of Nu Who finally kicked off on Saturday with The Pilot, an episode showcasing new companion Bill Potts, the Doctor's new job as a university lecturer and, in the words of a previous story, a "sinister puddle". 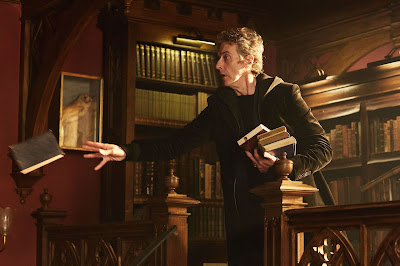 As the episode begins the Doctor appears to have given up the old time and space travelling and has settled into quarters in the fictional St. Luke's University in Bristol, even hanging an Out Of Order sign on the Tardis door. ( There is, of course, a Mysterious Reason for this. ) He's noticed that kitchen worker Bill has been turning up to all his lectures even though she's not a student and he arranges for an interview with her, via his PA / batman, the possibly-cyborgised Nardole. Seeing something promising in this under-appreciated young woman, the Doctor offers to become her private tutor  -  an Educating Rita-like relationship, except this lecturer is an alien not an alcoholic.
A chance meeting between Bill and Heather ( a girl with a strange star-like marking in her eye ) and the discovery of a strange puddle of something that looks like water but isn't propels the Doctor, Bill and Nardole into a desperate chase across time and space. ( I knew that Tardis wouldn't stay Earthbound for long... ) 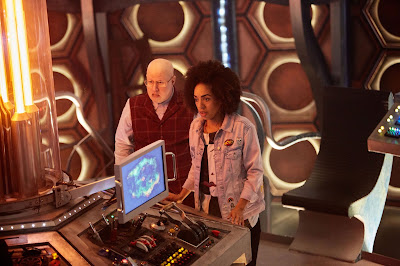 Surprisingly, considering the show will be rebooted next year with a new Doctor and new showrunner, this opening episode already seems like a reboot. In a similar way to Rose, the very first episode of 21st century Doctor Who, this story gets back to basic principles: a young woman with a lousy job but much potential meets a madman in a box who whisks her away into a far more dangerous, but exciting, world. There are a couple of nods to previous characters ( River and even Susan Foreman ) but, beyond that, there is no hint of backstory or need for prior knowledge. This is a fast-paced and colourful episode, fizzing with style and energy, not bogged down by arc plots or continuity. The menace of the week is briefly sketched but effective ( even if it is yet another example of the "broken spring" plot ) with a lovely turn by Stephanie Hyam as Heather, the unwitting Pilot of the title. 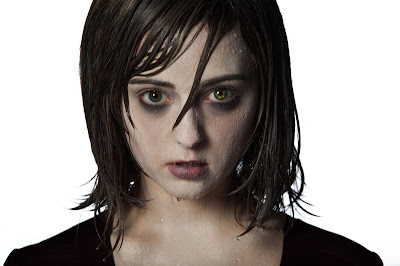 Of course, the most important aspect of this story is the introduction of the new companion. The first glimpses of Bill in Friend From The Future ( the sneak preview from last year ) weren't too encouraging  -  she just came across as irritating. Luckily, this proper introduction shows that Pearl Mackie is more of an accomplished actress than previously suggested. Bill is bright, lively and very down to earth, and her unrequited love affair with Heather is both sad and sweet. After Amy and Clara seemed to be inextricably linked with the madness of the Doctor's world from day one, Bill seems more like one of us  -  a normal person whose life could do with just a little bit more excitement. Her role seems to be that of the companion who asks the questions everyone else has missed. Hopefully this won't become irritating ( there's that word again ) but will flow naturally from the character. Welcome on board, Bill!
All in all, a very promising start to the Twelfth Doctor's final run, so I'm giving this:

4 out of 5 Sonic Screwdrivers 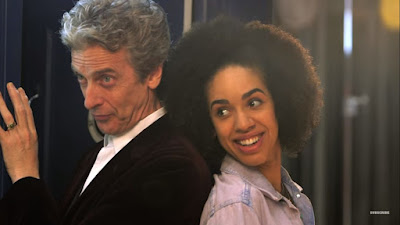 It was certainly better than I expected, but there was still a hint of that irritating vagueness that Moffat is so fond of. Capaldi seemed a lot more comfortable in the role, and it's a shame he's leaving just when he seems to have found his feet. However, more enjoyable than most of the episodes from last series. I just hope that's not all we're going to see of The Daleks before he jumps ship. Er, I mean regenerates.

I enjoyed it. It wasn't a masterpiece but it was pleasing to see Moffat finally get back to producing an episode that didn't just seem to be him randomly flinging stuff at a page. I give it seven out of ten.

Thanks for the comments, gents. I thought this first episode was a great start to the series and an ideal jumping-on point for new or lapsed viewers. But, as Kid says, it's a shame Capaldi isn't sticking with the show a bit longer...

Stephanie Hyam would actually make a really good female Doctor. Look at this image and tell me i'm wrong: Link to image

Thanks for commenting, Doc! I'm still not totally sold on the idea of a female Doctor - part of me thinks "why not?", while another part of me thinks it's too "gimmicky". Stephanie Hyam was certainly impressive in that episode, wasn't she? Maybe her time as a Gallifreyan will come one day...