Things I didn't blog about in 2021 Part Three - Madi: Once Upon A Time In The Future 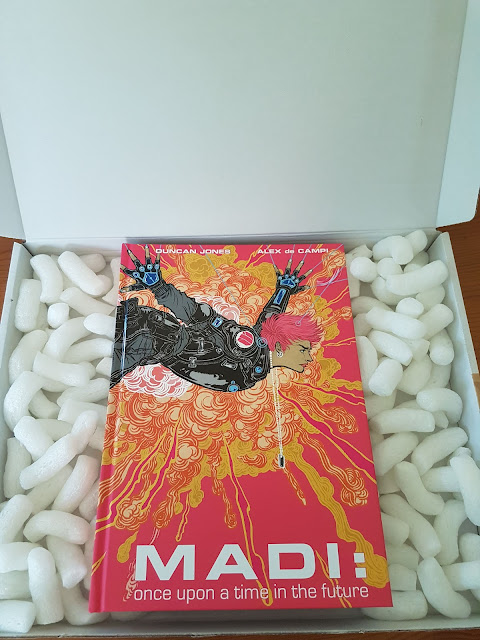 Yes, Dear Reader, you guessed it  -  I'm still looking back at things which I really should have blogged about in 2021 but didn't due to the general existential crisis we were coping with last year, and because I'm a lazy git. I reckon I can get away with these posts until at least October. Well, maybe February.
As I mentioned here in my review of Dan McDaid's wonderful Dega there was an upsurge of graphic novels / comics being crowd-funded and published via platforms such as Kickstarter last year. With comic shops shut from 2020 into 2021 a lot of creators had to find other ways of getting their projects released. Once such project was the science fiction graphic novel Madi: Once Upon A Time In The Future by Duncan Jones, Alex de Campi and a host of top artists... 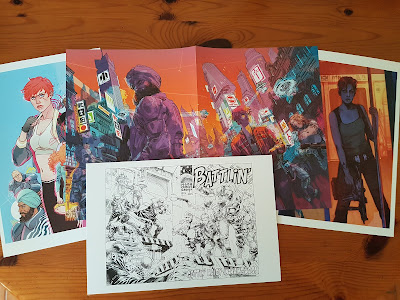 You could contribute different amounts of money to different "tiers" ( not the Covid kind ) and receive ever-escalating rewards for your cash. For my money I got the absolutely HUGE hardcover edition of the graphic novel plus some lovely art prints and a highly-prized "J-Squad" badge. ( "Who are the J-Squad?" you may reasonably ask. Well, read on. ) I imagine if you contributed to the highest tier the creators themselves would have delivered the book to you, the ink still wet, and maybe helped out with the housework. But I was very happy with the version I received... many months after the expected deadline. Seemingly interminable Brexit / Covid -related delays put the book back and back and no doubt put Jones & de Campi off ever doing such a thing again. Which would be a shame because their fictional, near-future dystopia is far more entertaining than the one we're living through. So, what's the actual book like? 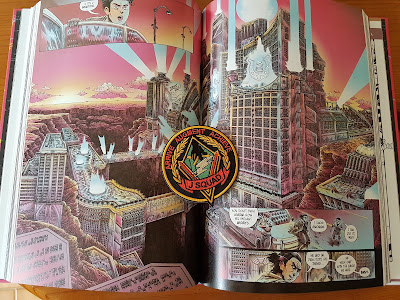 The tag line on the back cover describes Madi as "a globe-spanning action adventure in a world of drones, militarised multinationals and bad options. But mostly, it's about family." Madi ( the character ) is a grunt in a private army, employed by the Liberty corporation to fight corporate skirmishes, mostly involving securing cutting-edge technology at any price. Like the rest of J-Squad ( "Arrive, Augment, Achieve" ) Madi is basically a cyborg mercenary, a former Special Forces soldier with various bionic implants or augmentations for strength and speed who, crucially, can be remote-controlled by operators via a chip in the back of her neck. As Madi puts it: "Our training gets us to the target and then, by teleoperation, specialists do whatever needs to be done, through us. Maybe you need a brain surgeon behind enemy lines. A bomb disposal expert. A therapist..."
On a mission to retrieve some priceless information, Madi finds said information is actually in the brain of a pre-pubescent boy and things begin to go spectacularly wrong. The story combines cyberpunk with a sprawling road trip, some occasionally goofy humour and lashings of the old ultra-violence. Madi ( the book ) is the third part of a loose trilogy, the first two installments of which were Jones' movies Moon and Mute ( a lot of "m"s here... ) but, after finding he couldn't get funding for part three, Jones collaborated with Dracula, Motherfucker! author Alex de Campi to adapt the screenplay into a graphic novel. Reading the book you can really see how this would have played out as a movie, with some scenes screaming out for a huge budget which, luckily, isn't such an issue on the printed page. Jones had put the word out on Twitter that he was looking for artists and, sure enough, an enthusiastic gang of illustrators turned up to help realise the project. There's an eclectic mix here from the 2000 AD / indie Brit school ( Simon Bisley, Glenn Fabry, Dylan Teague ) to the Manga stylings of James Stokoe to the clear lines of Tonci Zonjic. The transitions between differing art styles can be jarring but there's some wonderful artwork on display here. De Campi & Jones' dialogue is often sparse but also witty with characters sharply delineated by their actions as much as their words. And, speaking of characters in action, here's a lovely sketch of Madi by the amazing Dylan Teague... 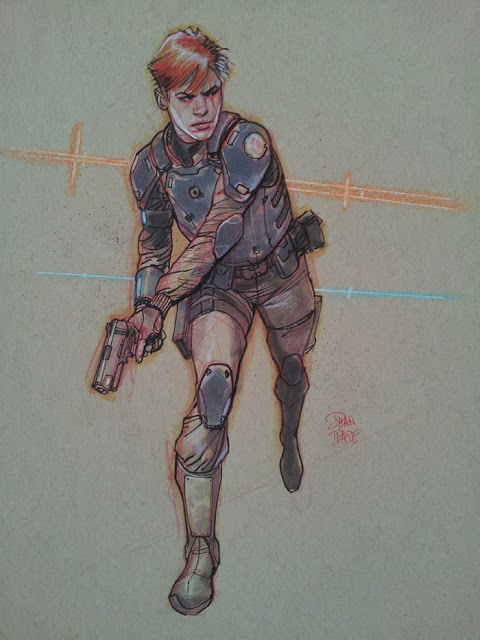 Madi: Once Upon A Time In The Future is a blast, a widescreen spectacular that's well worth a read if you can track it down  -  I believe there are copies out in the wild from Z2 Comics  -  and I'm so glad to have been part of the project in my own small, "give-us-yer-feckin'-money" kind of way. I'll leave you with some more Madi artwork from Duncan Fegredo: 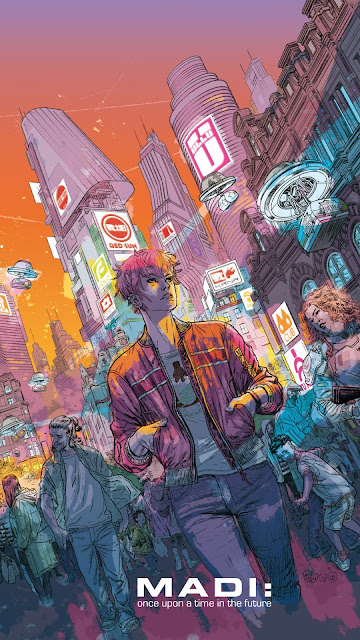 Huh. Spooky - I was just listening to the latest Hawkbinge podcast, about Live '79, earlier.

Er, anyway, having blown my cool with that admission...
I saw some rather brilliant storyboards/artwork for 'Moon' by Glenn Fabry ages ago, but never got to see the film (and I think 'Mute' is only on Netflix?) so thanks for the pointer on this Simon.

No problem, Sean. As the American Comedian Steven Wright used to say "It's a small world. But I wouldn't want to paint it."

Moon is definitely worth a look. It's a great little film with a wonderfully subtle and surprising performance by Sam Rockwell. It's not exactly laugh-a-minute though :-)
Unfortunately, I haven't seen Mute - the last time I checked Netflix it had gone. I think Jones' "trilogy" is only very loosely strung together so it would be very easy to read Madi without having seen the films first. And, as I blathered on about in my post, I highly recommend it.