Things I didn't blog about in 2021 - Part Two: The Skids at Gloucester Guildhall 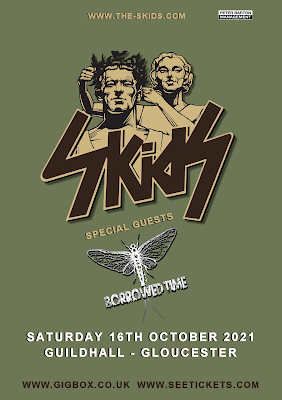 Apart from the obvious difficulty in meeting friends and relations, the biggest social impact the bloody pandemic has had on me has been curtailing my usual gig-going habits. I appreciate that's not really a big deal when millions have lost their lives and had their health ruined by Covid-19, but it's certainly not helped my mental health. ( Although it's probably helped my bank balance. ) My last gig had been back in January 2020, just before the pandemic hit the UK, and as gigs and tours got cancelled all over the world the future of live music was very much in doubt. By the end of Summer 2021, after many of us had thankfully received our vaccines, it looked like gigs could be back on the agenda. I was due to see the mighty Ash in Bristol in August ( a gig put off from 2020 ) but still felt unsure about being in a crowd and, coupled with Sarah's concerns about me being in such a situation, I reluctantly missed it. Another gig I'd been waiting for was the return of the equally-mighty Skids to Gloucester's Guildhall, with local heroes Borrowed Time in support. This gig finally happened in October and by this point we felt slightly more comfortable about going out so we put a brave face on it, put our best feet forward and stepped out Into The Valley... 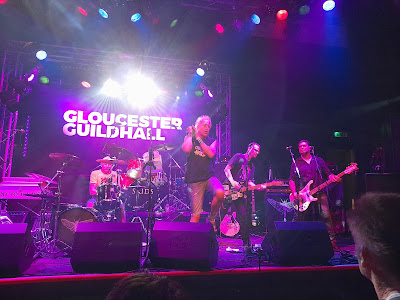 Well, into the Guildhall anyway. It was slightly daunting to be back in a venue, surrounded by people ( mostly ) not wearing masks, although the majority wore masks at the bar or in the corridors. It was lovely however to see so many old friends again. We went with our good friend and regular gig-companion Caz and met up with loads of people we hadn't seen in ages, including Ben from Chinese Burn, Mark from those Death Planet Commandos, my mate Fergus from work, the dashing David Rose ( follow the link to David's blog ) and many more besides, including the Borrowed Time boys  -  Glenn, Cliff, Rob, Marcus & Steve. It was a treat to see them back on stage where they belong, as tight and enthusiastic as ever. They played a cracking set, packed with old favourites and even some ( gasp! ) new songs, with the most appropriate probably being Day We Broke The World. Let's hope we can fix it too. ( Here's Rob from BT not doing too well at the old social distancing... ) 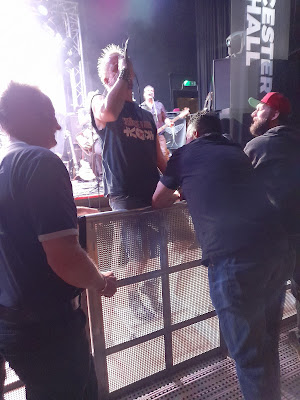 And then, with the familiar, bubbling-synth sounds of Peaceful Times booming out across the hall, Dunfermline's finest took to the stage. 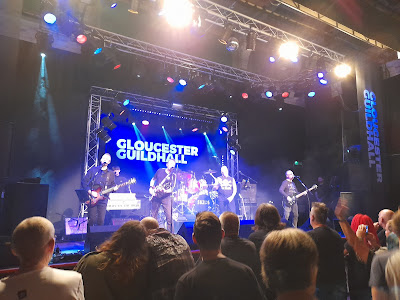 The expected one-two punch of the growling Animation and high energy Of One Skin kicked the set off in style and the classics kept coming: Charles and The Saints Are Coming flew the flag for the early years and a powerful Kings Of The New World Order brought us ( nearly ) up to date with the more straightforward 21st century Skids sound. The band were on sparkling form, the twin guitar interplay of Bruce and Jamie Watson just outstanding on such favourites as Out Of Town and Masquerade, while Richard Jobson was his usual ebullient self, as happy telling his outrageous between-song tales as he was whirling around the stage, his throaty roar as powerful as ever. ( But, please Jobbo, can you retire the Leo Sayer story now? It's getting a bit stale. ) A large chunk of the set consisted of anthems from The Absolute Game, which was bloody great to hear, Hurry On Boys and the awesome Woman In Winter causing mass outbreaks ( sorry ) of crowd chanting, all orchestrated by a beaming Jobson. I could have done without the Punk karaoke section which again featured The Skids covering pogo-era classics for no real reason. To be fair a lot of people seemed to like this chance for a cheesy singalong but I don't personally want to hear anybody but The Clash performing Complete Control. And The Clash don't exist. But apart from that, it was all good, boisterous fun with a rousing rendition of  The Olympian leaving us "Whoah-woahing" to our hearts' content. 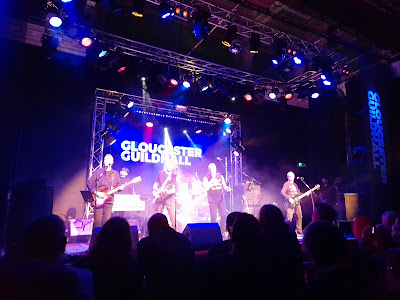 This gig turned out to be my only one of the year as the Winter drew in and the expected resurgence of Covid-19 ( now in its ultra-catchy new Omicron form ) meant that events started to be cancelled again and many of us began to withdraw again from large gatherings anyway. But, as my lone 2021 live music experience, it was a fantastic one and I'm so glad we took the plunge and went along and, most importantly, came away happy and healthy. Fingers crossed that 2022 will see some respite from the damn virus and we can again enjoy such wonderful nights. 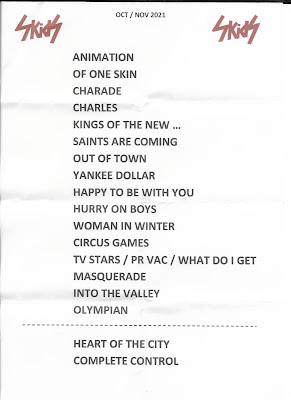 ( The set list above was nicked from David Rose's blog. Cheers, mate! )

I'm a big Skids fan so glad you managed to see them - "into the valley" is a great wee tune. I haven't been to a gig since around March 2020 and can't see me going to one until COVID is under control as I need to keep safe for my partners mum and dad who are on an "at risk" register . P!us gigs are back to being stopped in Scotland again for a while. Still fingers crossed for the next few months. .... I miss gigs.

The Skids are just great, aren't they? I wish I'd seen them back in the glory days of the late Stuart Adamson but the modern line-up is still very impressive and well worth catching.
Yeah, gigs are going to be very difficult for a while at least. That Skids gig was a welcome diversion from the not-going-to-gigs "new (ab)normal" but that's it for now...