Recent Gigs: The Jesus & Mary Chain and The Dandy Warhols 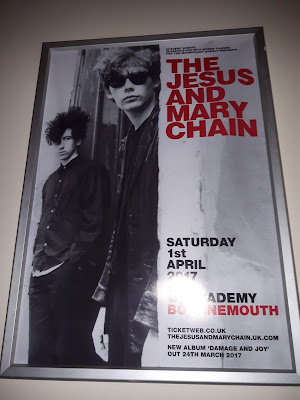 Last weekend Sarah and I had a trip down to sunny Bournemouth to see one of my all-time favourite bands, the Jesus & Mary Chain. It had been 25 (!) years, almost to the day, since we previously caught them on the fabled Rollercoaster Tour with Blur, My Bloody Valentine and Dinosaur Jr. so I was well overdue for a follow up... 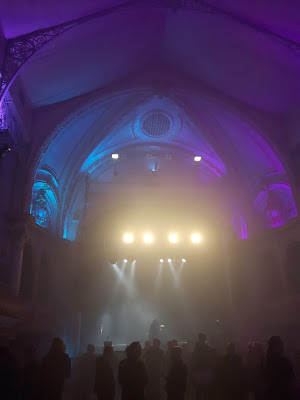 The venue was the Bournemouth O2 Academy  -  which is actually in the slightly more low-rent suburb of Boscombe. It's a lovely venue: a converted theatre with an impressive, cathedral-like look to the buttresses holding up the roof, as you can see above. In fact it reminded me of the Tardis interior from the 1996 Doctor Who TV movie but that's just my Whovian imagination overreacting as usual...
Or is it? We found this familiar blue box in the street, just yards from the venue... 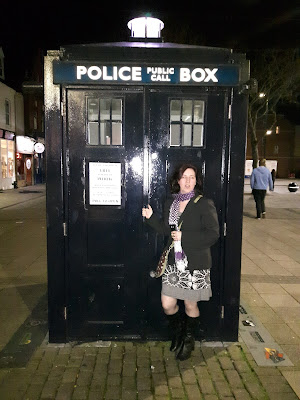 Anyway, back at the gig, we got there too late for the support band, Is Bliss, literally arriving as they were finishing their last song. They seemed to have a very expansive, Shoegaze -type sound but I couldn't comment any further. Maybe I'll catch up with them another time. After what seemed an age of pre-gig sounds ( the Velvets, Chuck Berry, and many more J&MC inspirations ) the house lights finally dipped, the smoke machine was cranked up and the brothers Reid took to the stage with the latest incarnation of their band. 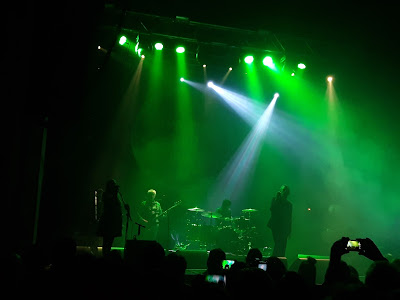 Yep, somewhere behind all this dry ice is the Jesus & Mary Chain. They started with the first track from their new Damage And Joy album, Amputation  -  a real statement of intent as Jim Reid intoned over and over "I'm a rock 'n' roll amputation"  -  yes, they're back after all the drugs, fights and solo projects, still chasing that impossibly romantic rock 'n' roll dream. As I said to fellow blogger Elektra Luxx recently, the Mary Chain may stick to a formula... but it's a great formula.
Next up was the first oldie of the night, a perfect version of the classic April Skies, very appropriate for a glorious first day of April. The set had a fine balance of new and old with four or five tracks from the recent album slotting in well with the older material  -  although the classics got the best reactions, of course. And, for me, the highlights were the songs from debut album Psychocandy
( which you can read about here at my fossilised 15 Albums blog )  -  The Hardest Walk, Taste Of Cindy, The Living End and my absolute fave You Trip Me Up. Of course, Just Like Honey got the biggest cheer of the night. Although not quite the feedback-drenched monsters they were back in the day, these songs are still classics of noise-pop and show off the much-underrated song-writing skills of the Reid brothers. One of my favourite lines in all pop music is still You Trip Me Up's "Love's like the mighty ocean / When it's frozen / That is your heart" and Jim Reid still sings it with all the melancholy it deserves. 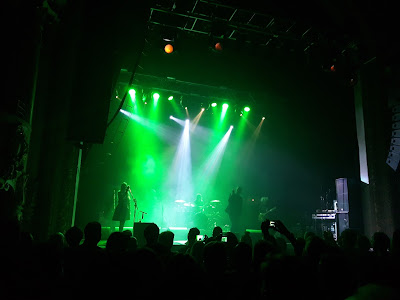 ( These photos aren't brilliant, I'm afraid. We started off quite close to the stage but at one point the crowd went a bit nuts and somebody stamped on Sarah's foot so we moved further back. )
The J&MC were never the most visually dazzling live act  -  William Reid still hangs around the back of the stage, summoning up squalls of guitar chaos and looking like a mad professor with his bird's nest hair, while brother Jim doesn't move too much but still commands the stage with his intensity. Before bubblegum noise classic Cherry Came Too, Jim said he hadn't sung this in years and wasn't sure if he was up to it  -  he was, his voice still that classic American-by-way-of-Glaswegian rock 'n' roll drawl. The backing band were fine but anonymous, with William's girlfriend ( sorry, not sure of her name ) adding some suitably ethereal vocals to the handful of duets scattered throughout the set. Although there were a few songs they didn't play that I would have loved to hear like Sidewalking or Never Understand, the set was a triumph, climaxing with a vicious Reverence, Jim spitting out "I want to die, I want to die" in full-on Iggy Pop mode.
Hopefully the brothers have managed to put aside their past differences and this newly revived Mary Chain can continue bringing us their idiosyncratic Velvet Underground / Shangri-Las mash-up... 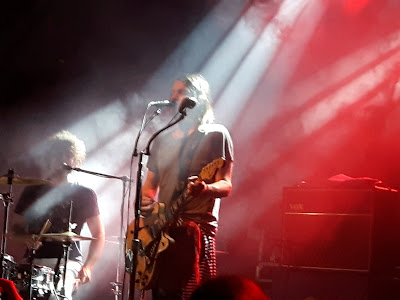 Back in February the Dandy Warhols were on yet another European jaunt ( when do they sleep? ) and, as my mate Glenn and I are on a semi-serious mission to see them in a different country each time they tour ( Amsterdam last time of course ) we booked up to see them in the beautiful city of Barcelona. And this time we took Sarah and Beki along too so we could all have a mini-break in the Catalan capital. We had a fantastic time in Barcelona but that's a post for another time... 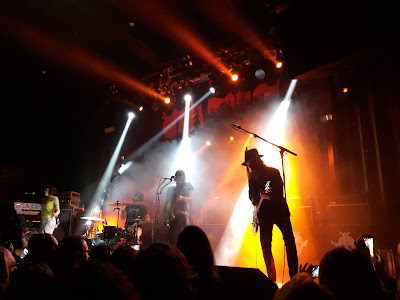 The venue this time was the Salo Apolo, another of those converted theatres we seem to end up in, very similar to the Bournemouth O2. It was about a twenty minute walk from our apartment which was ideal  -  we wandered down world-famous thoroughfare La Ramblas and followed the trail of mustachioed hipsters until we found the venue. 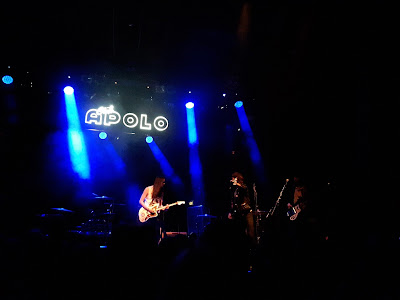 Support came from Welsh indie band Telegram who were okay really but not too exciting. They had a ramshackle, Libertines vibe and mostly incomprehensible vocals but some reasonable tunes and a cool, band-as-gang style  -  ones to watch in the future, methinks. ( Considering how close we live to the Welsh border we had a hell of a time deciphering the singer's between-songs banter. God only knows what the Catalonians thought of it! ) 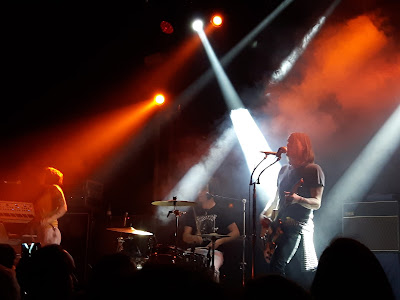 The Dandy's themselves were on top form, cool as feck considering the heat and pulling classic song after classic song out of the bag. Over the last few years they've become one of my most-watched bands ( I've seen them three times since last May alone ) and I've only grown to love them more. Although still occasionally self-indulgent they seem to have become more direct recently  -  even perennial one-before-the-closing-song Pete International Airport was edited down this time, catching me out when I thought I had time to get to the bar before ( also perennial ) last number Boys Better. The songs from the recent Distortland album are becoming more familiar and now fit perfectly alongside faves like Get Off, Godless and the inevitable Bohemian Like You. In fact, these newer songs work much better in a live situation, their sound boosted in comparison to the thin production on the record. Some Things You Gotta Get Over ( STYGGO ) and Catcher In The Rye are fast becoming mass crowd singalongs which must be gratifying for the band.
So, another great set from Portland's finest with each member of the band getting their chance to shine  -  the Dandy Warhols always give the impression of being a totally democratic band, a group of friends who love being together and just happen to make great music. 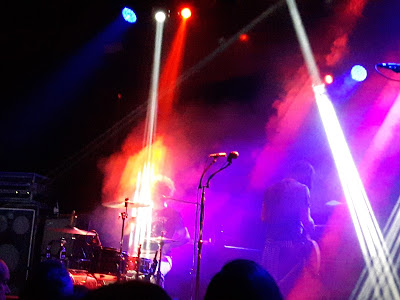 ( I love this shot  -  it looks like Brent's being beamed up to Planet Hipster! )
No DJ set / after show party from Zia this time, unfortunately, and no chance to chat to the band after the gig like on the last couple of occasions. In fact, the mood was slightly dampened by the extremely unfriendly Apolo staff who ushered everyone out of the building only minutes after the Dandy's had left the stage, even preventing people from using the toilets before they left the venue.
Apart from that it had been a great gig, made even more enjoyable by its setting, the fantastic city of Barcelona  -  more to follow on that subject :-)

I don't really know much about either band, Simon, so I'll just wish you and your family a Happy Easter instead!

Thanks John! I hope you and yours have a great Easter weekend.

They do indeed! Thanks for the comment mate. Next gig - The Skids! Should be awesome :-)