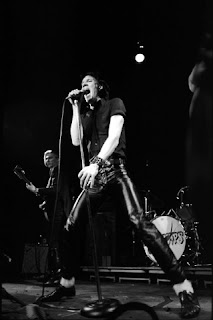 I've heard tonight that Lux Interior, frontman of The Cramps, died a couple of days ago of heart failure, aged 62. The Cramps's Wikipedia entry describes their music as garage rock / trash punk / psychobilly: pretty accurate for once. Lux and his wife Poison Ivy Rorshach were consummate rock 'n' rollers who synthesised all their passions ( 1950s rock and roll, trashy horror films, really tight leather trousers ) into one kick-ass, wild, unpredictable band. A lot like Keane, really  -  ho ho. The psychobilly genre of the '80s really comprised  a bunch of also-rans trying to be The Cramps, but failing. The Cramps were genuinely one of a kind.
"I've got a garbage brain that's driving me insane..."
RIP Lux Interior 21/10/1946  -  4/2/2009.
Soundtrack: Off The Bone by The Cramps.
Posted by cerebus660 at 23:42