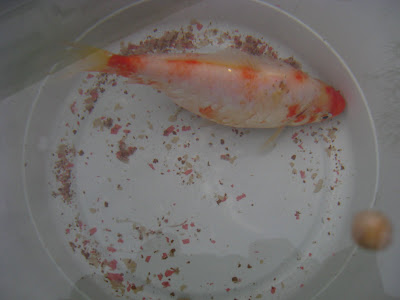 After a door-to-door campaign we found the owner of Nemo aka Lucky, the almost-frozen fish ( see post "Finding Nemo" 8/1/09 ). We took him back to his owner and I released our finny friend back into his home pond. The old guy seemed pleased to have him back, and said he thinks the goldfish might have been nabbed by Charcoal aka Smokey, one of Hero's feline friends. It's amazing to think that Nemo survived being fishnapped and dragged across two or three fences before being dropped on our patio. Tough little bugger.
Soundtrack: Life Itself by Bruce Springsteen ( pre-release download from the next album ).
Posted by cerebus660 at 21:29