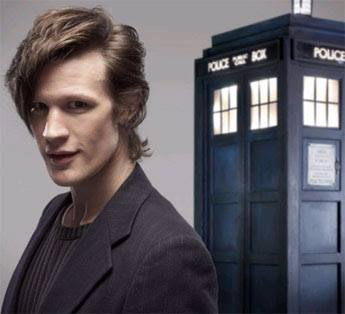 And t'internet goes into meltdown!
Steven Moffat and co. have totally blindsided the British public by announcing "an unknown" as the 11th Doctor. After the seemingly endless speculation about "older" actors like James Nesbitt, Bill Nighy, Paterson Joseph, Uncle Tom Cobley and all, the next Tardis occupant turns out to be a 26-year old! And not a woman either. Certainly interesting casting. I must admit I'm not overly familiar with Smith's work, but I did see him in The Ruby In The Smoke. The Moff says Matt Smith can convincingly portray the 900-year old Time Lord looking out through 20-something eyes, and he certainly has an unusual, young-old face ( Smith, not The Moff). It remains to be seen how the legions of DT fangirls/boys will cope with this upstart but, judging by his interview on tonight's Confidential, I think he is really promising. Only a year to wait...

Who the fuck's he?

Mr. Keeper, this f***er is the 11th Doctor! I know, it's not what anyone expected is it? However, Matt Smith has an interesting, if short, CV and has obviously impressed new Who showrunner Steven Moffat.Personally, as I said in my blog, I think he's got potential, although the age thing is a bit of a stumbling-block.Fingers crossed for 2010!