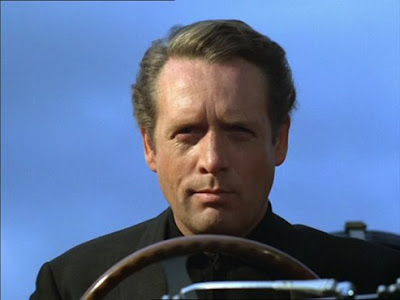 I've just heard the sad news that Patrick McGoohan has died at the age of 80. McGoohan was a veteran actor of stage and screen but was, of course, most well-known as the creator and star of The Prisoner. A unique and unusually intelligent spy-fi drama, The Prisoner tackled themes of identity, liberty and paranoia, all wrapped up in a very 1960's, surrealist package. McGoohan's ex-secret serviceman was gassed in his London flat and awoke to find himself in an unending, Kafka-esque daydream of incarceration, interrogation, false escapes and tea on the lawn. Given the name Number Six, he was forever trying to escape, to discover the unseen Number One and to outwit the different Number Twos and their attempts to find out the truth behind his resignation. This was the kind of show you could appreciate as a commentary on life and liberty or just enjoy as a weekly adventure, penny farthings and all. I watched The Prisoner when Channel 4 repeated it in the '80s and, apart from some obviously dated attitudes and dialogue, it stood up well in the decade of Reagan and The Thatch. There is apparently a remake in production, starring Jim Cavaziel and Ian McKellen, but I doubt if it could ever achieve the cultural significance of McGoohan's masterpiece.
Be seeing you...
RIP Patrick McGoohan 1928-2009.
Soundtrack: The Prisoner by The Clash.
Posted by cerebus660 at 19:43