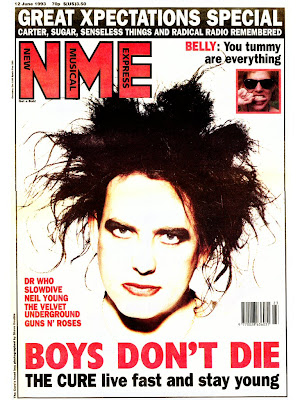 It's been a loooooong time since I've done a Fave Gig Fri. so I'm going to cheat a bit here and quote from an old diary. ( For anyone under the age of 40, a diary is like a blog, but made of paper. How quaint! ) I've done this once before and it's always worth having a laugh at the expense of your own younger self.
The gig in question was Great Xpectations, a fund/consciousness-raiser for the indie radio station Xfm, held in Finsbury Park back in June 1993. The headliners were the mighty Cure, as featured on the NME cover above.
So I'm going to blow the dust and cobwebs off my diary and take you back to the days of floppy fringes, lumberjack shirts and blokes in short trousers playing guitar, with sarcastic modern-day comments in italics:
Me and Sarah ( Sarah and I! ) drove down to London, parked somewhere near Leicester Square and got the Tube to Finsbury Park. ( I obviously had no idea about London geography in those days. ) We had a drink in a local pub - full of Goths - and then went into the park. We'd missed The Family Cat and just saw Kingmaker play their last song - not a great disappointment. The event was compered by Sean Hughes, who seemed to be wasting his time. The first band we saw was The Frank And Walters: Irish nutters in garishly-coloured Oxford/Cambridge uniforms. They belted out their poppy, infectious songs e.g. After All I Still Love You, Fashion Crisis Hits New York, This Is Not A Song etc. Sarah wasn't that keen on them, but I thought they were great. There were a couple of acoustic sets: two of the blokes from Blur ( Damon and Graham ) came on and did their recent single, For Tomorrow - pretty good; unfortunately we were also lumbered with Guy Chadwick from the House Of Love who did some bloody awful solo songs and virtually begged the audience to buy his records. Sad man.
Next up were the Senseless Things. We missed most of their set 'cos we went for a wander around the park ( just us and 20,000 people ), nosing around the stalls etc. They seemed quite good though, especially when doing the snarling, raging Homophobic Asshole. They were followed by Sugar who I'd been really looking forward to. Unfortunately, they were a bit of a let-down. ( Incisive comments as ever! ) Their sound was dodgy to start with - which obviously annoyed Bob Mould - and they had a tendency to thrash through songs that would have benefited from a more subtle approach. They were quite good but, being a fan of Husker Du ( Mould's previous band ) for all this time, I'd expected something better. ( I go on to talk about The Catherine Wheel, but who's interested in them? ) Anyway, Belly were a lot better. Tanya Donnelly and her "rock chick" bass-player bounced all over the stage, obviously having a great time. Their stuff is very catchy but has dark undercurrents in the lyrics e.g. Gepetto seems to be about rape or abuse, all wrapped up in breathy lyrics and a poppy tune. Great stuff. 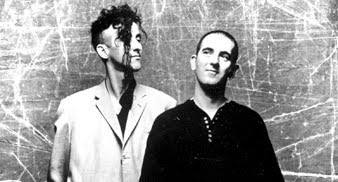 By now it was late afternoon but still very warm. ( Here's Tom with the weather! ) Next up were Carter The Unstoppable Sex Machine - Jim Bob and Fruit Bat. I'd always quite liked their songs ( Don't hold back! ) but with this gig I was converted. Me and Sarah ( grammar! ) went down the front to get crushed and become Carter fans. They charged through an energetic, crowd-pleasing set: The Only Living Boy In New Cross,Sheriff Fatman, Do Re Mi So Far So Good, a singalong GI Blues etc. etc. Although they come in for a lot of stick, I think they're one of the best British bands going. We had a good time and it set it up well for the headliners. 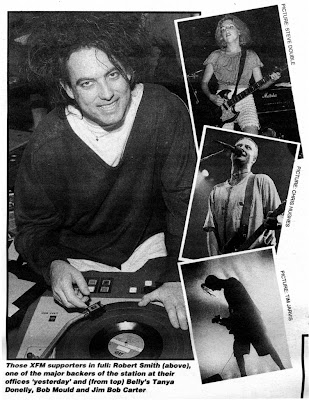 The Cure came on stage as the sun went down, the hippy/Goth mood only slightly spoiled by Bob Smith's lumberjack shirt. They played a good, varied set, from old favourites like Boys Don't Cry, and A Night Like This / Push ( yay! ) to the Wish album material. It soon became obvious that most of the 20,000+ people had come here to see The Cure. They got a great reaction and the atmosphere was brilliant. Sarah got up on my shoulders to get a better view and nearly got dropped a couple of times 'cos a woman behind us kept on tickling me. The dangers of rock 'n' roll or what?
Finally, it was all over and we attempted to battle our way out of the park. Police on horseback herded us like cattle onto the crowded Underground and we got the Tube back to Leicester Square. By now it was gone midnight and we were hungry so we went and got some huge pieces of pizza. Even though I had to get up for work 6 hours later and we were still over 100 miles from home, we had got to the stage where you think "sod it." We eventually headed for home - another epic journey involving getting bloody lost again. ( This happens to me a lot in London! ) After much farting about and stopping every 5 minutes to try and keep me awake ( some things don't change! ), we got home at 3:30am or some such ridiculous hour. Oh, well.
( I did manage to get to work the next day. I was driving a lorry back then, so I must have been knackered! Phew, rock 'n' roll! )
Posted by cerebus660 at 22:34

Sugar were crap, yeah? there's a shame. I was quite the fan back in the day, but I never got 'round to seeing them. Belly and Carter, on the other hand, I got to see a whole lot, and both were brilliant, every time. Fruitbat's mum used to play darts with my missus, so we used to get free tickets!

I've told this story before somewhere on me own blog, but I once spent an entire evening sitting outside the Island Queen pub in Islington holding forth to a bunch of goths on how shit the Cure were live, only to realise the following morning that the bunch of goths in question WERE ACTUALLY THE CURE, THEMSELVES!!!! to Robert Smith's credit, when I refered to the lead singer as "that cunt with the hair" he DID nod sagely, and say, " yeah, he's a twat, him."

Ha! I love that Cure story, Joe! Robert Smith did always have a sense of his own ridiculousness, more than most self-important Goths like the Sisters or the Cult.

Free tickets to Carter gigs sounds cool! I saw them live a couple more times and they were always a good laugh.

And, to be fair to Sugar, I think I caught them on an off day. They had a lot of sound/monitor problems and Bob was pretty pissed off: I remember him shouting out "Suck my dick!" to the sound man :-)
But maybe he just fancied him.....