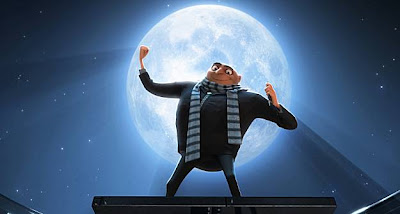 It's been an evening of high culture, fast food and evil geniuses tonight.
Whilst Sarah, Sophie and my auntie were enjoying an evening at the ballet, James and I opted for burgers and 3D villainy.
( Well, OK, we did see some of the ballet: Sophie was taking part in a dance workshop at Stroud's Cotswold Playhouse, ahead of the evening performance of Giselle. Very interesting to see a professional dance company rehearsing, and a great chance for Sophie to share a stage with them. )
After sampling the culinary delights of McDonald's, James and I headed to the local fleapit for the latest CGI kids' movie ( no, not the one about the owls ) - Despicable Me.
Very much in the tradition of The Incredibles, this is the story of Gru ( voiced by Steve Carrell ) an evil genius whose schemes tend towards the mediocre. The emergence of a younger, obnoxious new-villain-on-the-block, Vector, spurs Gru on to his most daring plan yet: to steal the Moon! Heh heh evil laugh etc. The vagaries of the plot force our villain-with-a-hidden-heart-of-gold to adopt three orphan girls to aid in his Vector vendetta. At first they are just a means to an end and an irritation to Gru but, inevitably, he learns to love them and ultimately changes his ways. So far, so predictable, but as new experiences like trips to theme parks and ballet lessons begin to take up Gru's time, there is much fun to be had as his black heart melts. 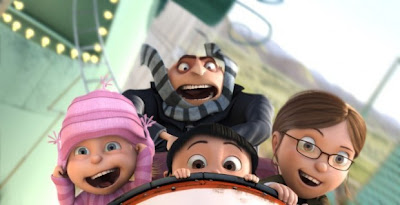 While not as funny or original as the Pixar films it tries to emulate, Despicable Me is still a charming, energetic film with some lovely design work and engaging characters. The 3D is used well, especially in the scenes of wild aircraft chases, rockets blasting to the Moon, and Gru's huge, underground lair. Which brings us to the film's real stars - Gru's henchmen. Dozens of little, bean-shaped yellow critters, all jabbering away and pratfalling in the background, and all fiercely loyal to their leader, the henchmen are a joy to watch.

After stepping back into the real 3D world ( no glasses required ) we picked up the ( hungry ) female contingent and went back to McD's yet again, where I was forced to eat more high calorie, low nutritional foodstuffs. Well, it'd be rude not to.
Soundtrack: Meddle by Pink Floyd ( maaaan )
Posted by cerebus660 at 00:34

I liked this one alot. It was sweet and the main character's change came easily because he relly wasn't that evil to begin with. Those henchmen should have their won Saturday morning cartoon if they made those anymore. Lot's of laughter out of their antics - eager to please always works.

i think henchmen are one of my favourite tropes of the superhero genre. there's so much you can do with them and they can be so much fun!

Thanks for commenting, guys. I think we could all use some henchmen from time to time :-)