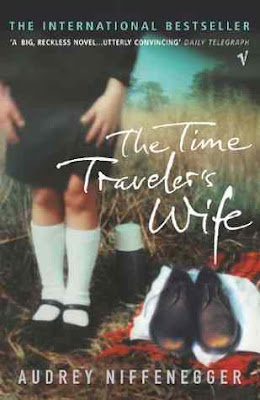 Ok, it's time to look back at my Books of 2008. These are books I've read in 2008, not ones necessarily published last year. I thought I'd better get this down for posterity 'cos the BBC weatherman said tonight that there will be, and I quote, "holes in the sky" tomorrow. Sounds a bit apocalyptic really...
The Time Traveler's Wife by Audrey Niffenegger.
It's said that you will have read the majority of your all-time favourite books by the time you're in your twenties ( or something like that). Well, at the advanced age of 42, I've discovered a novel that has leapfrogged straight into my Top 20. This is a wise, funny, sad and very human story of an affair between a very normal woman and a man who is "unstuck" in time, like Vonnegut's Billy Pilgrim. This condition is given a pseudo-scientific name of Chrono-Displacement and is the catalyst for a moving love story. A great book: it made me laugh, cry and think, you can't ask for much more.
The Affirmation / The Glamour / The Extremes by Christopher Priest.
Finally got round to reading some Christopher Priest. And I'm glad I did. All three approach the same themes from different angles: identity, memory, reality vs fiction. Fascinating, thought-provoking stuff, but very cool and detached. The Affirmation is probably the hardest to get into, but the most rewarding, with some stunning narrative shifts. The Glamour has a brilliant central conceit ( invisibility as a social phenomenon ), but does the ending go too far? The Extremes starts off as the most mainstream of the three, but heads off into ( Virtual ) unreality, and can be seen as a strange sort of companion piece to Ballard's Super-Cannes. I need to get hold of The Prestige next.
3 collections of Michael Moorcock's Eternal Champion tales :
The History Of The Runestaff: The Jewel In The Skull, The Mad God's Amulet, The Sword Of The Dawn. Corum: The Knight / Queen / King of Swords. Von Beck: The City In The Autumn Stars, The Warhound And The World's Pain, The Pleasure Gardens Of Phillippe Saggitarius.
Three of Moorcock's Eternal Champion avatars  -  Hawkmoon, Von Bek and Corum  -  all up to their necks in wars, quests, adventures, betrayals, alternate worlds etc. Plenty of exciting journeys, colourful characters and philosophical asides.
God Knows by Joseph Heller.
One of my absolute, all-time favourite novels is Heller's Catch-22, a 20th century classic. This is bound to pale in comparison, but is still a major work by a great author. The story of King David and his scandalous life: slaying Goliath, fighting Phillistines, chasing women, having arguments with God, taking on his own friends and family to create and lose a kingdom. All told in Heller's unique style. Hard work at times but worth it and often hilariously funny.
The rest:
Fantasy Of The 20th Century by Randy Broecker.
HMS "Surprise" by Patrick O'Brian.
Tithe by Holly Black.
Imperial Earth by Arthur C. Clarke.
Night Walk by Bob Shaw.
Super-Cannes by J.G. Ballard.
The Owl Service by Alan Garner.
I bought a few 2nd-hand books in Stroud yesterday, to start 2009's "to be read" list:
Jonathan Strange & Mr. Norrell by Susanna Clarke.
Beyond The Golden Stair by Hannes Bok.
Nova by Samuel R. Delany.
I also received a Penguin books box-set for Christmas: Boy's Own Adventures, featuring authors such as John Buchan, RL Stevenson, Verne, Anthony Hope and good old GK Chesterton, without whom this blog wouldn't have a name. A lot of reading there, should keep me busy.
Soundtrack: Crossing The Red Sea With The Adverts. ( Punk rock Heaven. )
Posted by cerebus660 at 00:34