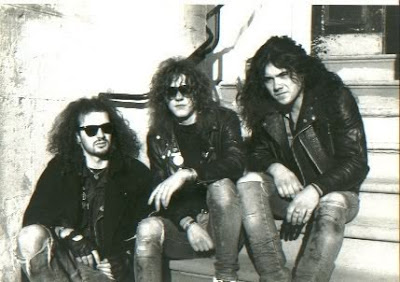 My Official Worst Gig Ever: The Screaming Ameebas / Death Planet Commandos, July 1988.
Not just your average bad gig - you know, boring band, arrogant frontman, grotty venue - but the Seventh Circle of Hell itself.
We ( that is, the semi-legendary Death Planet Commandos ) were supporting the Screaming Ameebas at a black hole of a venue called the Night Owl. We'd seen the Ameebas around the local scene and enjoyed their grubby, grebo rock ( anyone remember Zodiac Mindwarp? They did... ) - and their crazy spelling of the word "amoeba". Their singer/guitarist Martin seemed a nice enough bloke and I arranged a support slot with them in their home town of Cheltenham. 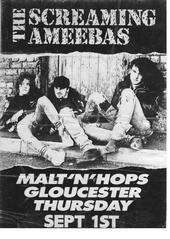 ( OK, the poster above is for a different venue, the late, lamented Malt 'n' Hops, but you get the idea. )
Now, we didn't play the sleazy, fuzzed-up Motorhead / PWEI / Crazyhead metal that the headliners churned out: we were a barely-serious hardcore band, influenced by The Ramones, The Adolescents, Agent Orange, Husker Du, and lots of other bands nobody had heard of, especially the Ameebas' home crowd. But we thought that, as we all made a big ol' rock 'n' roll racket, we'd get along fine. Right? Wrong.
After lugging our gear up 50 flights of stairs ( approximately ) we waited around seemingly forever while the Ameebas soundchecked. And soundchecked. It went on and on, mostly consisting of miking-up the drumkit to within an inch of its life. Our drummer, Paul the stick-insect, was allowed the grand total of one mike. We finally went on stage in front of a catatonic audience of stoners who barely lifted their heads to look at us. Just for a laugh we started with a punked-up cover of one of the Ameeba's own songs, only they weren't laughing. Not even slightly. Then the sound problems kicked in: we could barely hear each other play through the monitors, my guitar went seriously out of tune, I borrowed another one, all it produced was feedback. And while we were on stage, banging our heads against a musical brick wall, some kid called Tony was getting my17-year old girlfriend ( now my wife ) extremely pissed on vodka.....
After finishing our set, to mass indifference, we waited for the Ameebas to do their thing, which they did to almost the same level of apathy from the audience. Their audience. Christ, what a useless bunch of dopers! We asked Martin Ameeba for our money. He told us to see the club's owner. He told us to see the Ameebas. The upshot was we didn't get paid. We were none too impressed, but I have heard accounts of baseball bats being pulled on bands who demand their payment, so it could have been worse. I lugged my guitar, amp and extremely pissed girlfriend back down those 50 flights of stairs ( approximately ) and headed for home, vowing never to return to Cheltenham. After all that I caught major flak from Sarah's parents for getting her so drunk, even though I'd been on stage at the time and had been totally oblivious. ( This also had other repercussions that I won't go into here but they were not good. ) What a night.....
The next gig we played was at the afore-mentioned Malt 'n' Hops and was one of the best nights of my life. Rock 'n' Roll, eh?
Martin Ameeba now goes by the name of Ace and plays guitar for Skunk Anansie. ( Greatest Hits cd in the shops now! Get it for Christmas! )
Soundtrack: Automatic For The People by REM.
Posted by cerebus660 at 20:35

Martin Ameeba? You couldn't make this stuff up. Great story.

You know what, Matthew? I wish I had made it up: it was, as I said, my Worst Gig Ever.
Anyway, I promise something more positive next week :-)

So is the photo of you or the Ameeba's?
That does sound like a pretty terrible gig.

No, both the poster and the photo are of the Ameebas: we weren't that hairy! I'm hoping to post some more about my time as a 3-chords-only guitarist at some point. And hopefully I'll be able to dig up some photos ( no digital cameras in those days! ) so you can see what a hideous bunch the DPC were :-(

Nice report Si...I wasn't at the gig but I remember them well. To think the venue was the scene of such a wonderful gig by The Supernaturals too....
Gigs are funny things, sometimes you expect the best and have a total nitemare, other times the reverse. Still, the lyrics to Jesus Stole My Skateboard will stick with me forever...
Cheers,
Glenn

Hi Glenn, thanks for commenting! Yeah, that Supernaturals gig was great, wasn't it? I'll have to do a Fave Gig Fri about them, a sadly missed band.
Jesus Stole My Skateboard? I set out to write the dumbest song ever and I think I succeeded, but I'm glad you remember it.

BTW when are you gonna start bloggin'? Go on, you know you want to...