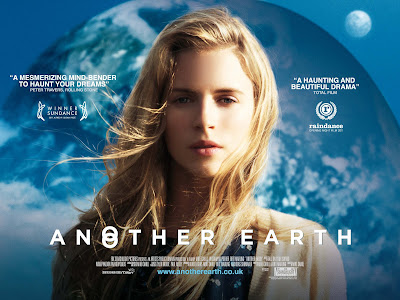 Sometimes it's worth remembering that Science Fiction doesn't have to be all about spaceships, artificial intelligence and time travel. Another Earth is an unusual, haunting little film, more in the mold of the New Wave SF of the late '60s / early '70s. It uses the so-called "One Gimme" approach - it's set in what is recognisably our world but one thing has changed: another, identical Earth has suddenly and mysteriously appeared in the sky. Ignoring any of the "Hard SF" questions ( how did it get there? why isn't its gravity wrecking our own Earth? etc. ) the film asks more human, emotional questions: what would its appearance mean to people? how would you react if you knew you were duplicated on another planet? what if you could travel to this new world? 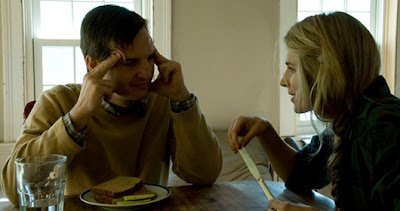 Co-writer and star Brit Marling plays Rhoda, a physics student with a bright future ahead of her... until, on the night the new Earth first appears, she drunkenly crashes her car, killing a composer's family and leaving him alive but an emotionally broken man. After four years in jail Rhoda returns home but is unable to function in the outside world, can't connect with her parents and even attempts suicide. By chance she discovers the bereaved man's identity and decides to try and help him. She poses as an agency cleaner and, while she cleans his neglected house, she also attempts to rebuild his shattered life. Slowly, they become friends and then lovers but, all the while, John ( William Mapother ) is unaware of Rhoda's identity. And then she finds that she may have a chance for a new life on the other Earth... 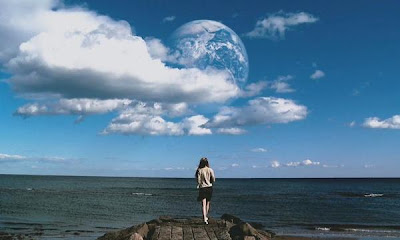 Another Earth is a subtle, cool ( as in "chilly" ) film with a jittery, scratchy style and plenty of food for thought, leading neatly to a lovely, ambiguous ending. Although more a relationship drama than a true Science Fiction film, the SF concepts are ticking away in the background, just like the new Earth, unobtrusively hanging in the sky in virtually every exterior shot. The two leads are excellent as damaged, disconnected people, hesitantly reaching out to each other and hoping for some redemption. The gorgeous and talented Brit Marling, in particular, is a star in the making, her melancholy presence shining in many almost dialogue-free scenes. The lo-fi soundtrack by Fall On Your Sword is worth a mention, too: nervy and atmospheric, it perfectly complements the low-key visuals and naturalistic acting.
Rating:
Four out of Five New Earths
( Oh, I should also mention that this was another film viewed at Gloucester's wonderful Guildhall Arts Centre. Always a pleasure. )
Posted by cerebus660 at 21:27