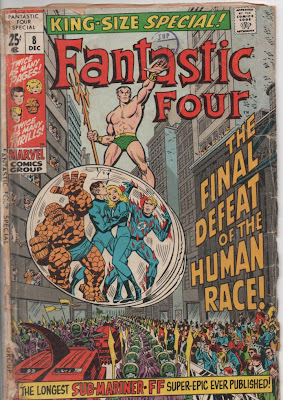 Although, as mentioned here, the first issue of the FF I ever owned was no. 106 from January 1971, I also somehow acquired this FF Special/Annual from December 1970. My mist-shrouded memory insists that I got this comic years later but that can't be right, unless I was given it second-hand by one of those strange kids who gave away their comics instead of collecting them. Imagine that? Hard to believe I know...
Anyway, behind this wonderful Johnny Romita cover is a treasure-trove of Lee and Kirby reprints from FF Annual no.1, starting with the epic "Sub-Mariner Versus The Human Race" in which Namor and his armies and undersea beasties invade New York. The longest FF story to date, when first published back in 1963, this is a Fantastically entertaining tale involving sea monsters, the FF going on an Atlantic cruise (!), Namor in disguise addressing the UN ( including Nikita Khrushchev ), a quick digression into Atlantean history, undersea armies conquering Manhattan, and the Thing saying "Whew!! That animated hunk of walkin' seaweed has more lives than a blasted cat!"
The issue also comes complete with some of those charming little extras that seemingly only Silver Age comics could boast: a gallery of the FF's greatest foes ( lovely Kirby images of Doc Doom, the Impossible Man, the Red Ghost etc. ) and a two-page question and answer section about the FF's abilities and interests, where we learn that Johnny's favourite hobbies are "sports cars, jazz records and girls ( though not necessarily in that order )" and Ben's are "weight-lifting, reading adventure stories and wise-cracking..."
At the risk of sounding redundant, they really don't make 'em like that any more...
Posted by cerebus660 at 19:09

I've got this one as well. As you say, it's essentially a reprint of the first annual, but without the two backup strips. Nice 'though.

It's great stuff but the lack of the other two strips does show how much the page counts of these Annuals / Specials had already declined by 1970...