Midnight In Paris / My Week With Marilyn 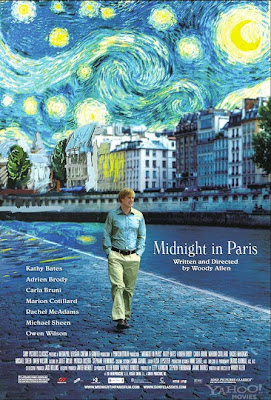 Sometimes you need to get away from the multiplex, away from the boy wizards and robots-in-disguise, and away from the twenty-first century altogether.
I've seen a couple of films recently at my favourite venue, Gloucester's Guildhall Arts Centre, a place where I've spent many a night jumping up and down to loud rock music, but haven't frequented as a movie-house. Which was my loss, obviously. 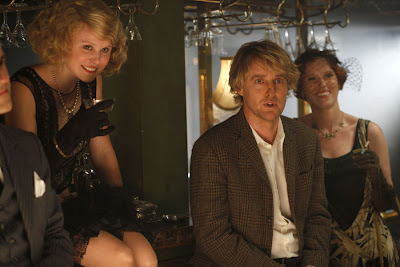 First up was Woody Allen's latest, Midnight In Paris. Although I've been a fan of the Woodster ( as nobody calls him ) for many years, I've never seen any of his movies on the big screen before. I was too young for the glory days of Annie Hall, Manhattan etc. and a lot of his later films haven't really grabbed me. Midnight In Paris, however, is something different: a romantic comedy / drama / time-travel movie (!), somewhat in the vein of his earlier A Midsummer Night's Sex Comedy.
Young(ish) engaged couple, Gil ( Owen Wilson ) and Inez ( Rachel McAdams ) are holidaying in Paris with her awful Republican parents. Gil is a successful Hollywood screenwriter but feels he's just a hack and longs to be a novelist, preferably one living in the Jazz Age of Gay Paree, while Inez is mostly concerned with buying hideous objets d'art and hanging around with her former tutor / lover, Michael Sheen's pompous Paul. One evening, while his companions head out to a club, an inebriated Gil decides to walk the Parisian streets to clear his head, only to find himself picked up by a bunch of champagne-swigging revellers in an old car and somehow whisked back in time to Paris in the '20s. Here he meets a veritable Who's Who of Jazz Age stars: Hemingway, TS Eliot, Gertrude Stein, the Fitzgeralds, Picasso, Dali, Man Ray, and many more. Gil can't believe his luck as he gets to meet and party with his heroes... but he also starts to doubt his sanity. Over a few nights of time-travelling he falls in love with Adriana, muse to the stars, as played by the luminous Marion Cotillard... 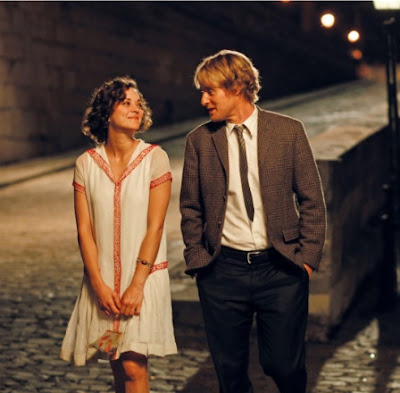 Midnight In Paris is a beautifully shot, warm, witty and romantic fantasy. The footage of Paris itself is exquisite ( if a little "chocolate box"-y ) and had me reaching for my passport. Owen Wilson ( an actor I've never been too bothered about before ) is fine as poor, romantic Gil, in way over his head; Marion Cotillard is as elegant and full of life as ever; Michael Sheen is wonderfully slimy as the pontificating professor who meets his match in Carla Bruni's museum guide; and there are some memorable performances from Kathy Bates as Gertrude Stein, Corey Stoll as a testosterone-fuelled Hemingway, Adrien Brody almost stealing the movie as Dali, and a beautifully vulnerable Alison Pill as Zelda Fitzgerald. Although a fairly lightweight movie ( especially compared with some of Woody's more serious works ) Midnight... is not afraid to make the point that nostalgia is all well and good, but it's too easy to idolise the past and forget to live today. Gil sees the Jazz decade as being a Golden Age, but '20s socialite Adriana yearns for the turn of the century Belle Epoque, and when they are both transported further back in time they discover that artists such as Matisse are similarly misty-eyed about the days of the Renaissance. And so it goes. 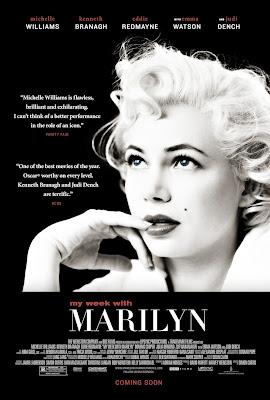 Last week we again went to the Guildhall ( it's becoming a habit! ), this time to see My Week With Marilyn, the allegedly-true story of a young Englishman's affair with Marilyn Monroe. Colin Clark was a would-be film-maker who got a job with Laurence Olivier's production company in 1956 and wound up working on the limp comedy The Prince And The Showgirl. As Third Assistant Director he was basically "Larry" Olivier's gopher but soon became confidant and lover ( so the story goes ) to the biggest female movie star in the world... 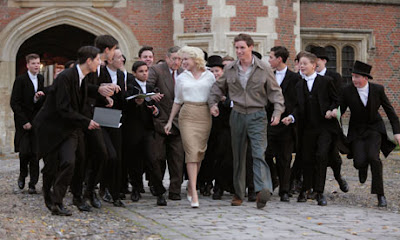 My Week With Marilyn chronicles the disastrous meeting between two schools of acting: the old, theatre-based style of the great Olivier and the modern, "Method" style as attempted by Marilyn. I say "attempted" because Ms. Monroe, at this point in her career, was notoriously incapable of learning her lines or turning up to set on time. The film shows Olivier trying to deal with a Marilyn whose marriage to her third husband ( Arthur Miller ) is on the rocks after only a matter of days, who is constantly doped-up to combat her nerves and insomnia, and who is accompanied at all times by interfering Method guru Paula Strasberg ( Zoe Wanamaker ), much to Olivier's fury.
The scenes of film-making - the Rank studios, union in-fighting, constant delays, tea and biscuits - are a wonderful peek into a drab, post-war, very English movie world, a million miles from Tinseltown. The usual thespian suspects are present and correct: Judi Dench as a warm, ever-considerate Dame Sybil Thorndike, Derek Jacobi as a royal librarian, a feisty Emma Watson as Colin's put-upon girlfriend, and Kenneth Branagh in probably his dream role as England's greatest Shakespearean actor. 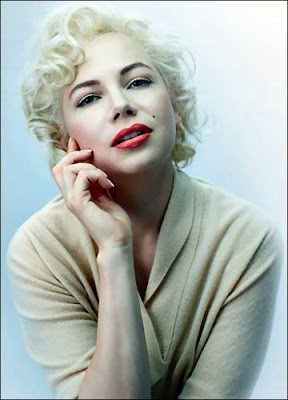 But the film belongs, of course, to Michelle Williams as Marilyn. By turns vulnerable, flighty, neurotic, funny, harsh and very sexy, without being the cartoon-Marilyn of a thousand impersonations, Ms. Williams' performance is spookily accurate, and it's only her slightly slimmer physique that stops her from being Marilyn reborn. She perfectly conveys the disconnect between Marilyn's public and private personae ( facing a crowd at one point, she says to Colin "Shall I be her?" as she puts on the Marilyn glamour for their approval ) and her yearning for a family life she was fated to never have. The only weak link here is Eddie Redmayne as Colin. The character comes across as naive and wide-eyed, but still strong in his desire to protect and love the American beauty. However, there is very little else to the character beyond his obsession with Marilyn; and his treatment of Emma Watson's Lucy doesn't endear him to the viewer. He's really there to stare in wonder, on our behalf, at one of the greatest stars of her time...
( While I'm on the subject of the Guildhall Cinema, I'll just mention that this week I went to the first meeting of the Film Focus Group, a monthly meeting to decide which films will be shown at the Guildhall in coming months. I didn't know what to expect, really, but I'm always interested in movies and I'm a keen supporter of the Guildhall, so I thought I'd give it a try. It turned out to be an interesting evening with a real cross-section of people there, from young film students, to bloggers, to former projectionists and amateur film-makers. The ages ranged from early twenties to one very outspoken 81-year old. The selection of films under consideration wasn't too hot, but we watched trailers and debated them, and also talked about ourselves and our interests in film. I definitely enjoyed it and plan to go again next month. )
Posted by cerebus660 at 20:33

Nice reviews. Makes me want to go and see them.

Hi Kid! Glad I'm not the only one up at this ungodly hour :-)
I'd definitely recommend those two movies. As I said, it made a change for me from the usual multiplex fare. And Michelle and Marion are well worth watching!

The great thing about the Guildhall cinema is that they put small tables amongst the seats so you've got somewhere to put your pint (the bar being in the next room, so you can nip out for a pint at a quiet moment - or in my case send my mate Steve). Much more civilised than a multiplex. I haven't been for a while - last time was Star Trek I think, me and Steve having failed to organise a trip to the big cinema. I also love that they show trailers for films that you know will never be on at the main cinema. When we were at Star Trek they showed a trailer for Frequently Asked Questions About Time Travel which stuck in my memory for ages until they showed in on Channel 4, Great movie.

that "anonymous" comment was from me by the way. clicked on the wrong thing

Hi Mark! The relaxed vibe of the Guildhall cinema is a contrast to the usual movie-going experience, alright. I really should have checked it out years ago...

BTW Is the "Steve" you mentioned Steve Venn? I think he was at the Focus Group meeting the other night.

No, it was Steve Hannis who you probably met at my birthday party. I haven't seen Steve Venn in a couple of years. Should have invited him to my birthday now that I think about it.

Bollocks! Did it again!

I live in Bedford, and we got bugger all like that here. I had to go to Oxford to see We Need To Talk About Kevin ( that's a good film - if you haven't seen it, do ). no rep cinema here, either.

last time I saw Woody Allen at a Cinema was Purple Rose of Cairo, which, I think, was the last film of his that I really loved, but I will end up seeing Paris. I was a big fan, once, and, you know how it is. it's a bit like listening to Paul Weller albums, hoping that one day one of them will be magic, again, even though you know it's never going to happen. I feel a poking a wobbly tooth with your tongue analogy coming on.

Hi Joe!
We are lucky to have a local cinema that provides an outlet for less mainstream films. Saying that, I'm off to see War Horse tonight at our local multiplex :-)

And, as for Paul Weller, I'm not going to hold my breath waiting...

The lasty Woody Allen movie I saw at a cinema was Annie Hall in the Odeon (I think) in Southsea in 1978. That was the 2nd time I'd seen it, the first being in EK when it first came out. EK used to have the first purpose-built cinema in the UK since the 2nd World War, until it was turned into a Bingo hall in 1988. It also had the largest screen in Scotland.

Kid, you can reminisce all you want. It's always good to hear from you.

After watching Midnight In Paris it occurred to me that I don't own any Woody Allen films on DVD. I'll have to do something about that! Annie Hall and Manhattan will be top of the list...