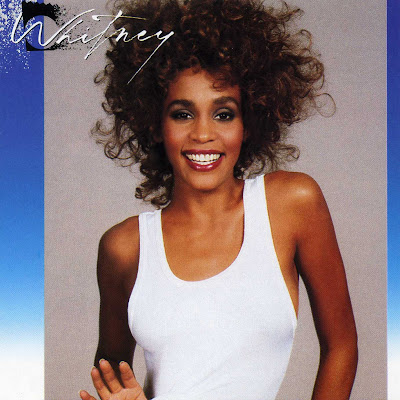 Very sad to hear today of the untimely death of the once-great Whitney Houston. I know her life had turned into a very public farce in recent years, but I still remember her as a fantastic singer and a very beautiful young woman. I bought her first album way back in 1985 after being impressed with her soulful vocals on the singles All At Once and Saving All My Love For You. Megastardom followed for the ( at the time ) clean-living Christian Whitney and, I must confess, I mostly lost interest in her work when she started performing over-sung, slushy ballads like the monster hit I Will Always Love You. Occasionally one of her songs would show a return to form like the funky It's Not Right But It's Okay - a strangely prescient song title.
But now she's gone, at a ridiculously early age, and a fallen star has risen for the last time. Above is the Whitney that I remember, from the cover of her second album, a talented and beautiful role model for African-American women, long before the drink, drugs and Bobby bloody Brown.
Rest in peace, Whitney...
Whitney Houston
9th August 1963 - 11th February 2012
Posted by cerebus660 at 18:39

I am more angry with her for pissing away the enormous talent that she was gifted with. She has all the help for her problems that she could have wanted and chose not to take advantage of it. Pathetic.

I remember buying her single "I wanna dance with somebody" back in - when? Early or mid-'80s - whenever it first came out. The cover of the single had a similar one to that of the album in your post. I've still got it, in fact. I probably bought it more for the cover than the actual record, because I never bought anything else of hers. Yeah, shame.

@Cal
I'm sure only Whitney's close friends and family know the truth about what help she received - we can only speculate. The sad fact is that, in the "real" world beyond the internet, some people have problems that never go away and are defeated by them.

@Kid
That single was from her second album, "Whitney", and in 1987 it always seemed to be on the pub jukebox when I was on my lunch break. ( Ah, the days of going down the pub for lunch! )