Doctor Who: Robot Of Sherwood ( review with spoilers ) 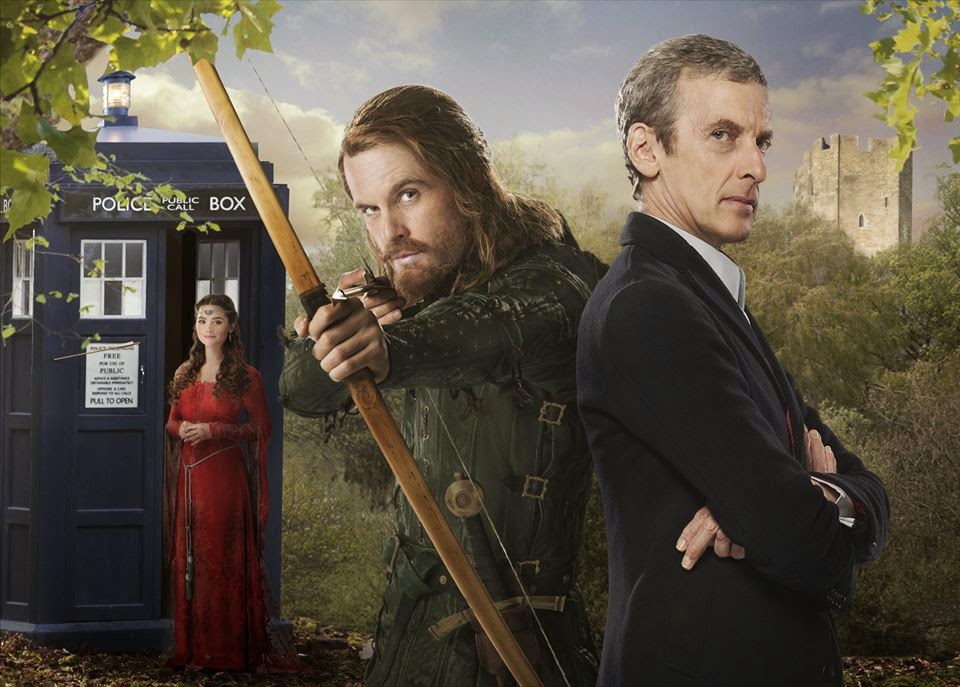 "No damsels in distress, no pretty castles, no such thing as Robin Hood..."
This week, the Doctor and Clara drop into Sherwood Forest in 1190 AD ( -ish ) to meet the legendary outlaw Robin Hood and aid him in his struggle against the evil Sheriff of Nottingham. Or, they would if Robin Hood were real. As the Doctor points out "Old-fashioned heroes only exist in old-fashioned storybooks, Clara". But who, then, is this dashing character in Lincoln green who laughs in the face of danger and protects the good people of Nottingham from the Sheriff's mysterious metal knights? Can he really be England's greatest hero? And what of the Doctor? How will he react when he becomes a part of somebody else's legend...? 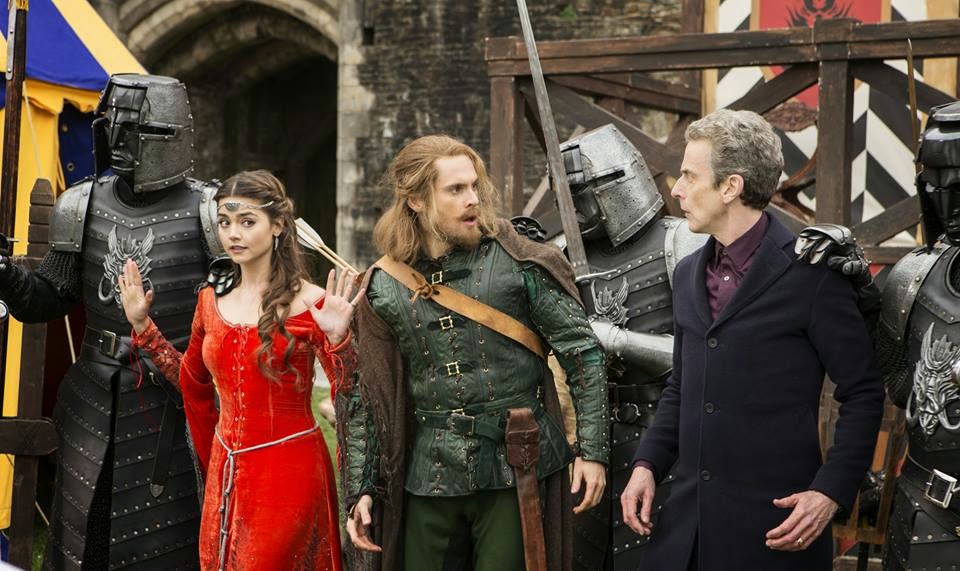 Unfortunately, this episode is the first misstep of the new series in my opinion. Writer Mark Gatiss has written a few stories for the show since 2005, veering from the sublime ( The Unquiet Dead, Cold War ) to the distinctly average ( The Idiot's Lantern, Night Terrors ). Robot Of Sherwood falls more into the second, er, camp. It's not bad... it's just unexceptional. 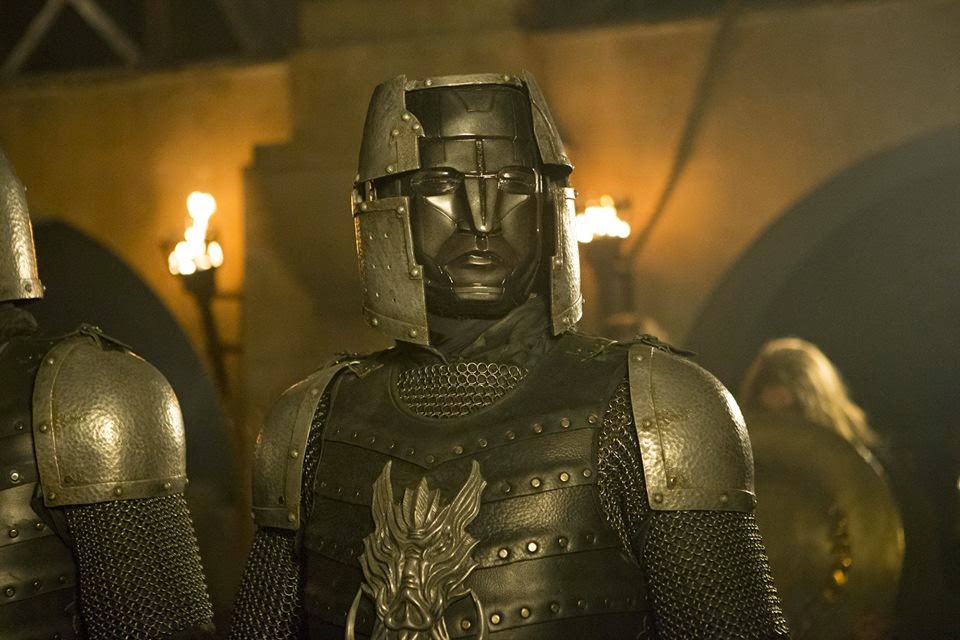 The biggest problem is that the almost constant bickering between the Doctor and Robin becomes irritating very quickly and has the unwanted result of making the Doctor look childish and petty. The humour is often forced and weak, although there are a couple of good gags about Errol Flynn and the North of England. It's not really enough, though. Another major concern is that this is ( Spoilers! ) yet another of what have come to be known as " broken switch" stories. The robotic alien knights have crashed to Earth and need gold, looted from the people of Nottingham, to repair their spaceship. It's bad enough that we've seen this kind of story too many times before ( The Girl In The Fireplace, The Lodger, The God Complex ) but the last example was only two episodes ago! This really is poor planning on Steven Moffatt's part.

So, what's good about this story then? It all looks great, with some fine sets, costumes and direction. Tom Riley steals the show as the larger-than-life, laughing-out-loud Robin Hood, charming Clara and hurling insults at that "bony rascal" the Doctor. The other "name" guest actor, Ben Miller, also has a great time playing the vain, egotistical Sheriff. The robots, while having no personality whatsoever
( unsurprising for robots, I suppose ), look suitably imposing and their crucifix-laser-beam stare is a cool effect. Gatiss' script, while nowhere near as witty or clever as it could have been, has some nice touches: a couple of quotes from Karl Marx (!), the odd call-back to the Pertwee era and some insightful thoughts on the importance of legends and heroes. Oh, and Jenna Coleman looks absolutely lovely in her faux-mediaeval gown: 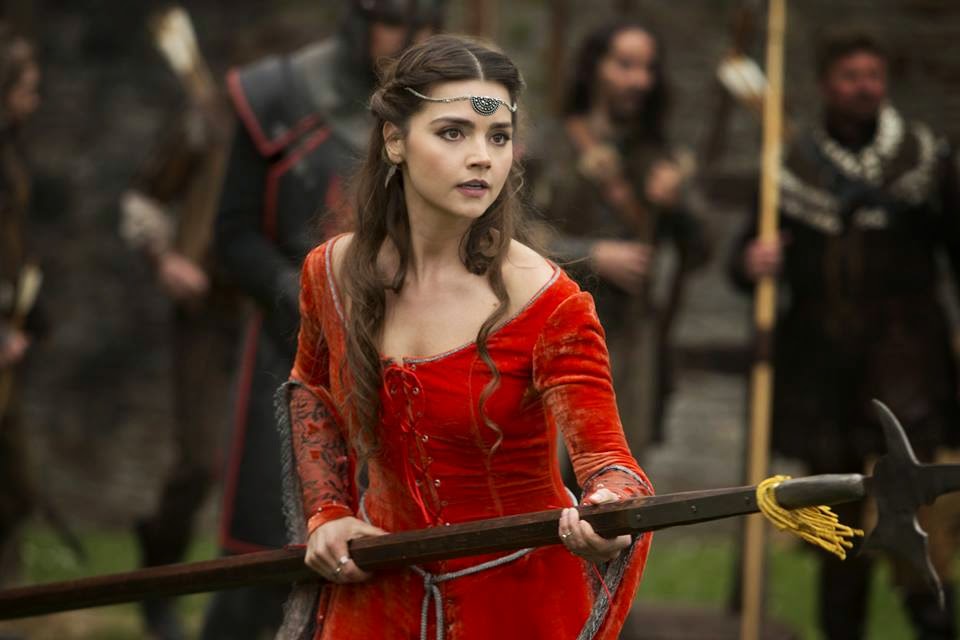 Definitely a case of "must try harder" then. Hopefully, next week's Moffatt-scripted spook-a-thon should bring the series back on track. For now, I'll give this one  -
Three Out of Five Sonic Screwdrivers ( or broken arrows )

What annoyed me about this one was that yet again the Doctor was presented as a wise-cracking comedy character with no sense of authority or menace about him. I'm beginning to wonder if these scripts were leftovers, originally designed for Matt Smith. I think they need to bring in another companion who can do the banter and leave the Doctor to smoulder in the background until he goes into action. Still too much inane chatter about him.

Well said to both of you. All I could think of with this Robin Hood was that it was an incredibly faithful homage to Rik Mayall's smug Robin in Blackadder Back and Forth...and that Capaldi was playing Edmund Blackadder if Alexei Sayle had somehow been cast in the role instead of Rowan Atkinson. They really could have pulled back the comedy lever several degrees and come out with a more effective end result.

Also, Clara continues her lifelong trend of having whatever personality that week's script calls for, whether or not it has anything to do with or bears any relationship to how she's behaved in any previous appearance.

(P.S.: sorry I haven't paid my respects around these parts recently -- please know that I'm a constant and faithful reader, always!)

I think there must be something up with me. It's the only story I've enjoyed so far in this year's series.

@Kid
I've got a feeling you're right about the scripts. Of course, this is a transitional period and I get the impression that the production team are breaking in the much-vaunted "new approach" slowly.

@Richard
I'm glad you're still around. Always good to hear from you :-)

@Steve
I've watched this episode about 2 1/2 times and it's definitely grown on me, although I do still find it lacking somewhat...